Wow…what a day on the river. The sunshine was just fabulous.  Winds averaged N14 we arrived at Lock 52 right around 2 pm. Marty the Lock Master informed us we would have another 2 1/2 hour wait. Well, that two in a half hours went by and Beauty was still floating with her crew on board. Captain Bryce listened faithfully to the VHS radio. While the Admiral (Jane) was getting restless. Maybe she was even getting a bit snippy with the captain. When all of a sudden a voice came over the radio. It was a tow requesting a lift up the lock. Marty came across the VHS telling him to go to channel 14. Capt. Bryce followed the call to hear what was going on. When he heard Marty say, “I have two pleasure crafts I have to get through the locks by dark.” Said the young man on the static VHS!  Then he went on explaining what the line up was going to be for all the tows and barges.

The Admiral looked over at her captain her eyes were full of disappointment. He didn’t say a word put hugged her. When all of a sudden they were distracted by what they heard Marty say: we have a priority 1 coming in. That means nothing goes through the locks until this vessel does. After that we will get the pleasure crafts through. That would be us going North and a power boat coming from the south. The priority one vessel is the Delta Mariner a cargo ship 300 feet long by 85 feet wide carrying delta rockets.

Rear door where delta and atlas rockets are loaded.

Finally our call came around 7:30 pm to position Beauty to enter the lock after the power boat exits the lock. It was a dark night Bryce handed me the new spot light (thank you Justin & Tera) I went up on the bow and shined the light on the approach entrance of the lock. There was only a smiley face of the moon shining, not given off much light. As we were moving slowly into the locks I heard a voice coming From above. Lol.. A man was standing on the side lock. He yelled down” Are you floating?” I yelled back up to him and said yes, he nodded ok. But then he said to try and keep it at this end of the lock. Lock 52 is 110 x 1200 and we had it all to ourselves.  Ok, wait a minute! More to the story that’s not the end. It must of taken an hour to fill up that lock. When the door open my eyes about popped out of my eye sockets. There was a barge and tow 800 x 90 feet blocking the exit! Bryce hailed the tow captain and told him we neede 16 feet of space to get by him. He replied back and said we had more then enough room to get by. As we approached the tow, I shined the light on the side of he lock and on the side of the barge plus the barge had a huge spot light shining. I really don’t know how Bryce squeezed us through but we made it. George was watching too.

We anchored near Paducah Kentucky for the night; we were both exhausted. Our anchor alarm sounded around 4:30 am.  The wind had swung us around toward shore so we pulled up anchor and headed up the Tennessee River to the Kentucky dam Lock.  Here it is, our first sunrise on the Tennessee River. 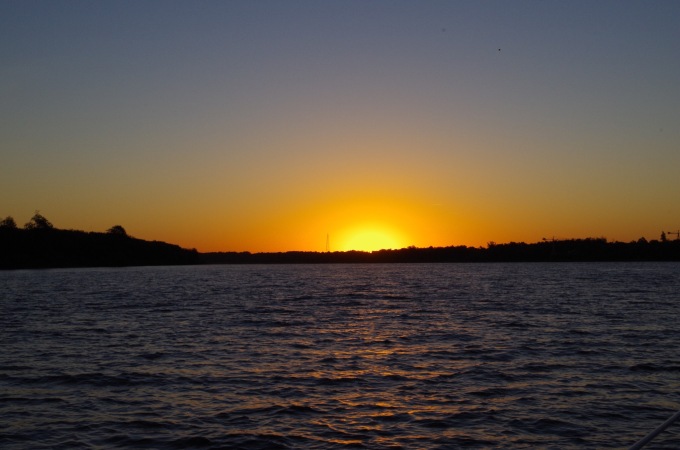 At first Bryce thought we had a tree branch headed towards us. Then he looked again. Jane he yelled. I was doing dishes. “Come quick, look there are 4 deer swimming across the river.”

They made it to the other side.  They must be warm blooded. 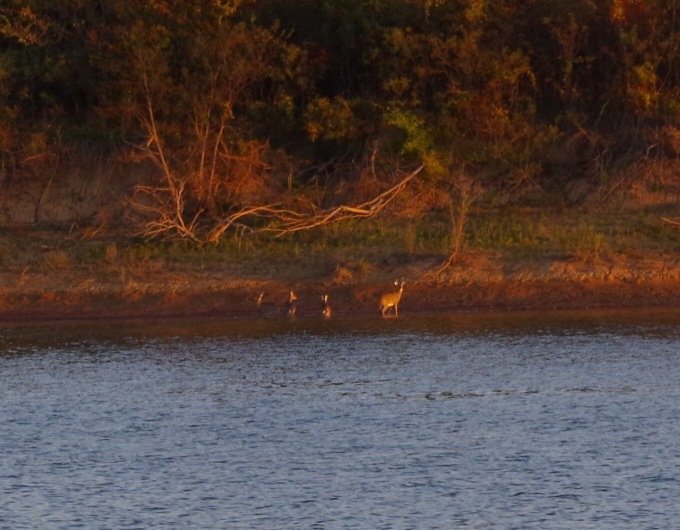 We made it through the Kentucky Lock without any issues and we did not have to wait.  It’s a good thing we left at 4 am.  At mile 22.5 the Kentucky lock lifted us 57 feet. The highest lift so far on our trip.  It is a single chamber lock 110 x 600 feet. Because of  the high lift the lock had some turbulence as the water rose. The lock master had us tie to the last  floating bollards. The put us directly in front of the exit doors.  They looked huge in front of us. 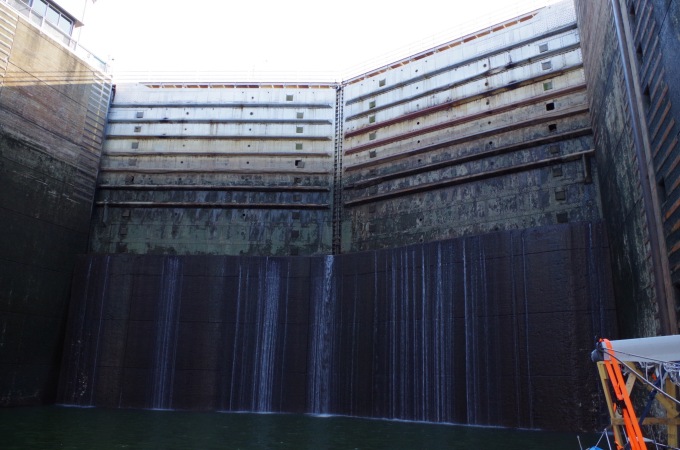 We were the only ones in the lock. As we approached the lock the Lock master said we had to wait for three higher priorities (than us). A few minutes later he hailed us on the VHF. The other vessels all okayed us to go in first before them.  That was nice of them!

What a spectacular view the water is blue. This is the lock after we proceed out .

The Kentucky Damn Marina is just on the south side of the lock. We are going to spend a few days here.  I am going to the beauty solon. I am having withdrawals.