Friday was an amazing night. There were people gathered from all over on the first Friday of every month to enjoy all the restaurants and bands in the streets.  Its called “First Friday”. If the restaurants don’t have tables out on the side walks they will on this Friday. The band was great.

Meeting new friends is always a blessing. Minna and I had a great time talking. Patrick was a hoot too. They are not a couple just two new friends too.   The race car history was explained to us by the gentleman in the red shirt.  Unfortunately, between a bit too much beer and the excitement of the moment I missed his name.

This is a picture of a present opening. It was really cool to see. 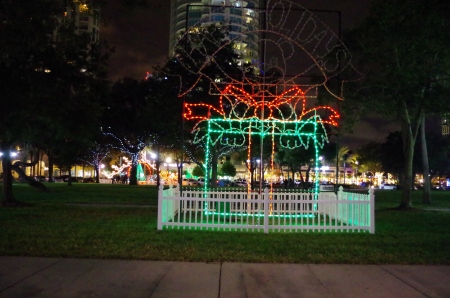 On our way into St. Petersburg, I was invited to attend a gathering hosted by “Women Who Sail” for breakfast Saturday morning. They had a guest speaker: Sally Gardiner-Smith. She is young girl who sailed from Main to the Bahamas. She shared her trials and tribulations. She was just 19 and graduated high schooling wanted to do this trip before she started college. Sally is the young lady in the dark hair sitting at the table. With her, was another young lady Kris in blue who organized this event. 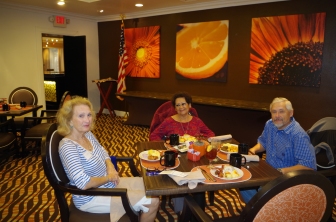 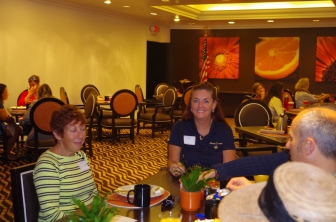 After the breakfast we headed out to watch the Christmas parade. The streets filled with folks from all over. The couple standing next to us was from Germany.I really liked the carriages & horses 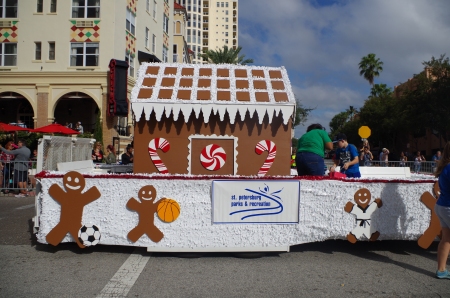 This has to be the longest parade! We enjoyed over two hours of it.LOL 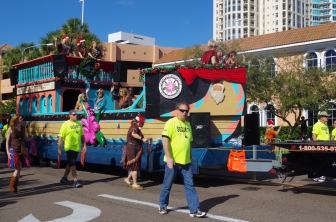 Later that evening we had the opportunity to join some new friends who treated us to diner.  Ana & Eidrian Garcia; some of the best people we will ever meet.  We had met them a few nights prior.  We were all looking at the christmas lights and we struck up a conversation. They also invited their long time freinds Bill and Mariam to diner with us.  It was a memorable evening.  We ate at Birchwood and later took the elevator to the canopy to enjoy a view of the city.  Ana and Eidrian in the center.  It was the highlight of the weekend.

While here in Florida we rented a car. Sunday, Bryce took me over to Cocoa to visit my sister Janette. Keegin is so cute. He is my sister’s youngest grandson. It was just perfect timing that her daughter Megan & boys flew in from Michigan and Katie flew in from Arizona. Our brother Joe and father John joined us too. What a great day. Janette just had her pool redone with new pavers laid inside a new screened in area. Looks really nice. 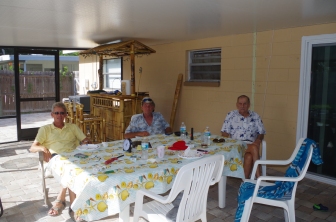 We went over to see the Atlas rocket launch at 4:45 p.m on Cocoa beach. It was taking supplies to the international Space Station. We had a great time but the clouds rolled in and blocked the view of the rocket.  We heard it though!!

We have really enjoyed our visit here in St. Petersburg. Tomorrow we are sailing out and headed to Sarasota.

2 thoughts on “A Great Weekend with New Friends & Family”