Good morning form the seawall  in dismal Swamp.  We had a great night tied up on the wall.  Very peaceful.  The boat in front of us belongs to Ben who we met down at the Elizabeth docks.  He didn’t come out of his boat much, but it was nice to visit with him when he did.

While Bryce worked, I when out and took a walk.   It’s funny because the wall we doc on is actually  a rest area for highway 17.  So cars came in and out all during the day.  The ladies working inside the rest area were so helpful.  I filled out the computer info about our boat for them.  They get funding for the Dismal Swamp and it is very important for boaters to stop by and register.  I looked at my watch Bryce; would soon be done with work.  Then we would take a walk over to the State Park and see the history of the Dismal Swamp.

Wow.. The State Park was Awesome had great displays of time past!  Talk about learning a lot… I took some shots of their displays.

Get this… The Dismal Swamp Refuge is not only the home for many species,  but parts of it was also surveyed by George Washington’s Company.  The Dismal Swamp is also Nationally known for the “Underground Railroad”.  Cool beans

The swamp is so rich in history.

Well we continued up the swamp by boat.  It was for the most part a nice trip up the swamp.  We hit hard once or twice on the bottom.  Bryce marked the position on the GPS so we could let the Army Corp of Engineers know where the bad spots are. The ladies in the office at the rest area at Dismal Swamp Welcome Center said to please mark the GPS coordinates and let them know if you scrap bottom or roll over a tree branch.. They really want to keep the river open to boaters. The depth is strictly regulated at 6 feet.  Most of the canal is 8-9 feet.  However, a few spots are 6 feet or less.  That seems to be where the bumps are. We draft 5’6” to our quite wide wing keel.  So we hit most everything.

The Virginia State line runs through the Dismal too. 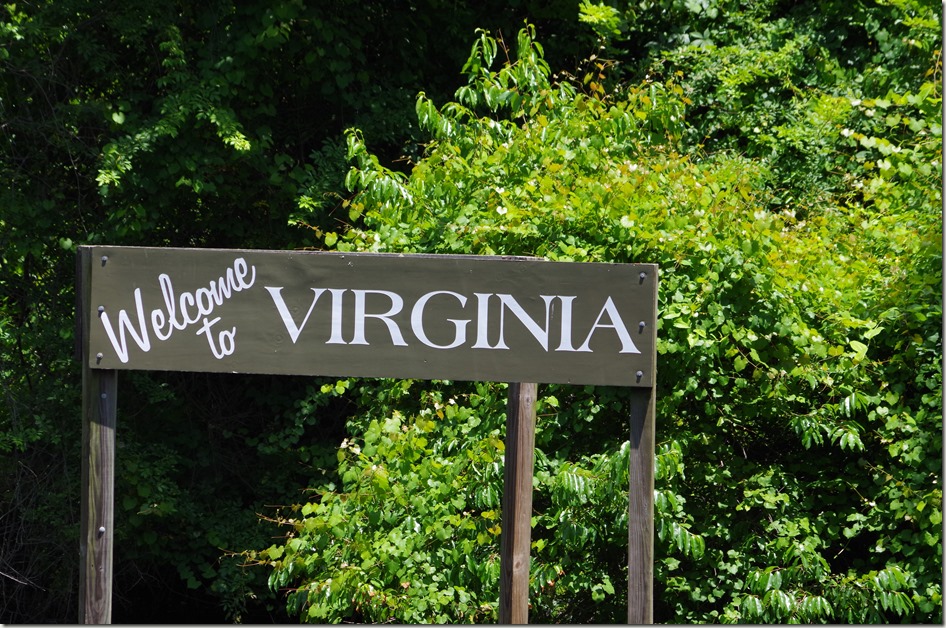 We spent the day in the hot sun; not much of a breeze.  I think sometimes the sun makes me a tad sick if I spend all day in it.  The flower blooms added color to the swamp. Apparently there are thousands of migratory birds in the spring and fall. 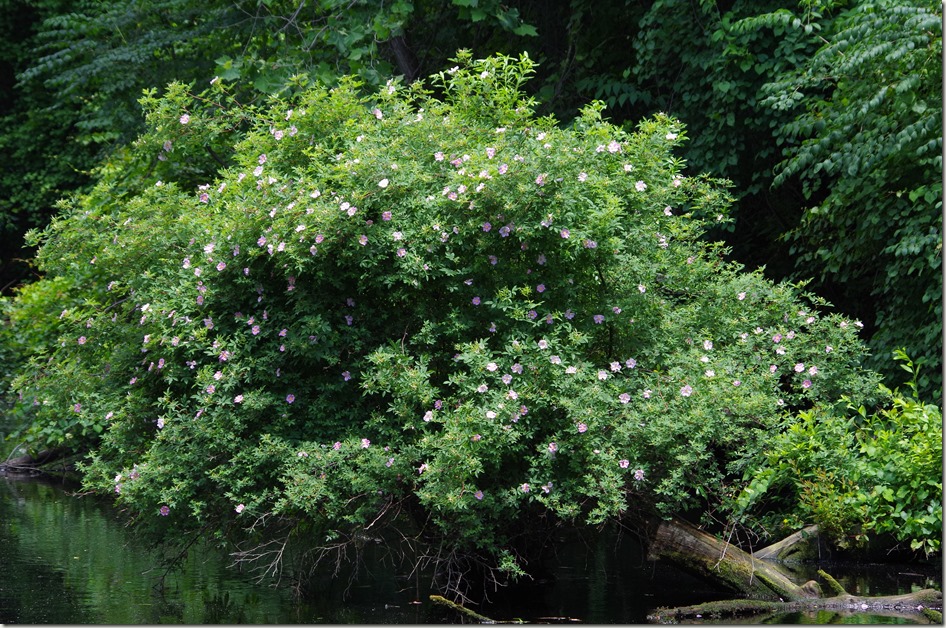 You can see the sides of the swamp are very shallow and full of lily pads. 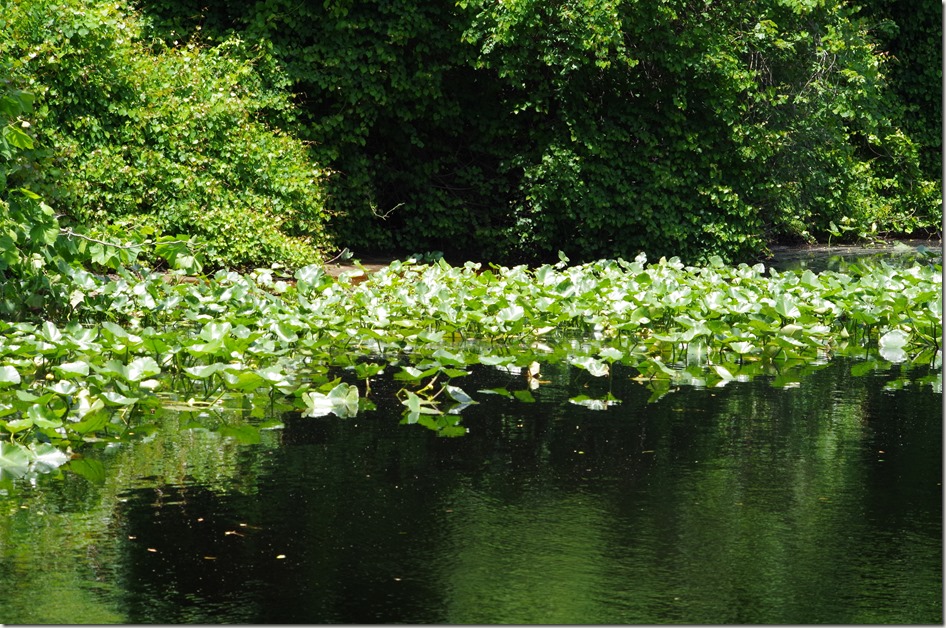 The swamp was very straight at times.  I guess I should say most of the time.   It is said the the trail on shore is linear and flat; perfect for taking a bike ride or a walk. 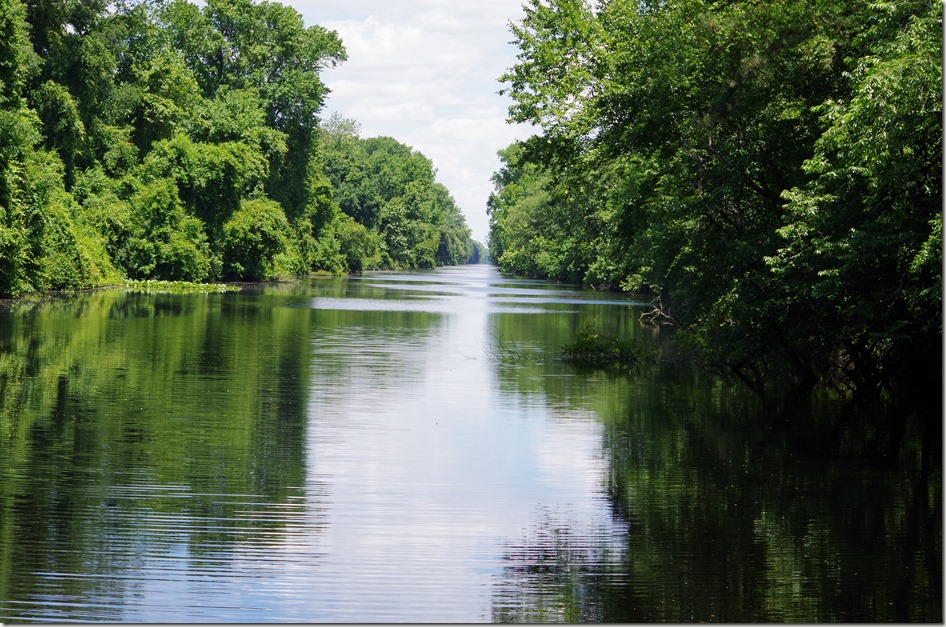 We had another visitor that just would not fly away.. This butterfly must of traveled a mile or so with us.  Any longer and I would have had to charge it for fuel & dockage!! LOL 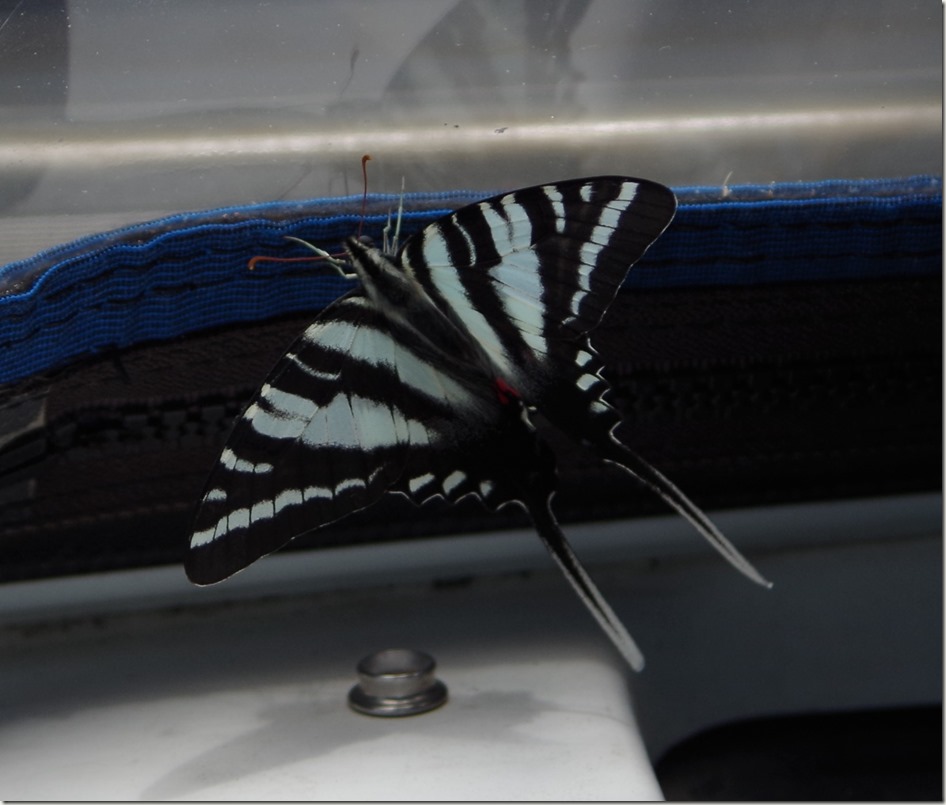 I like this pull through garage. The swap is charming; it just calls for you. It’s slow and the view is kind of sexy and mysterious: if you think about it.

We need to be at the next bridge by 3:30.  That is it last opening for the day.  But we decided to stay at another free doc right next to the locks.  We found out that one of our batteries shorted a cell. So with that said, we need a new battery somewhere up the river.  As we traveled up the swamp, we noticed something in front of us.  Bryce looked through the binoculars. We couldn’t make it out. We saw some colors but it was to far for a clear view. We will let you know what it was as we get closer.

This fly is so big and he packs a hard bite so I sent him to his maker.

After a bit we approached this cute boat. Their shirts are the colors that reflected off the water in the binoculars.   Looks like the three were having fun. Did you notice the tablet in the young man’s hands?  Maybe he doesn’t like fishing, but he seems to be having fun.

We finally saw another sail boater coming at us from the opposite direction.  There was more then enough room for the two of us. 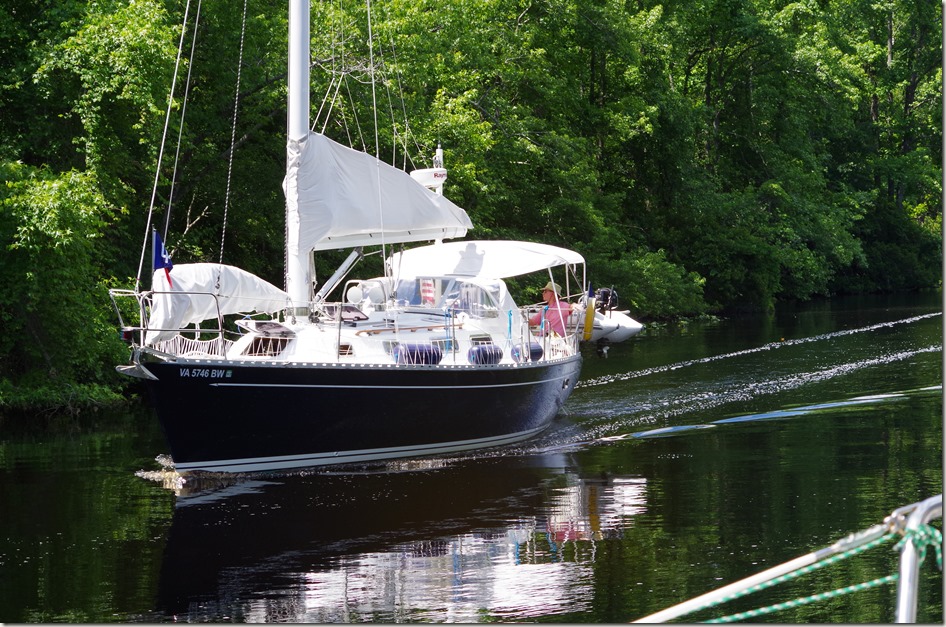 Finally, as we passed through the bridge we told the dock/bridge master that we would not be going through the locks till the following day.  He responded back to us. “Sounds good, coffee will be on at 8:00 a.m.” I stood on the bow and waved to him as we passed by.  Just beyond the bend we tied up to the wall.  The dock was clean and more than deep enough to get into.

To be Continued: Thanks to each and everyone of you for following us.