My heart is pumping fast.. The excitement once again is over whelming. I’m not sure why, but just knowing we are finally heading into the Calument is exciting.   Bryce took the day off and we woke up early wanting to enter the river and head up towards Joliet.  Traveling though the river was quite peaceful. We could hear the sounds of the manufacturing starting up for the day.  As we went under the bridges, I could hear the rumbling of vehicles as they passed over.  What a great day!

Bridge was only 7.3 feet tall. It is a railroad lift bridge. It’s open unless a train is approaching. 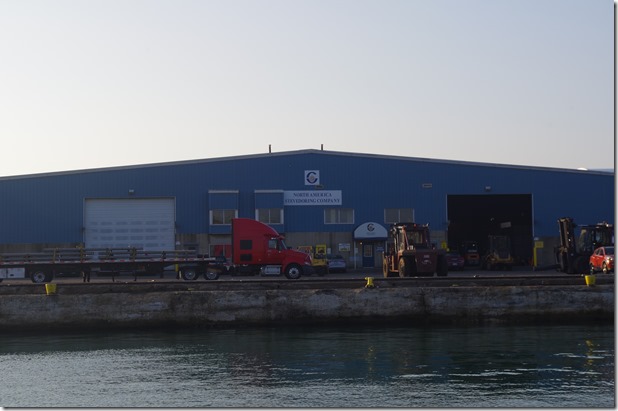 These are a few bridges we had to pass under within a 1/4 mile of  entering the river.

As we passed under one bridges there is another one to take its place..LOL I always wonder if we are low enough to make it under them.. 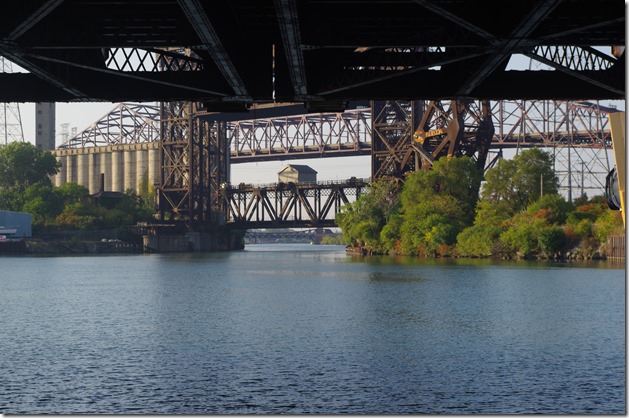 More industry along the river 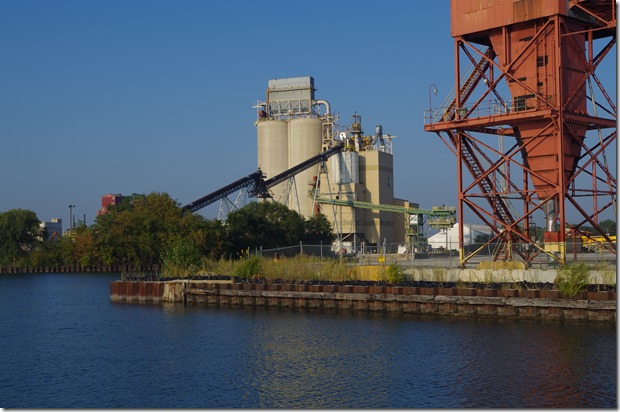 This is Big Metal.  Apparently a scrap metal company.

I would say this is a big pile of coal

We started to see tows and barges again. 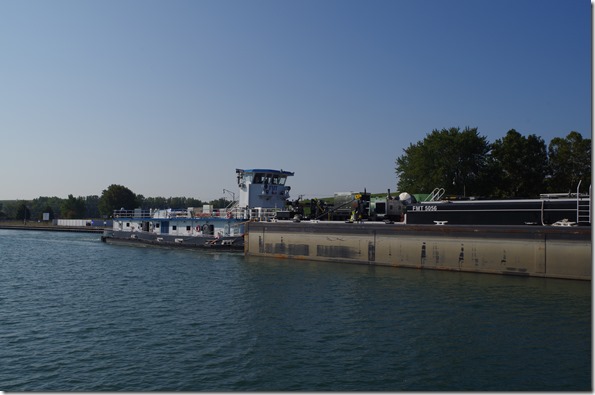 These  guys were out taking water samples of the river. 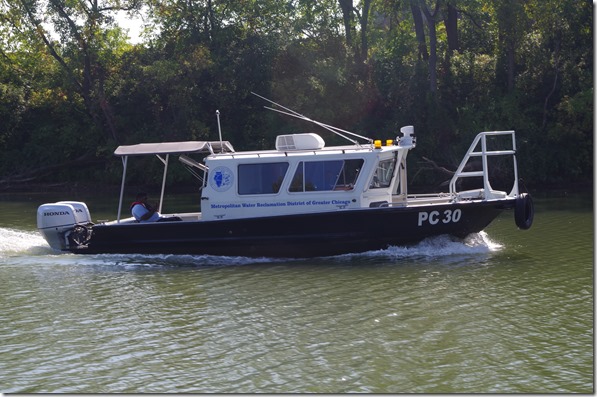 Our first water fall of the trip. 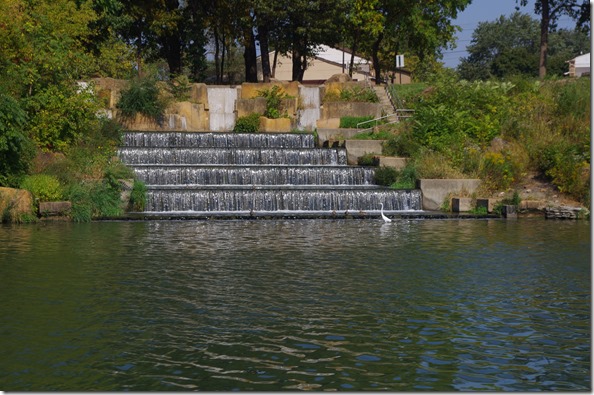 I’m sure that if I went back and looked at our last blog, I would see the same picture. I would think they would have pulled it out..

Look it’s our second waterfall… It just captured our view. 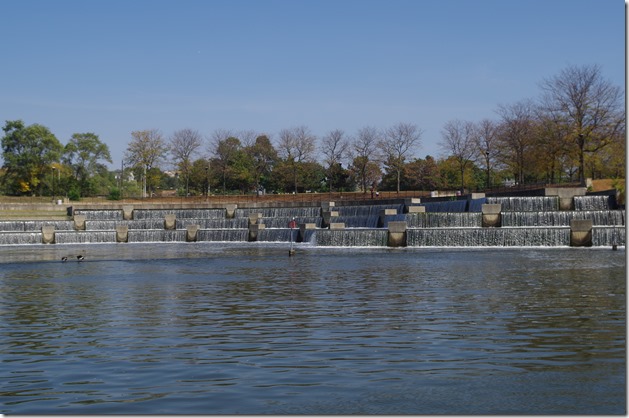 We made it though the first lock.. But Bryce and I was a bit nervous. The lock master had us tie up on the starboard side which is no big deal.  We were sharing the lock with 2 powerboats and a tow with three barges on it. The lock master had us tie up to the last floating bollard.  No problem.. Unfortunately, the doors could not open without us backing up because our overhanging mast interfered with the lock doors. So after the water dropped, we had to disconnect and back up prior to them opening the lock.

We meet another nice couple in Joliet. Don & Lesli on their PDQ 34 name Soulstice.

Okay, so I just broke another toe…

This is early morning in Joliet.  They really cleaned up the free docking area.   Police come through regularly to check on the boats. They added many more outlets for boaters to get power. The water is very clalm in the morning before the tows and pleasure crafts start coming though town. This is the free wall for dockage. 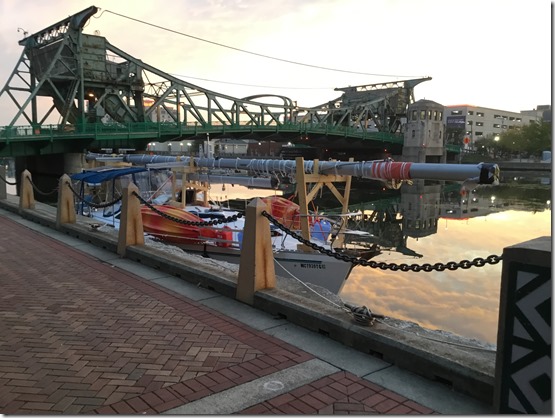 After leaving Joliet, we headed down river to the next lock Brandon Road lock.  We had a three hour wait again while they push tows through. The lock master asked me if we had been waiting long I said yes, 3 hours! He apologized for the wait.

We are once again the only one in the lock. 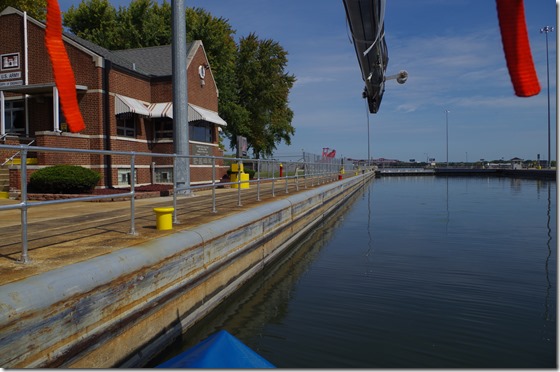 I get a kick out of the little waterfalls they create while they lift us down in the locks. 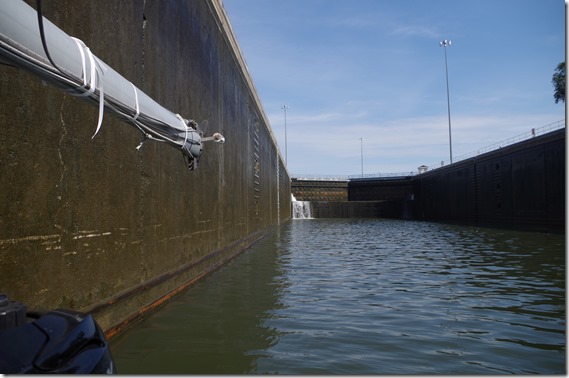 After making it out of the lock, We were pushing time before sunset. We needed to find a place to anchor for the night.

This pontoon Ultralight flew right next to us as we motored down the river. 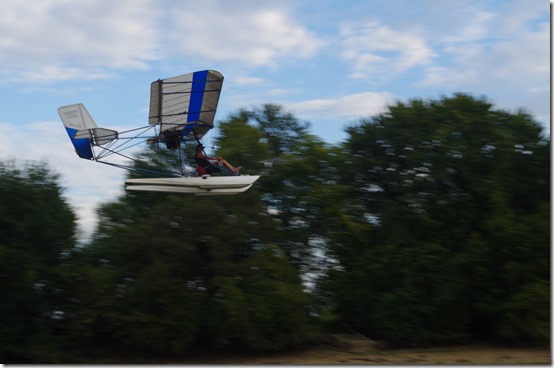 We were just relaxing looking at the scenery when this train blew his horn and it cared the crap out of me! LOL This reminded us of coming up Hudson River.

We had several bridges to cross under. I’m always amaze when we fit under them because they seem so low.

Dusk came to quick after we left the lock, so Bryce checked the computer and noticed  Sugar Island.  We headed there.. according to Active Captain, there should have been plenty of water for us.  Well, as we approached the channel to go in we bumped a tree  with our keel.  At that point we were so tired, we reversed our a bit and we anchored at the opening of the river.  The following morning was great.  The view was awesome. We had 8.5 feet of water under Beauty and the water temp was 81 degrees and air temp will be 93 degrees over the next week or so. 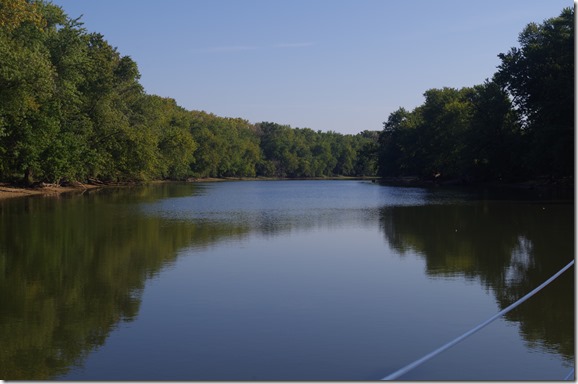 Treasure Island Beach.  Lots of sandy beaches litter the river.  The locals always know where the nice spots are.

We noticed this pontoon was out walking his dogs. 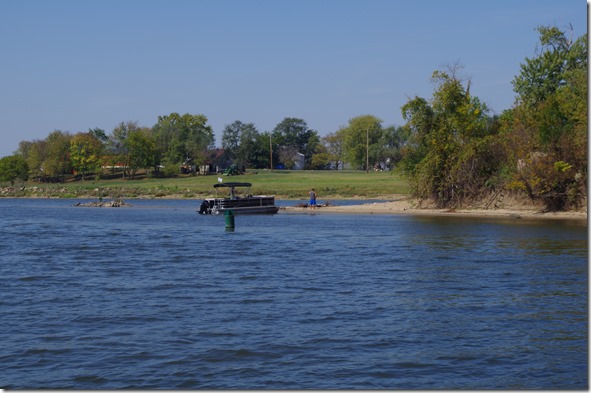 I so wanted to stop and play too…

Bryce called the lock master at the Marseilles Lock.  He said he had a commercial load coming North and one going South so we were to tie up along the LDB cell (Left descending bank cell )  It’s jus a big round cylinder of cement.

Bryce used his winch to tighten up the rear stern line to straighten out the boat.  It is 93 today.  Bryce is in his swim suit and most of our enclosure plastic is down. 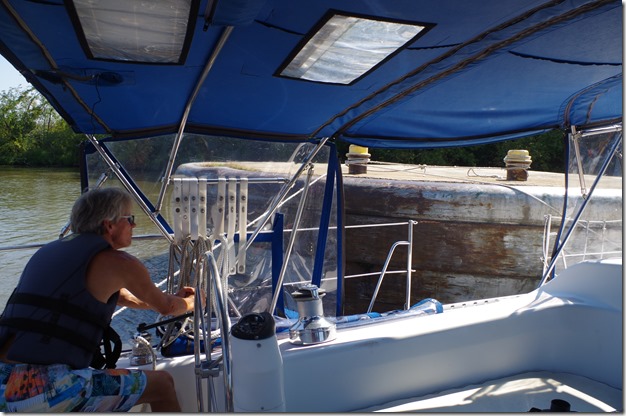 Mike Bird is a South bound tow and barge.

Mike Bird is so big, my camera couldn’t take his whole picture from our angle. 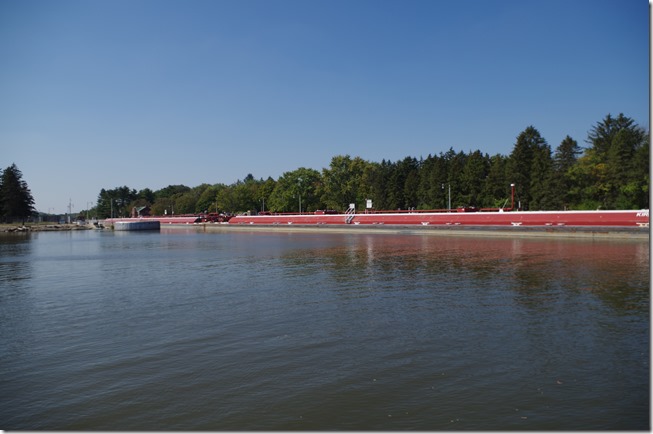 Look… He fit into the lock. The captain had to move the tow to the side of the barge so the doors on the lock could close.  So his barges and tow were over 600 feet long.

Our current position is the lower left most point.  Or go to http://trackmytour.com/35L17 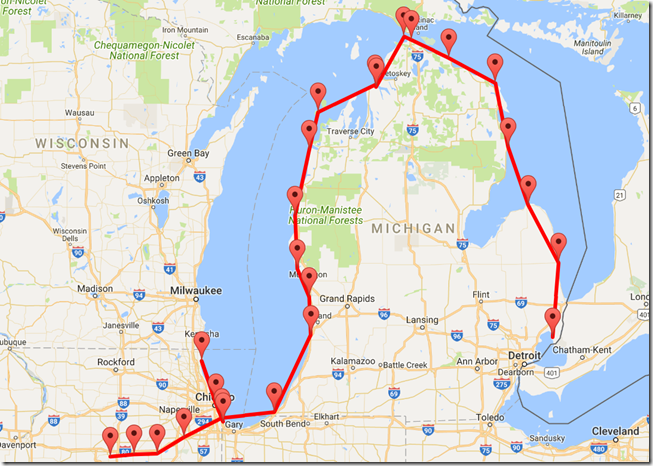 2 thoughts on “Calumet to Joliet”