The best part of our journey is meeting people along our way. Back in Mobile Alabama we met Miranda and Mike. Then we met up in St. Petersburg Fl. They decided to take a slip there and get jobs for the summer. We told them we were headed to the Keys. They have never been here, so when we got close we contacted them and they joined us in Key West.  It was an amazing 5 days with them as we explored around the island and met up with a few other boater friends too.

The funny story is. Bryce put a hole in the dinghy four days ago back in the Everglades; okay, a few weeks ago. LOL The following day we walked up to West Marine in Key West to get a patch kit.  Crap!!!! it takes 24 hours for the glue to dry. I had to call Mike and Miranda and ask them not to arrive till the following morning.  That was very disappointing.  But the good thing is we jet-skied in to join Melanie and Brian for dinner.

Windsor is the pup with Brian and Melanie

That afternoon, Bryce patched the dingy.  The next morning, Bryce went in to pick up Miranda and Mike.  After a long wait, I heard a noise up in the cockpit; it was Miranda climbing aboard Beauty.   How exciting it was to welcome them aboard. Miranda had said they were very hungry when she called.  She added they had made it to the dinghy dock.  So I put together some lunch while Bryce went in to pick them up. The dinghy held well with its new patch.

Crap!!! Bryce put another hole in the dinghy…. LOL; good thing we had more patches and glue.  The glue takes 24 hours to dry. So we were stranded on Beauty with no way off.  But the four of us wanted to go in to Key West. Then Miranda remembered she picked up a card for a water taxi. So we called the water taxi.  It was like no other we have ever seen.  It was a pontoon boat.  Talk about highway robbery. This is water robbery… 10 dollars a head; 40 dollars to get to shore.  Now this is for a one way trip. After we arrived in town we met up Melanie and Brian along with Steve and Janine. The eight of us met for drinks and dinner at the brewery. Not wanting to pay for another taxi our dear friends Melanie and Brian gave Bryce and I a ride back on their dinghy. 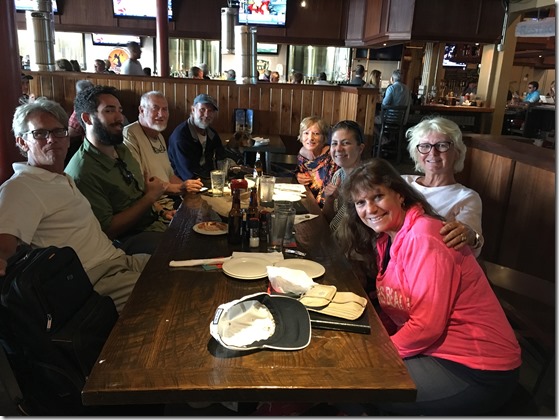 So Bryan brought Bryce and I back to the boat after dinner.  The sun was setting and Bryce now needed to go pick up Miranda and Mike from the dock as there was not enough room in Bryan’s dingy to take the 6 of us.  Bryce left in the dingy.  On the way back to the boat after picking up Miranda and Mike, the dingy motor ran out of gas.  So half way across the mooring field and well after dark, Mike started rowing the three of them back to Beauty.  Miranda and Bryce harassed Mike incessantly about his drunken sailor zig-zag path as they slowed crawled across the mooring field.  I could hear them laughing in the dark as they approached the boat.. Too much fun!!

Well the following day we wanted to head up towards Marathon Florida. We talked Mike and Miranda in to going with us. We let go of the mooring ball and headed back down and then back up the channel past Key West.

Mike, Miranda and Bryce posed for a photo as we headed out of the harbor.

This is one of the glass bottom boats you can take out. Wonder what it’s like if you see a shark up close a personal.

This is one of the Disney ships that arrived into Port Key West.

We enjoyed the Sunshine as we sailed north east in the Gulf of Mexico toward our next anchorage near Johnston Key. 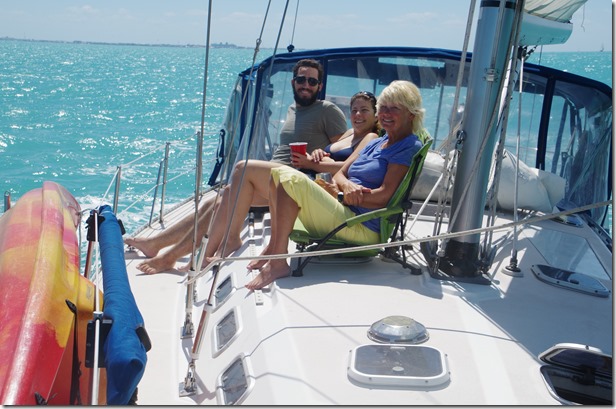 We sailed to Johnston Bay and stayed the night there. This was such a pretty area. This panoramic photo was taken by Miranda. What a great shot.

As morning approached the fisherman were out.

After relaxing a bit, we made our sail towards Marathon. The winds were perfect again. This day we were able to put the pool up it was awesome!!!  Detailed in the next blog..

You can see our current position and more pictures at https://trackmytour.com/35L17

Thanks for reading our blog!