Leaving Turner Marina, we were so excited to see Beauty Spread her sails into the winds. Of course by the time we made it out into the bay, the winds were light and coming from the wrong direction. But we had fun. We saw our first dauphins on this trip. I didn’t have time to grab my camera. We decided to anchor near Dauphins Island in the Mississippi Sound and then Sunday sail the gulf to Pensacola Florida. Silly cat; George decided to play in the misty rain after we anchored for the night.

It is a tad bit scary when the mast is up and going under bridges even when 5 feet taller the you.  I was holding my breath. 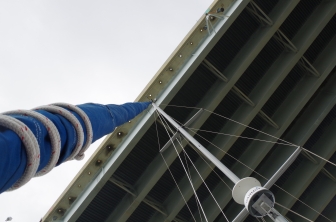 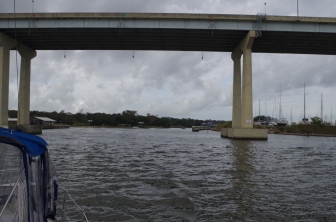 I am not sure why but but when I am out in the open waters I just get this odd feeling. I am not sure if I can explain it. But It is so peaceful and I feel like I am in another world away from the hustle and bustle of life. Some people like a cabin in the woods and I like a boat on the water. The fisherman work hard trawling these rivers, lakes and ocean for food; so I can go to Red Lobster. 🍤 You can hardly see that they are pulling a net. 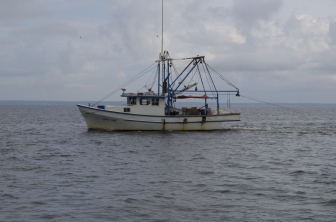 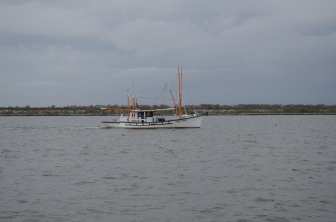 Look at this house in the middle of mobile bay.. crazy….but cool at the same time.. 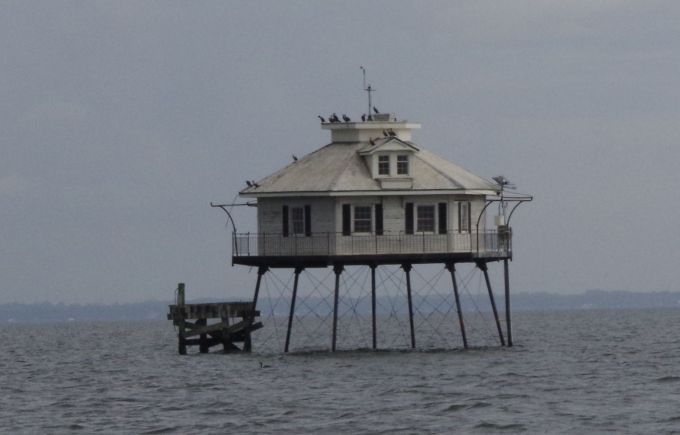 I went downstairs for a few and when I came up Bryce had set the head sail. I was so happy, over 1000 miles with a stinky motor. I was so looking forward to seeing her sails up and the winds blowing her like an angel with her wings spread.

Passing in front of us a freighter carrying containers that are as big as a semi-truck. Wonder what’s in them? 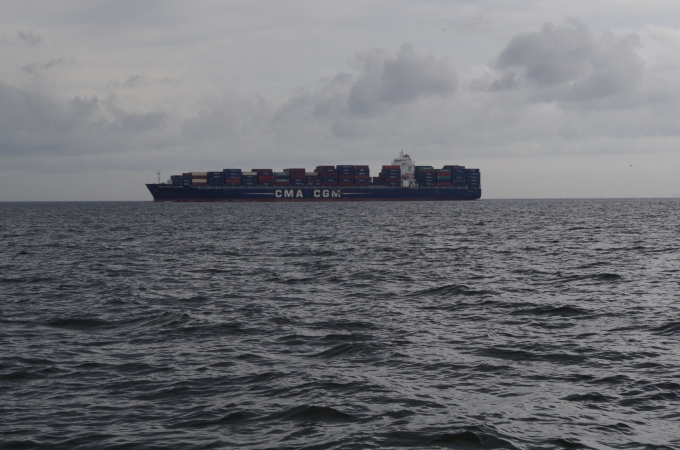 Night has fallen and the anchor is out 🌕

The sun had set and the night had become dark with the cast of the moonlight over the bay. The winds began to howl like a pack of wolfs screaming in the night. Beauty tossed and turned in the waves throughout night and into the next day. We couldn’t sleep. We tried to let each other sleep for a few hours but we just could’t sleep. This was our first time anchored in salt water and just a hop skip and jump to the ocean.

Bryce threw out the new anchor. It let lose within a few hours.  Not enough line out. I got upset there was no back up plans except that we were sailing the gulf in the morning. Bryce was able to reset the anchor by letting out more line. Winds gusted up to 35 knots according to our wind speed indicator. It was gong to be a long night. The question is; will this anchor hold????? The winds pounded us strong. I had a lot of what if’s….I needed to clear my mind and throw out the what ifs..

I put my faith into gods hands for our safety.🙏🏽 We had to keep our eyes on the GPS screen to make sure the anchor didn’t drag. I miss Bruce⚓️ it held us tight and didn’t let us down. But I must remember that Bruce never had to hold us in winds like we are seeing here. I stayed in the cockpit most of the night watching that screen on the GPS to make sure the anchor didn’t drag. Believe me it wasn’t a good movie.

It was a long night. We looked at our wind apps, weather guide and radar. We decided to head back up to the ( ICW) Inter Costal Waterway it was going to be our safest  but a miserable few hours going back up across Mobile bay with the 30 some knots we were seeing. The winds are going to come out of the East most of the next week, so it’s not the best time to be out on the ocean for us.

Morning came; Sunshine & 28 knots breeze from the North. The Danforth held us through the worst.  Bryce headed up on deck to pull up the anchor. I drove while he came back and yelled at me for not holding the boat into the wind. I stuck my tongue out behind his back of course. LOL.. The winds were kicking my butt at the helm. I gave it a bit of power and that helped. I know you cannot tell but we had between 3-4 footers in addition to 25 knot winds while pulling in the anchor. 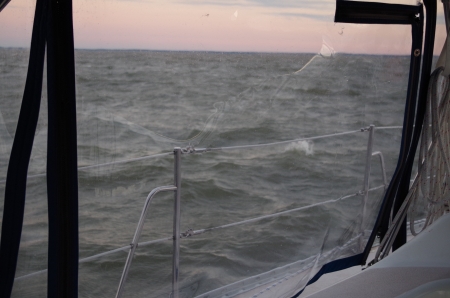 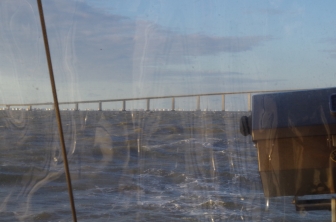 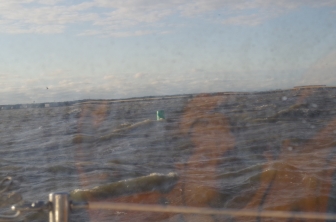 Yes, even with the horrible weather I still enjoy the boating. But I would rather be in a safe place during wind storms & bad weather. The waves pounded us on the port-side beam going back across mobile bay to the ICW. We were blessed with sunshine. That really does help. Neither one of us was worried; just cold and damp. The waves broke on the side of the boat and came pouring in through the small openings in the enclosure. Bryce’s feet were cold. I left his foul weather boots at home; but remembered mine…Sorry honey.   The waves were similar to Lake Erie in a 30 knot wind.  About 10 feet and breaking.  Small craft warnings on Mobile Bay and the Gulf.  As usual, we were the only ones out. 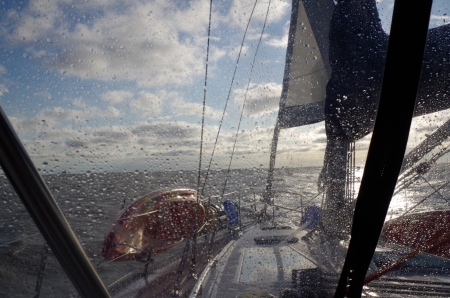 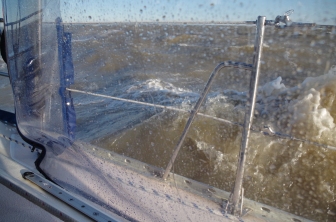 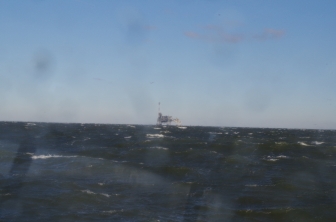 Even the inside of Beauty took a beaten.  I guess I got out of practice battening things down. 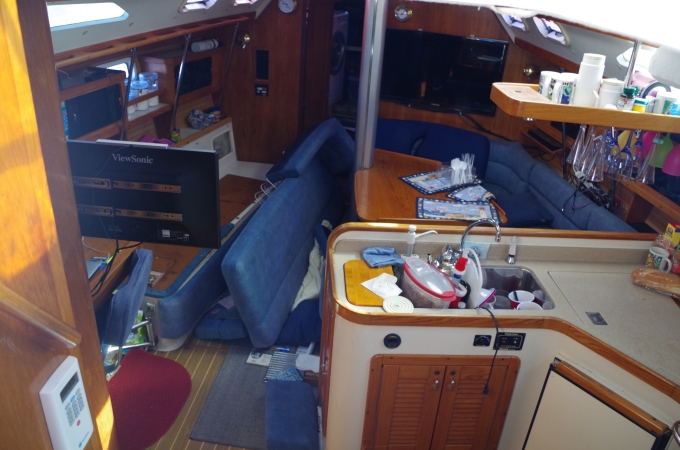 Look it’s the gap between the houses and the trees. The entrance was a favorite place for the birds to hang-out The waves settles down dramatically when we were protected by two points of land. 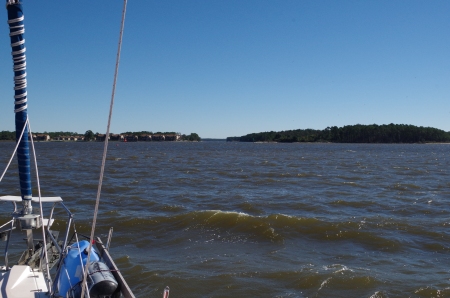 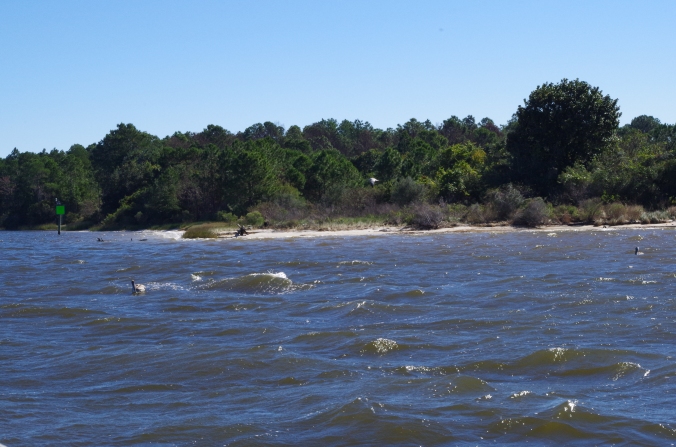 I love this sign it says Sailboat bay but the majority of boats are power boats. LOL Can you tell we made the right decision by coming back up to the ICW? It’s still a bit windy (10 knots) but very much protected by land. 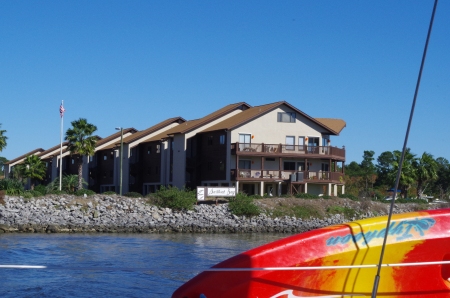 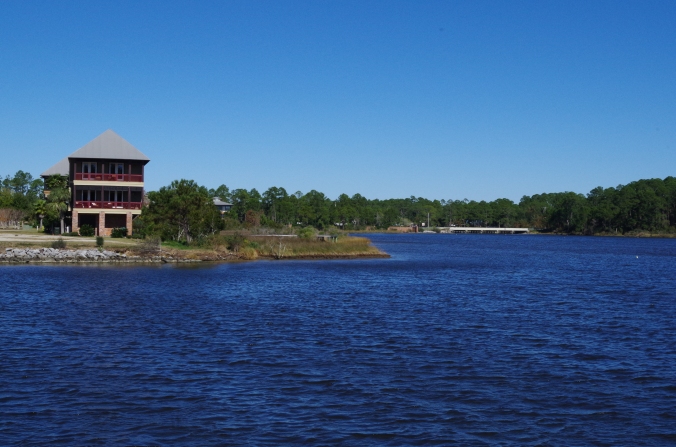 See the bridge it says 73.5 feet tall. You’re going to laugh at this. I stood on the bow my heart sank to my toes… I screamed Bryce we are going to hit the bridge. He put her in reverse to stop her came out and looked. Jane the bridge 73.5 feet tall we only need 60 feet we are not going to hit! It was an optical illusion. Well better safe then not.  LOL.. The view was awesome with all the different scenery 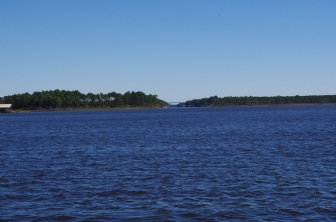 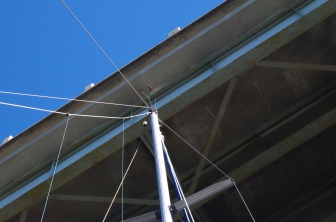 Does this person know what a No Wake means? He did slow down for us but not for the homes on the water front. 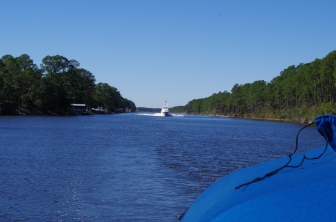 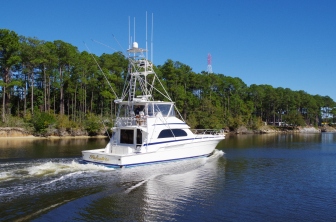 Where are we going to have dinner? The Acme is an Oyster place. 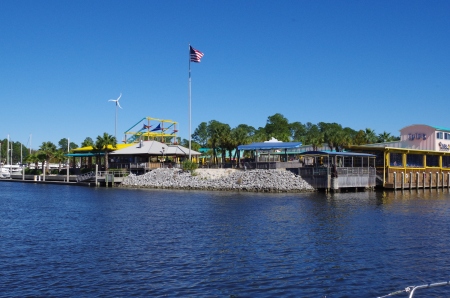 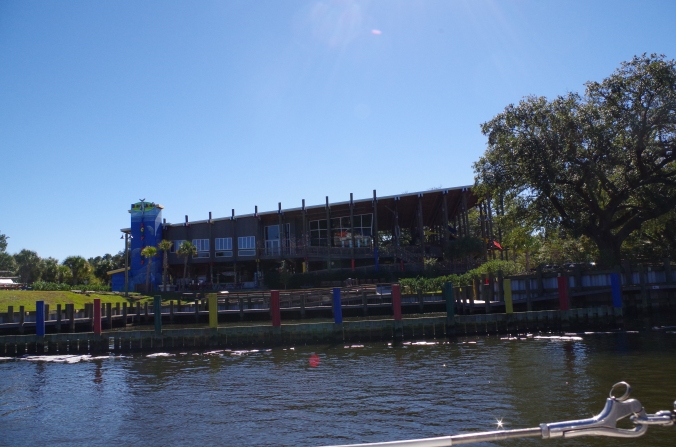 The views here are spectacular 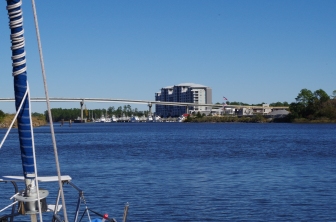 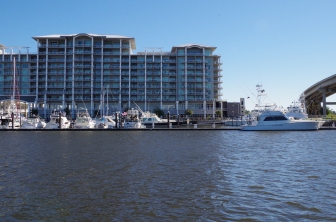 Our second sightings of dauphins 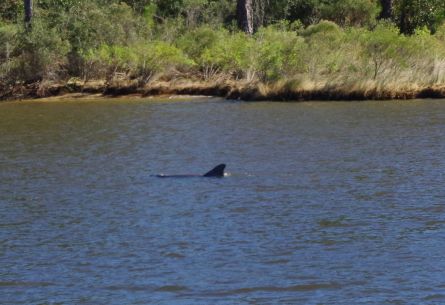 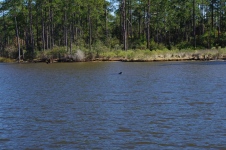 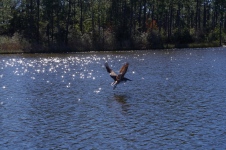 Well, we anchored at Orange Beach. Not sure if it is orange or not but will keep you posted. To be continued .