Yes, we made the transition from the Gulf of Mexico to the Atlantic Ocean. We anchored two nights off Fanny Key thinking that we would be protected from the ESE winds at 20 knots. It was a cute area with lots and lots of boat traffic but with the waves from the wind we didn’t even noticed their wakes. I received a text from some of our BEST friends in Michigan that said: “We have left for Florida. Where are you?” Awesome we are getting company….  We had two rough nights anchored at Fanny Key. We drove the jet-ski over to the Atlantic side to Boot Harbor City docks and put our name on a list for an anchorage ball in hope that we could get one before our guest arrived. They said we were the 10th person on the list and no one is moving due to the small craft warnings. We had lunch at Burdines. great food. Who ever thought that shrimp and sauerkraut Rubin sandwich would be so delicious…

On the third night we drove the boat over to Boot Key Island and anchored in the Straits of Florida at this point we are officially in the Atlantic Ocean. The winds changed from a ESE to a slight SE 15-20 knots and back to ESE with small craft warnings.  Waves were building where we anchored. George’s eyes didn’t look so happy.  Needed to find a smoother anchorage.

These photos show us leaving the Gulf and entering the Atlantic.

We have some dear friends Dirk and Silvia who have spent 4 years traveling around the world.  We were exchanging text info on where they went and their route.  We need to carefully look at this prior to our crossing of the Gulf Stream.

Bryce stayed up late looking at Active Captain suggestions for anchorages by other boaters and found us a calm river for protection: Sister Creek. What a great place…

We anchored and had to go pick up our arriving guest. Yuan, Jie and Helen.  I stayed behind while Bryce went into the Boot Harbor City dinghy doc and picked them up. After their arrival we found out they would only be with us for that day, the night and the next day. They only came down to see us and had to head back to Michigan.  We have spent a number of Christmas and New Years holidays snowmobiling out west.. So it seemed appropriate to see them now.

What a great visit! But we wish they could have stayed a bit longer.  Yuan and Helen kayaked out to the beach.

Jie and I sipped drinks and enjoyed the pool.

Good-bye our friends till we meet again. 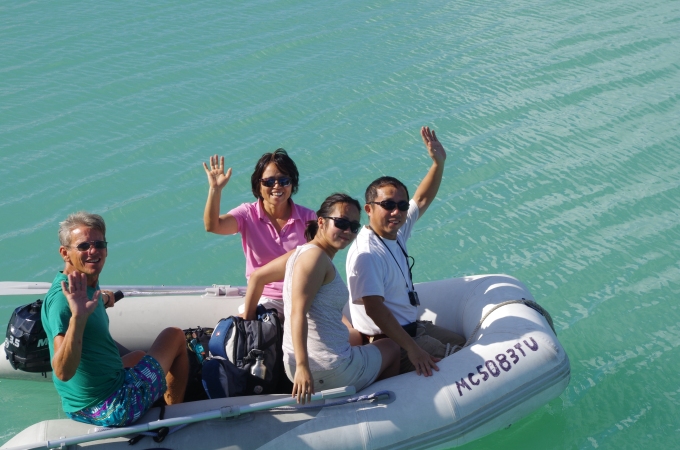 That was a long trip for 24 hours; but, we really enjoyed them stopping by.

While Bryce went into the marina he also paid for us to use the dinghy dock. Along with that you get a key for the showers, trash drop-off and serval other accommodations.

Every Wednesday a boat comes along the side of us and gives us a pump-out.  Every morning at 9 a.m on channel 68 on the VHF Boot Key City Harbor Host a What’s happening for boaters. It is very informational.  Today was our day for a pump-out. Thank you Toby.. 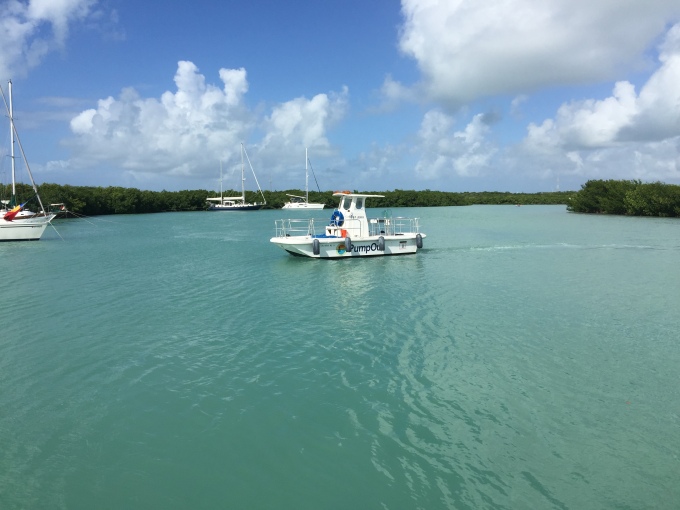 We are anchored just outside a very high power government broadcast facility.  It is causing havoc with the boat electrical system.  The touch screen on our Garmin GPS does not work.  The LED lights on the inside of the boat flicker according to the broadcast modulation.  And our current indicator to our battery fluctuates about 10 amps.  It took me a while to realize what was going on.

4 thoughts on “Marathon: Gulf of Mexico to Atlantic”