I woke up wanting to have coffee with the couple that helped us out with the anchor issue but they were gone. (last blog) LOL.. Bryce said it was time to take a break and get a slip in Saint Augustine for a few days.  I called the Saint Augustine marina; they said they had a slip for us. (I am happy). We love traveling the ICW; but after all the issues, it was time to get off the boat.  After settling down into the slip with air conditioning, I showered  and made breakfast.  I was trying to to figure out where in the world did Bryce disappear to.   I ate breakfast by myself. Hum.. where is he?

I finally found him on another boat next to us visiting with others. So I went and joined in on the conversation.  Mike & Candy they own the 43 foot Wellcraft aft cabin in the picture below behind Beauty. They are from Australia.

Beauty is resting in a slip next to Candy & Mike’s boat. They haven’t named her yet.

We really enjoyed talking with our new friends and decided to have them over for drinks later that night.  Bryce and I went back to our boat and he finished getting his shower and then we are off to explore.  We went up to check out the red train tour bus.  But the day was already gone, so that is something we will do tomorrow.

We crossed the street and went in to a local pub for a beer and dinner.  There was a 15/20 minute wait to sit outside. That was ok, I wanted air conditioning.  Bryce took a photo of me (of course) then looking out the window he saw the red train coming up to the stoplight.

He went out to take a few photos. I was sitting there enjoying my beer when he tapped on the window and asked me to come out he had something to show me.  Okay… I dragged my self out there.  Bryce pointed  to a table and there sat Steve & Judy.  They have become part of our boating family.  We met them first on the Mississippi a few times. LOL.. Then Marathon, Florida Keys. Now here, two months later in St Augustine.  We joined them at their table.

Judy & Steve and me can’t wait to see them in October at the Annapolis MD sail boat show.

Steve you said it best so I will let you decribe the six degree of seprartion: LOL

Steve said: “Maybe you should write about the ‘six degrees of separation’….. Except, for cruisers, it’s two degrees of separation.
We met you on the Tenn-tom. We met Australians Mike and Candy on the Callossahatchee river. You met them at St Augustine. You ran into us at St Augustine and told us about Mike and Candy who we’d already met….but you didn’t know that.
Never mind!!….I just confused me…and I was there:-). “

Well as you can tell we all met up on Beauty we had a marvelous evening with everyone.

Candy, Mike Bryce & Judy and Steve. I am behind the camera… LOL 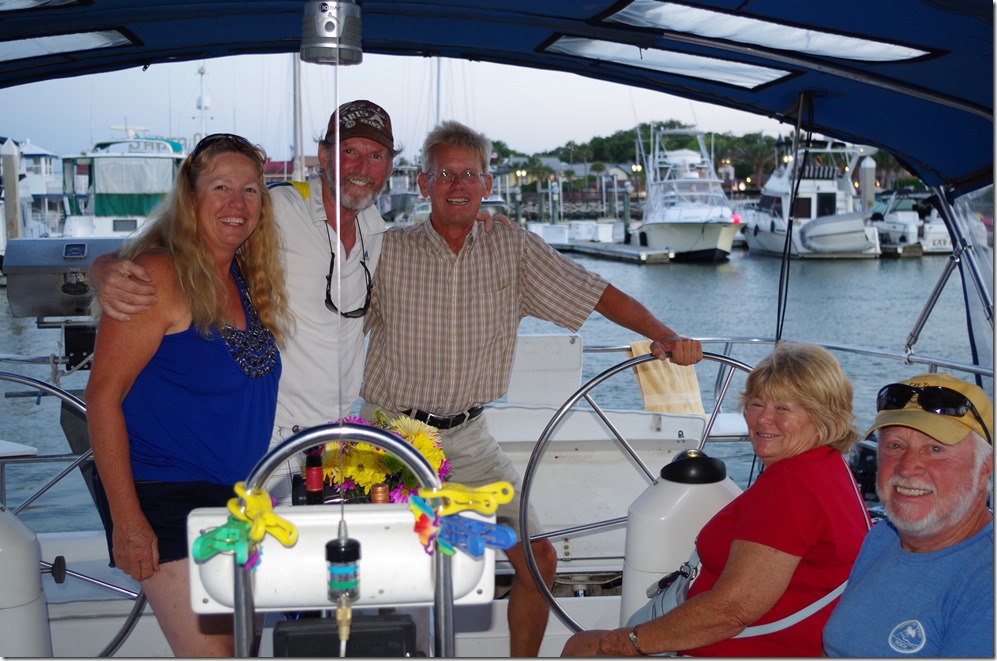 Bryce took Steve and Judy back to their boat. The water taxi had stopped running at 6:00 p.m.  LOL.. We enjoyed the rest of the night visiting with Candy and Mike. Mike and Candy were hungry so we headed up to a place were they could eat.  Till we meet again our friends.

On our second day there we had a lot to do.  Bryce finished up with work then off we went.  It was red train time.  We took a tour of the city. 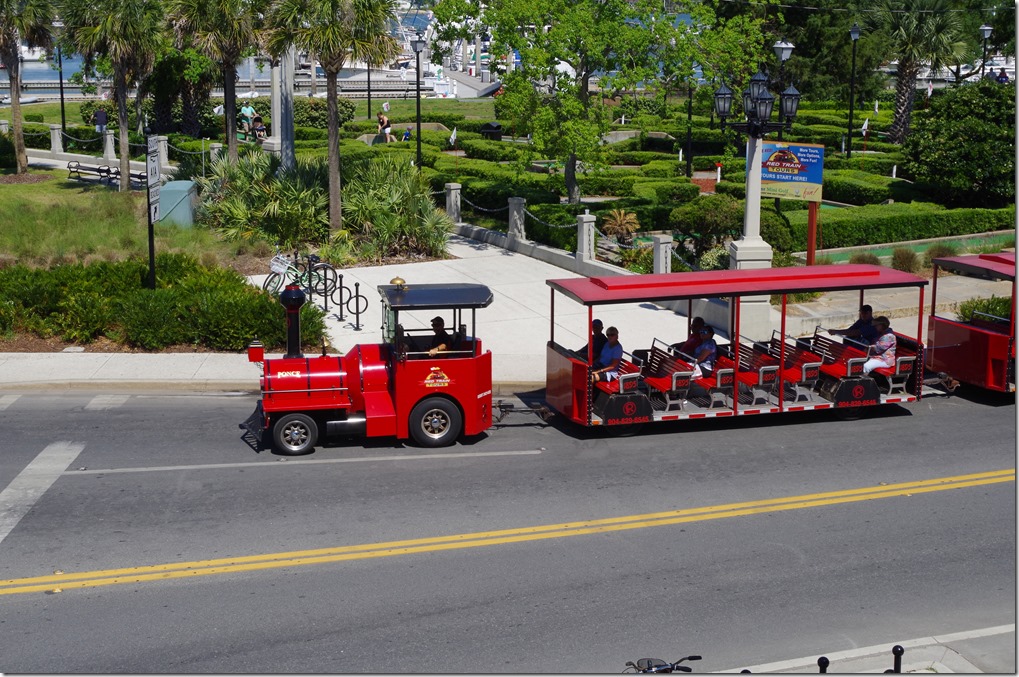 Here is Bryce at Fort Marion. 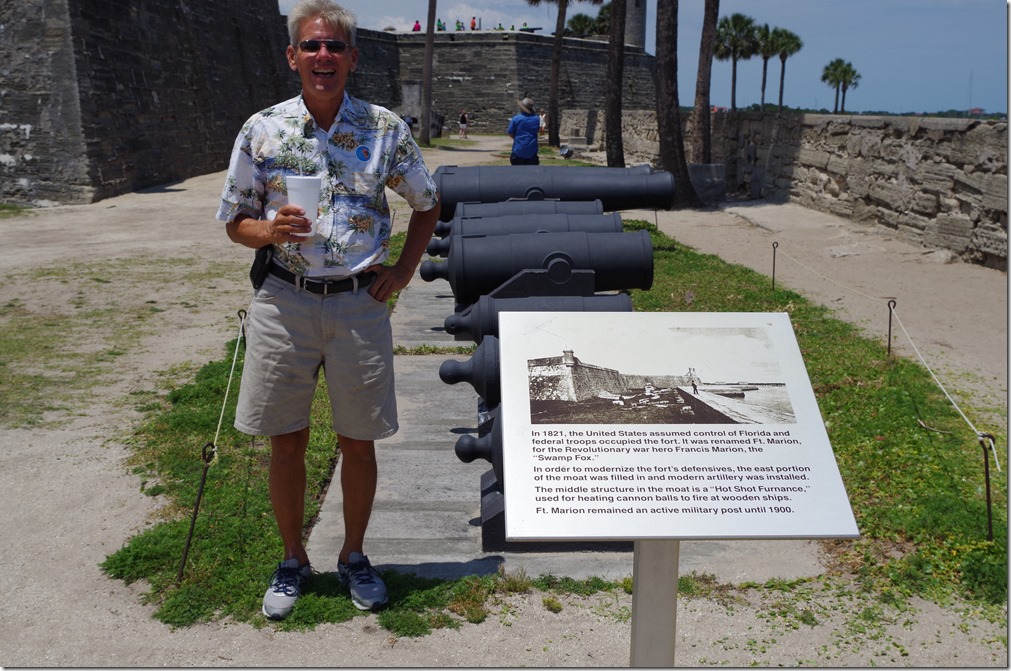 What a great day exploring from the most photograph street to the Fountain of youth .

The Fountain of youth .  Yep.. I look younger. LOL

There were Peacocks walking about.

This church has the most interesting story behind it. This  Presbyterian Church was built in 1889 by Henry Morrison Flagler in honor of his beloved daughter Jennie Louise Benedict.  She died due to complications giving birth to her daughter.

Bryce doesn’t like the dress I have on.  I went in to see what the $20.00 and under store had.  Everything I looked at that I liked didn’t have my sizes. Go figure.

This was the original (and only) entry to the city way back when.  And the walls to the city were considerably higher; 20 feet if I remember correctly.

We picked up a few more items at the grocery store.  Things hanging all over the bikes!!

What a great night. We walked George street and had pizza with Mike and Candy.

The following day we woke up early and headed North on the ICW. Thanks for following us.