After we left Catskills, we decided to head up towards Albany. What beautiful scenery we had.  This route is just lovely. I enjoyed sitting on the bow taking photos. The Hudson river is so picturesque. We had a few spells with the power boats going by and plowing past us giving us a bad wake.  But for the most part other boaters slowed down.

The hills of New York are awesome.  Sure does look like a lot of yard mowing. 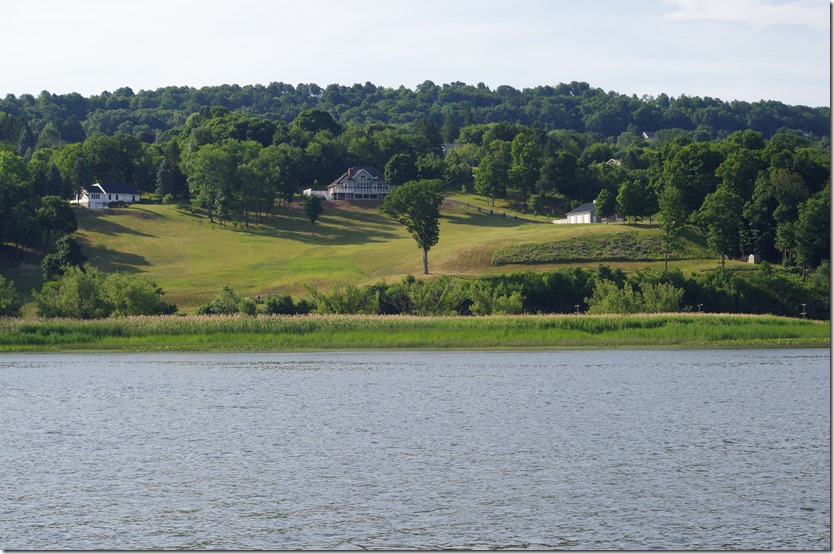 This was a pretty lighthouse we passed. I wonder if some one lives here. I see a dock & picnic table. 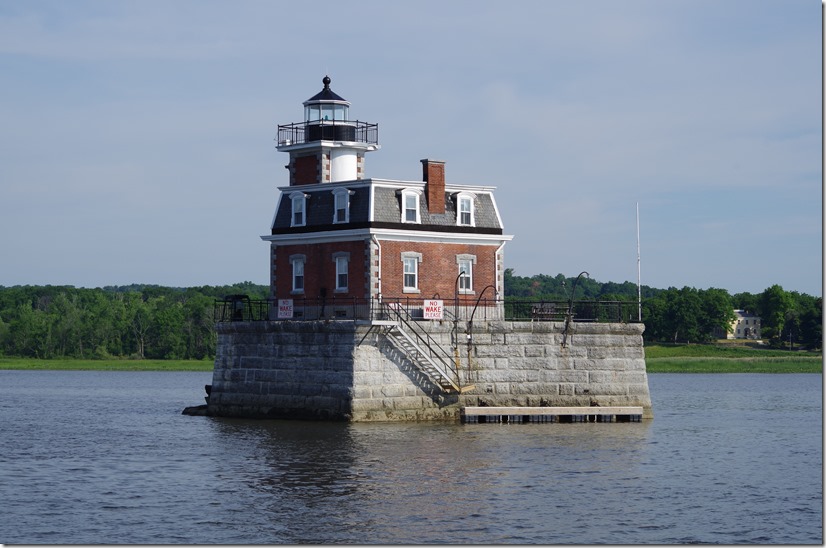 This barge is getting loaded up; then a tow will move it to its new location. 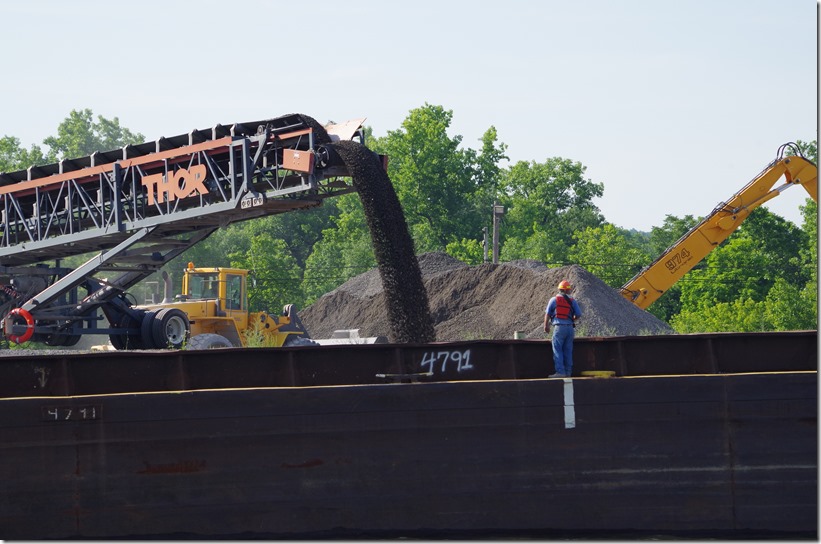 I just had to zoom in. I thought that they might have a green house on top of this.  There sure was; but not the type I was thinking of. 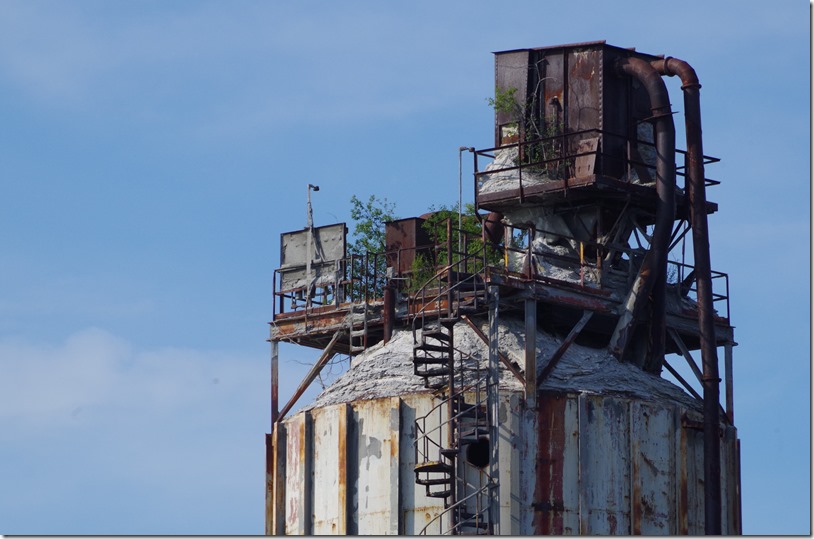 People should remember they are responsible for there wake.  Some people always have a camera in hand so they know who causes the damage. Thank goodness nothing happened to our mast.  We also are power boaters; so I understand the need for speed.  But I always try to watch our wake. Enough complaining… 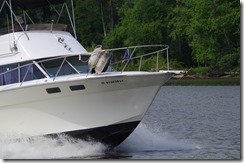 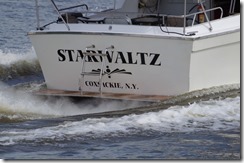 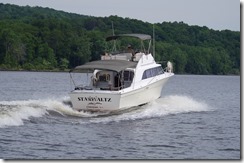 We had to stop briefly to let this tow turn his barge around in the river. Then we saw another one behind him. Sure is a busy river at times. 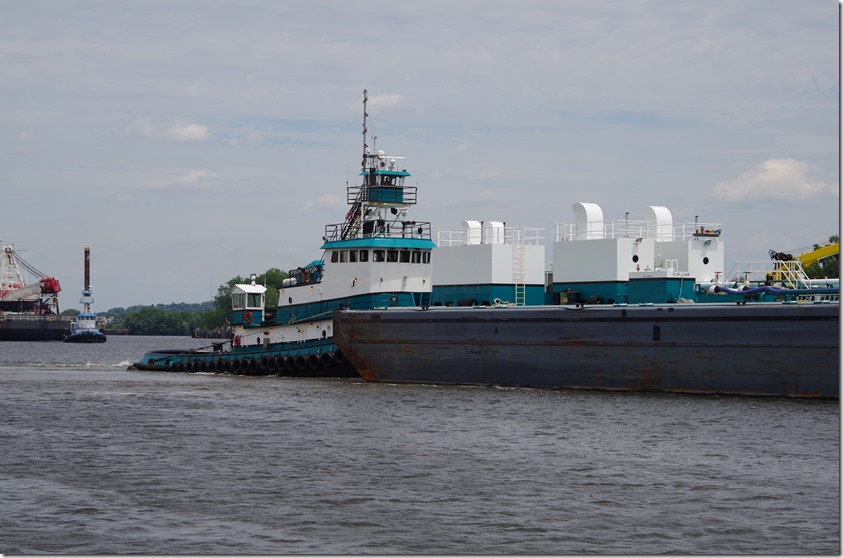 This crane was so big that they had a tug pulling it and a tug pushing it. 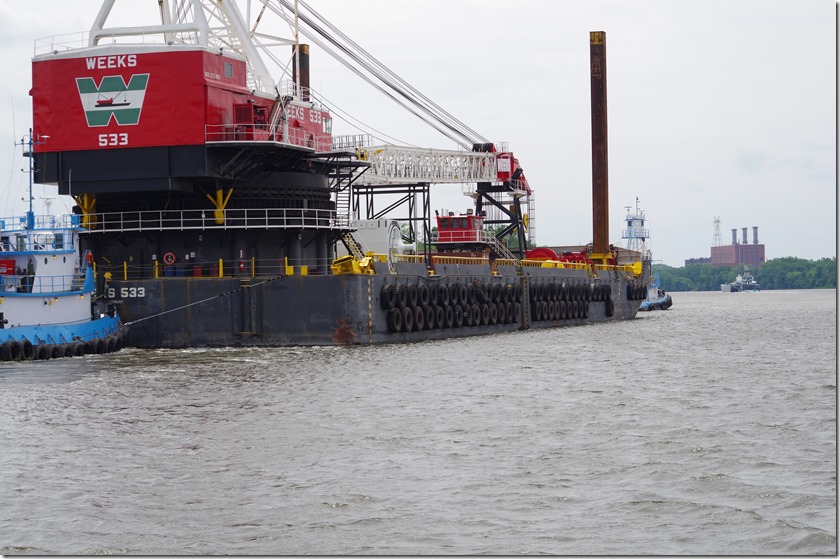 This crane can lift some heavy loads.  We think he is going down stream to help with a big bridge that is being built across the Hudson. 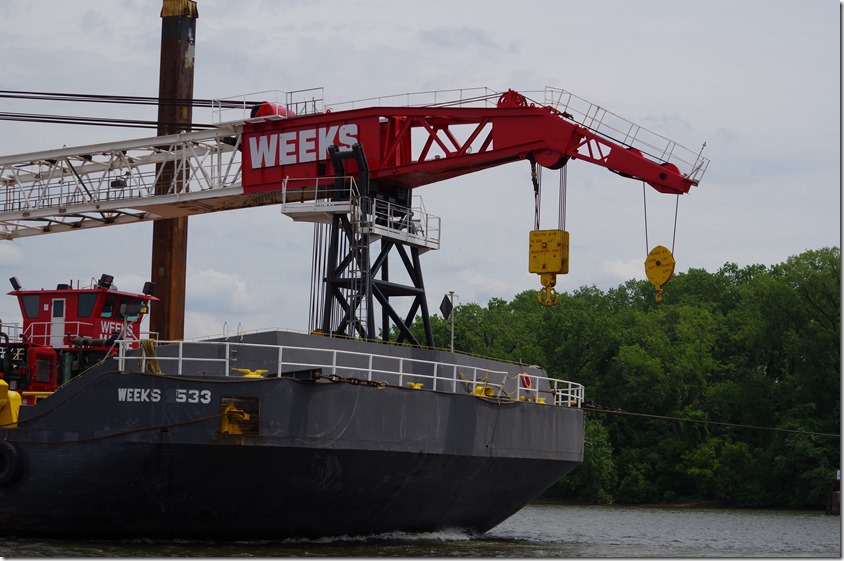 Here is a picture of a park in the city of Albany as we cruised by. 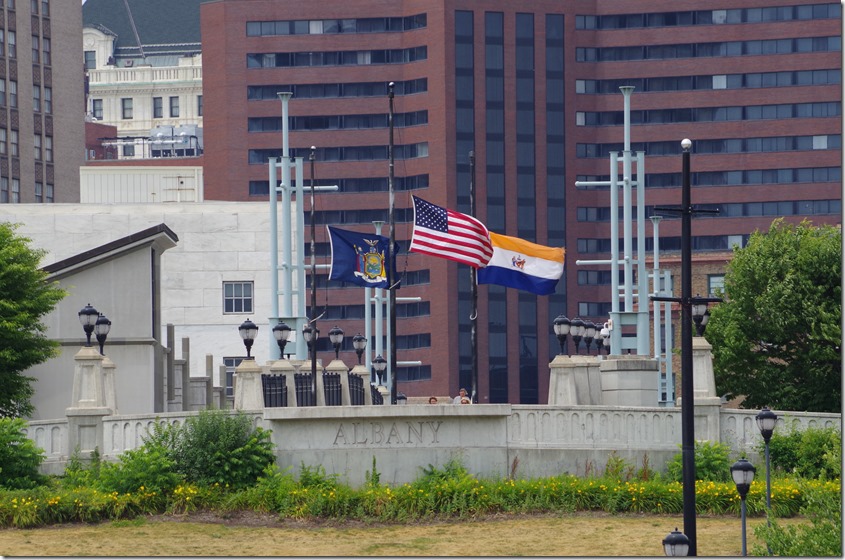 Another picture of Albany. 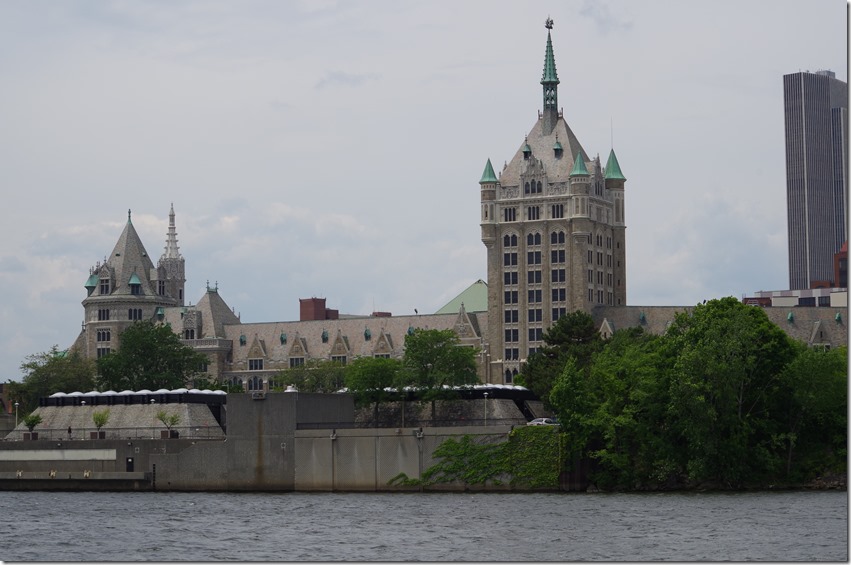 See the front of the mast making it under the railroad track bridge. 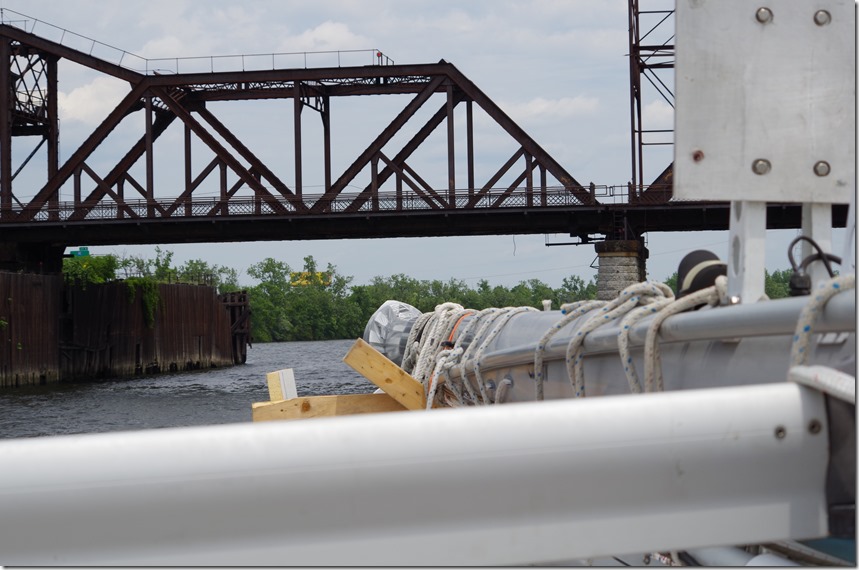 We found an anchorage just north of Albany. I wonder if these Canadian Geese have to have a passport too. LOL 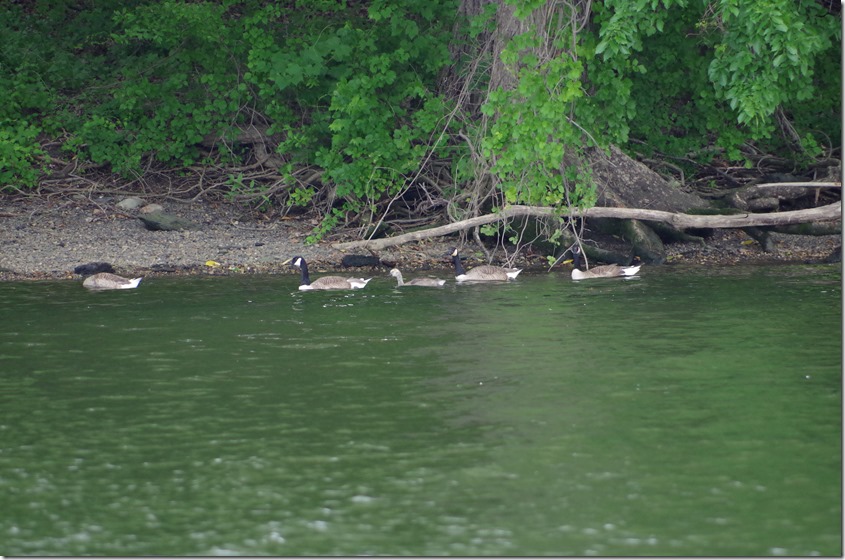 We had a bumpy night with storms passing through. We had tornado warnings . My weather alert on my phone went off all night long. Bryce and I stood on the bow for a while looking at the dark clouds roll in. But it ended up we just had wind & thunderstorms. Thank goodness.   The following afternoon we headed up to Scotia.

Here is a picture of a boat we took as we  passed through Troy. It was a pretty city from the water. 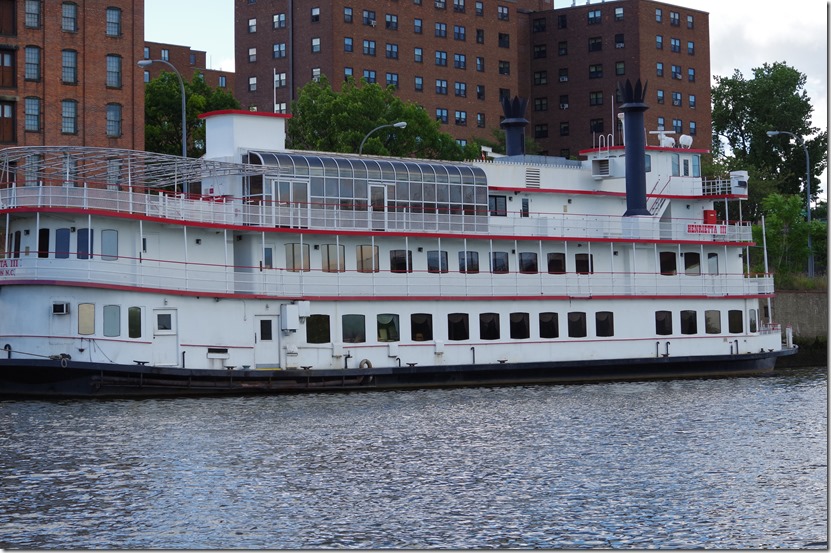 The light just was not right for this photo but I took it anyways. The statue of Helen of Troy was pretty. 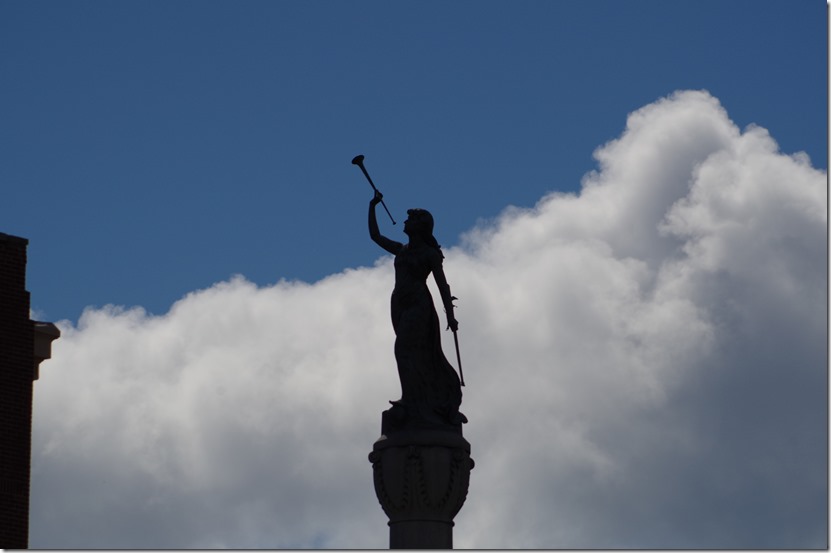 This is a picture of an interesting bridge in Troy. 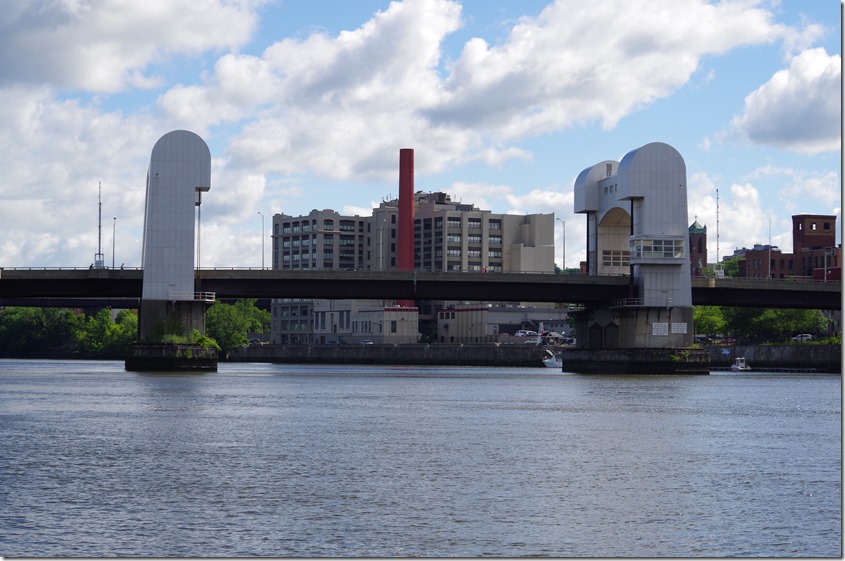 Shorty after Troy we came upon our first lock. It called the Federal Lock  or Troy lock.  This is the dam next to the lock. 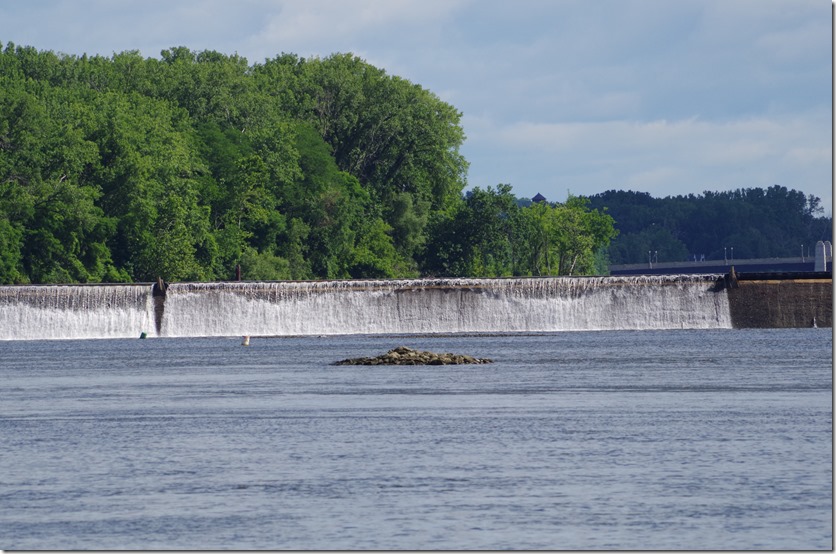 This lock is much smaller then the locks on the Mississippi. 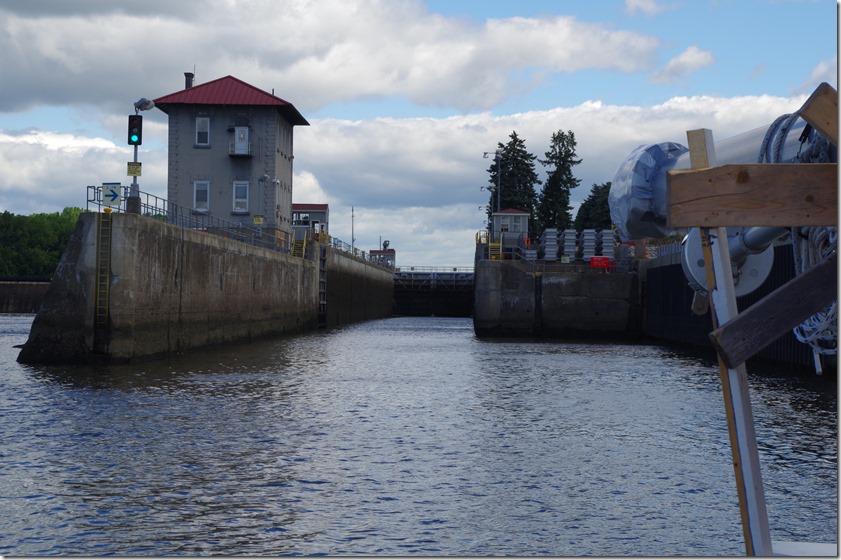 This lock had pipes to tie my line around. Bryce is up on the bow with the stick to keep the mast from hitting the wall.  This picture is looking toward the rear of the lock. 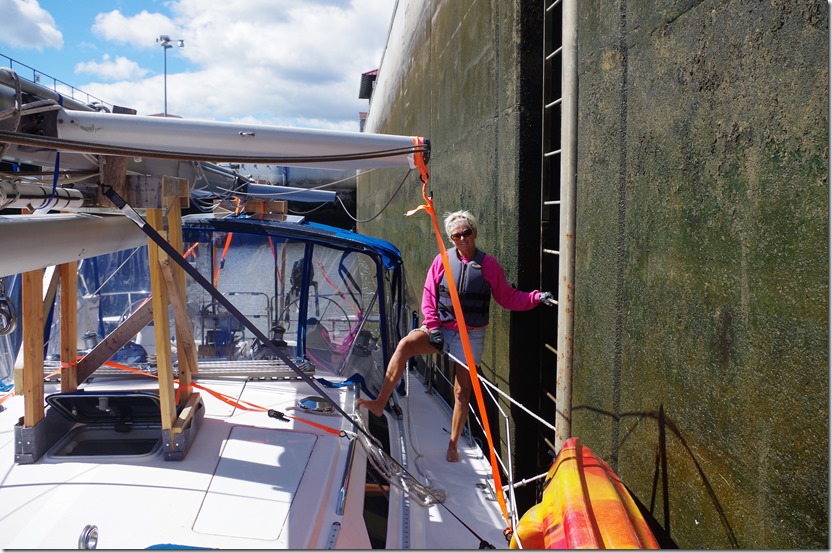 The view just keeps getting better.  Looking forward in the lock. 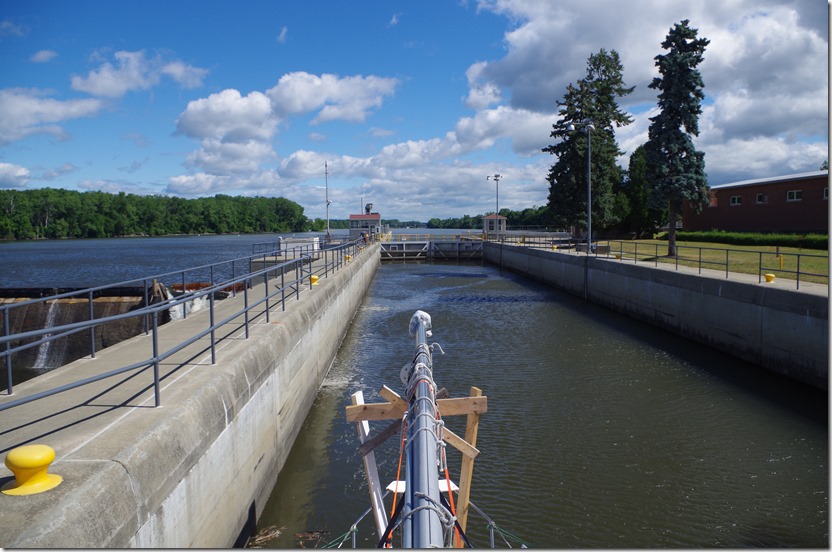 It was long we came upon our turn near Waterford when out of the blue we were at lock E-2.  This picture shows a fork in the road.  Right takes you toward Montreal, left toward Erie (where we are headed). 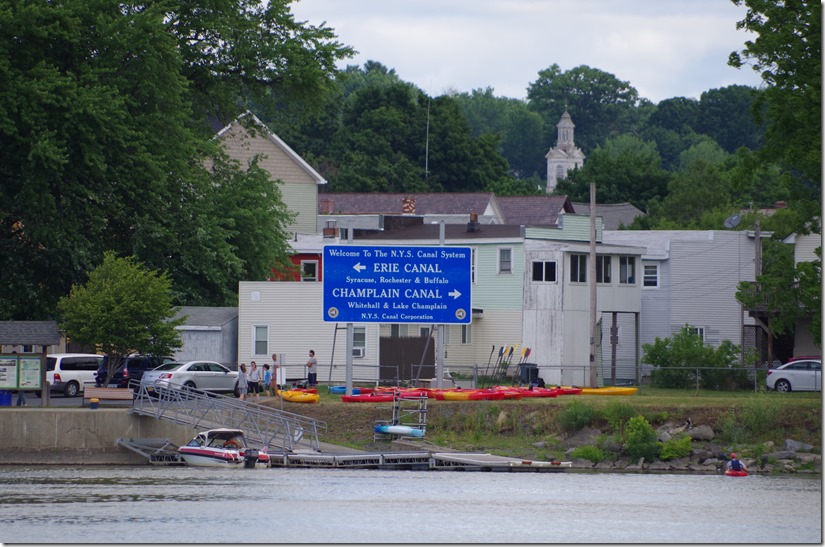 This is where the Erie Canal starts. It begins with lock E-2.  Apparently they don’t have a E-1. Not sure why.  The next 5 locks are close together and take us up 150 feet. 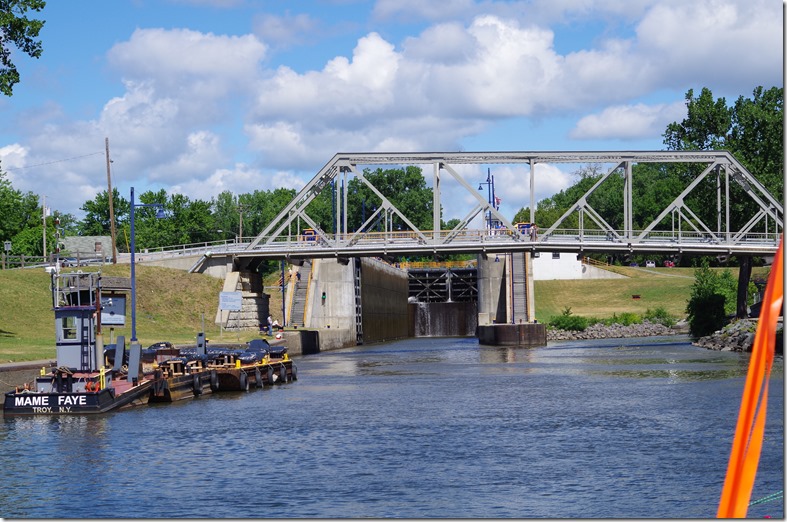 As we approached the lock at lock E-3 we had tourists watching the sailboat (Beauty) in the lock. I waved and ended up talking to them. It was kind of fun. 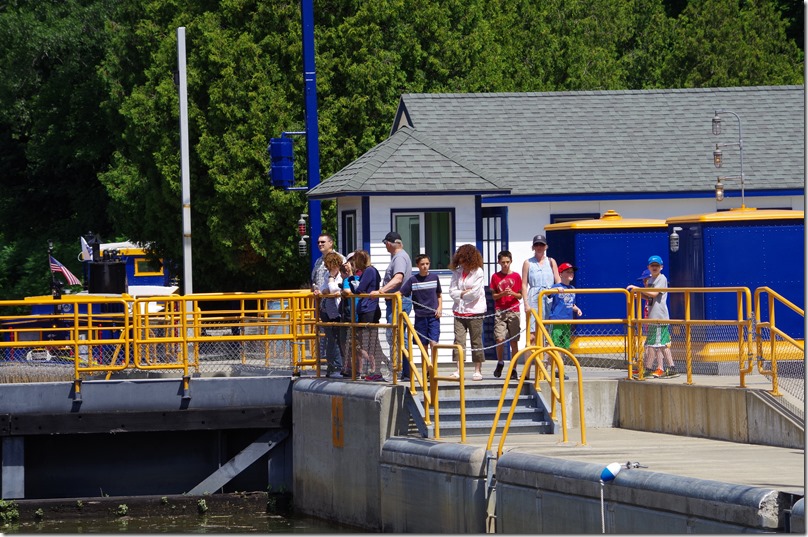 This lock had lines to hold.  I am not a fan of them but you do what you have to.  After having a few upsetting words with Bryce who wasn’t my best friend at the time.  A shot of Goldschlager helped me get through a total of 8 locks that day. 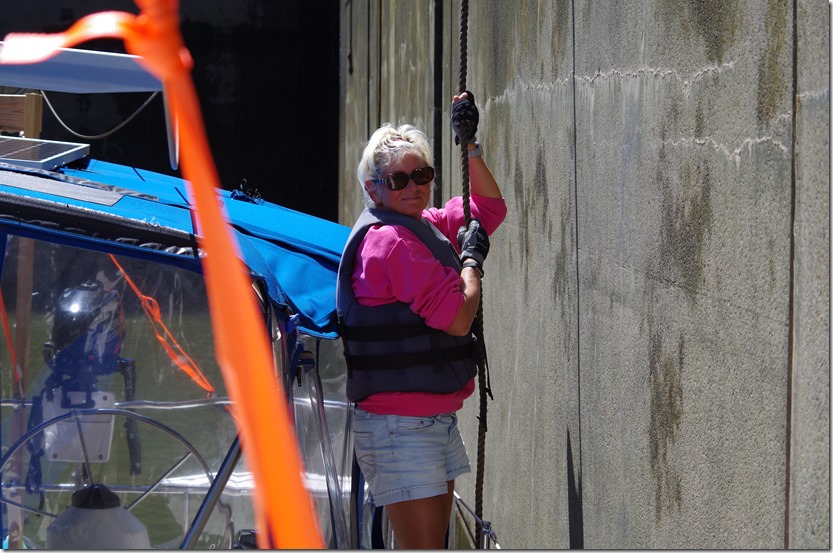 We looked at Active Captain and we headed into Scotia. They have slips for 20 dollars a night; 30 with electric. 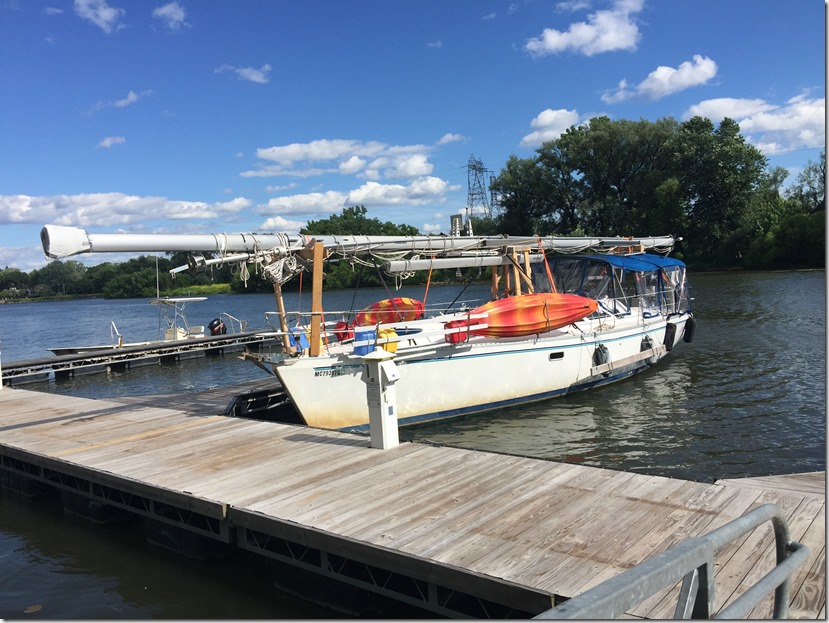 The winds were blowing pretty heavy; nearing 20 knots. As we pulled up to a slip, a young man came over from his boat to give us a helping hand. After we settled in, we had Dave & Donna over for drinks before we left for dinner.   They are good people too. 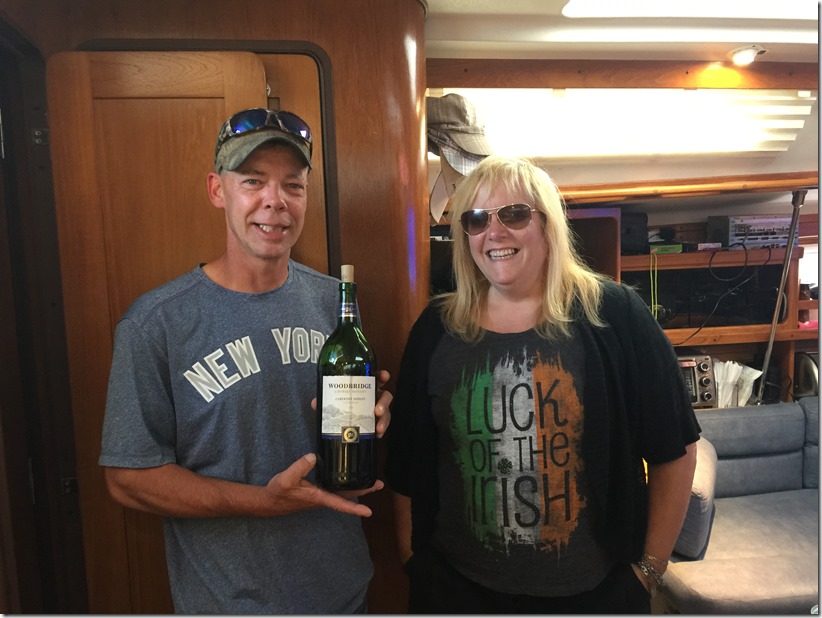 We went out for dinner at the Glen Sander’s Mansion Restaurant.  I really didn’t care for the food.  The best part was my shrimp and it was a four course meal. Bryce looks so tired. 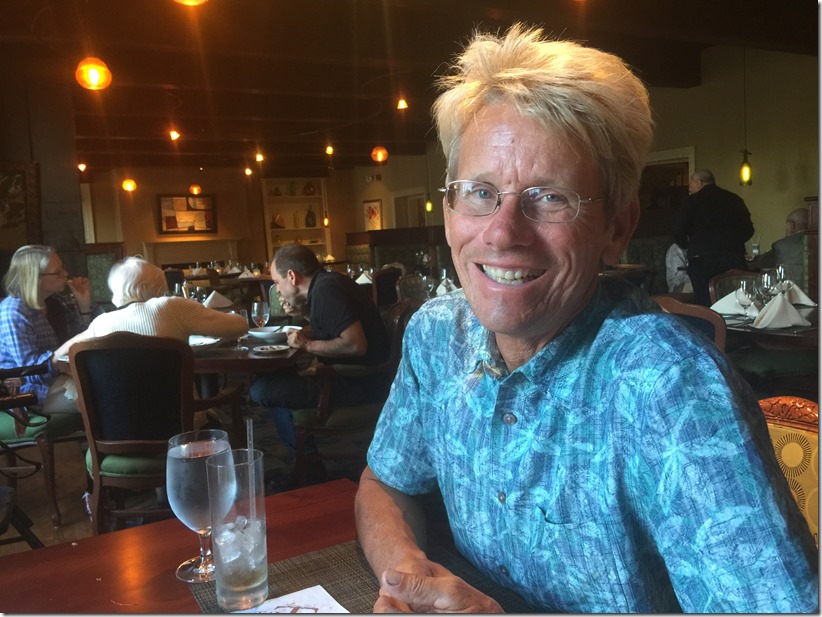 Good night everyone.. Thank you all for following us.