We spent two days in Scotia. Bryce called a taxi to take us to a must see Central Park Rose garden. I had to laugh it was only 4 miles away but by taxi it felt a bit longer. The taxi driver took us the scenic way. Through the rough part of the town.    The Rose garden was nice but the previous storm did a ton of damage. We must have seen a dozen trees down. The roses looked a bit dead. I think they were thirsty, maybe wind blown from the storms. We walked around the park they had a nice pool for the locals to use and  great play ground. There was also an ice cream vendor there with his truck. You know it… I had to have an ice cream.   I really don’t know between the two of us who likes ice cream more. LOL

We had very bad storms that passed though this area. It knocked down numerous trees in the area. Clean up time.

This is the local pool area. Many local families were waiting for them to open. It looked like a lot of fun. 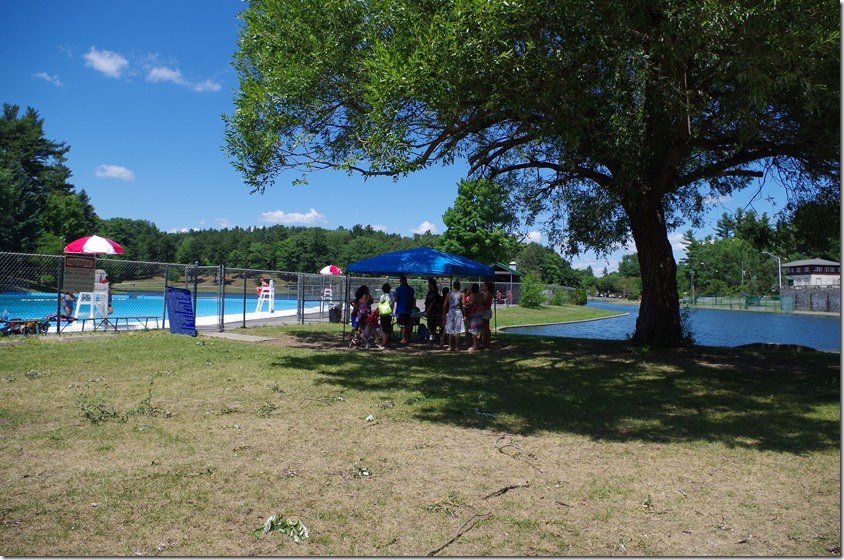 After we took our expensive taxi cap ride back.  We had him drop us off at “Jumpin’ Jack’s” restaurant. It is a local place. Kind of like an old A&W except they have picnic tables to sit at.   We had to try it. The place is always full of people waiting to eat here.

Well.. I think my dress might be a tad short to ride a bike.  LOL  Good thing that is a piece of art. LOL

Aw… look Beauty got a bath. Bryce you did a great Job. 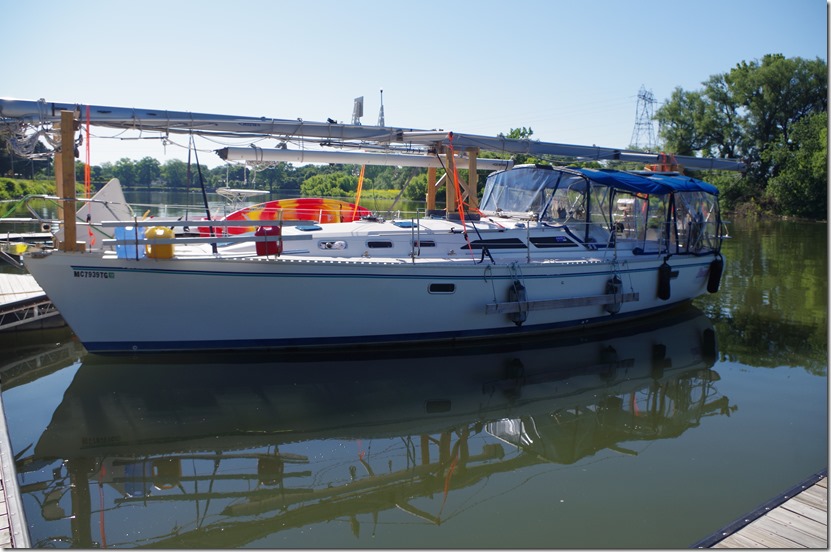 You know in Scotia they put on a water ski show for whoever wants to watch.  The bad part is… They like to irritate the boaters. The do not respect the boaters on the City docks.  According to the city doc personal they have been trying to get no wake area buoys out there. The waterski team is very disrespectable. Bryce actually walked down and asked them how much longer they were practicing. He mentioned that even though the area was not no wake, they are still responsible for any damage done by their wake. They stopped shortly after that. They throw such a big wake, it cracked the bow protector of the jet-ski as the wake pushed the jet-ski into the stern of beauty.  It must have been newbie day, because the skiers seemed inexperienced.

The following morning we headed up to lock 8, 9, 10, 11, and we finally stopped after proceeding through lock 12. The sad thing is for some reason my camera is acting finicky. So the following photos were taken with my iPhone.  So picture quality is a bit bad.

This is lock 9 it has an 15 foot lift.  It is funny because as we pulled into the lock, it seems to be very windy and when we reached the top of the lock, the wind disappeared. 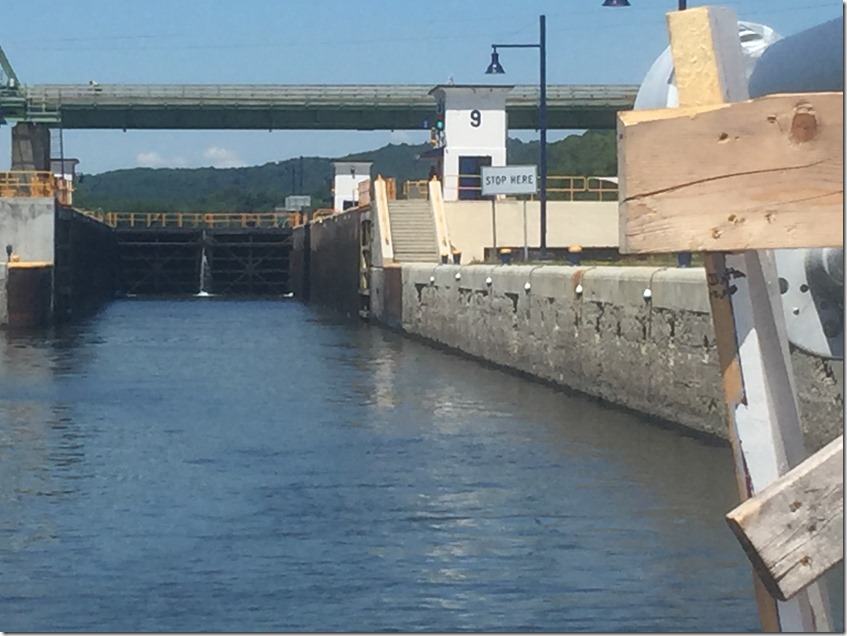 When you reach the top of each lock, you can see the information on that lock. It also tells you how far to the next lock. The operator of the lock will also ask if you will be locking through the next lock. He will call the next lock and let them know you are on you way.

Lock E-12 (Tribes Hill) had an 11 foot lift. We pulled over after our lift on E-12 for the night. Many of the locks will let you tie up for the night. But not all have nice walls to tie up to. It was very nice here. We took our lawn chairs and walked across the parking lot to the shade trees to cool down a bit.

One thing I haven’t been writing about that maybe I should add is the train system on the Erie Canal in the Mohawk River. You can not escape it. As we sat in our chairs on the banks of lock E-12 or on the docks of Scotia or wherever you are, you will hear the sounds of the trains passing by 24/7. 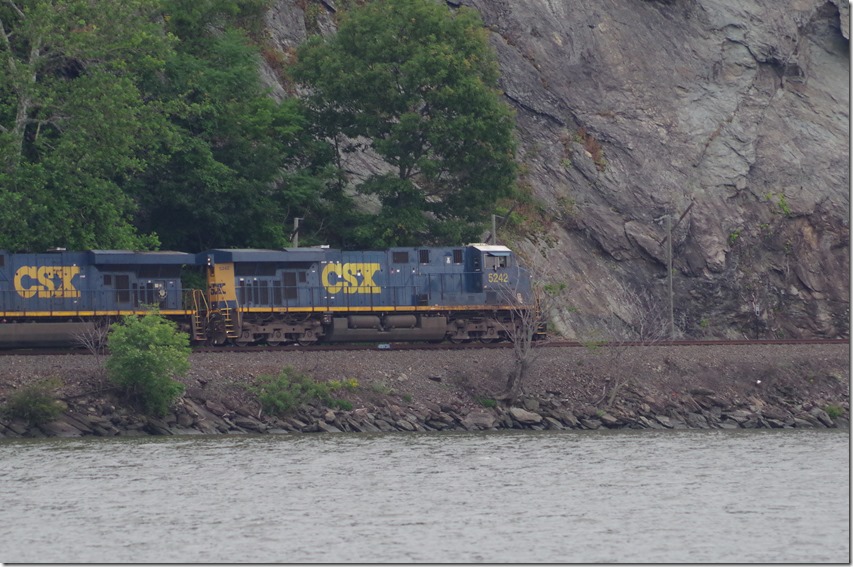 This is lock E-13 (Randall Lock).  Here we talked for a bit with lock master Mark. This lock has an 8 foot lift with lines. Some of the locks have pipes that you can wrap your springer line on. But that was only the first few locks at the beginning of the Erie Canal. After passing through E- 13 we headed to lock E-14 (Canajoharie lock). It also had an 8 foot lift.   We continued on to  E-15 Lock. 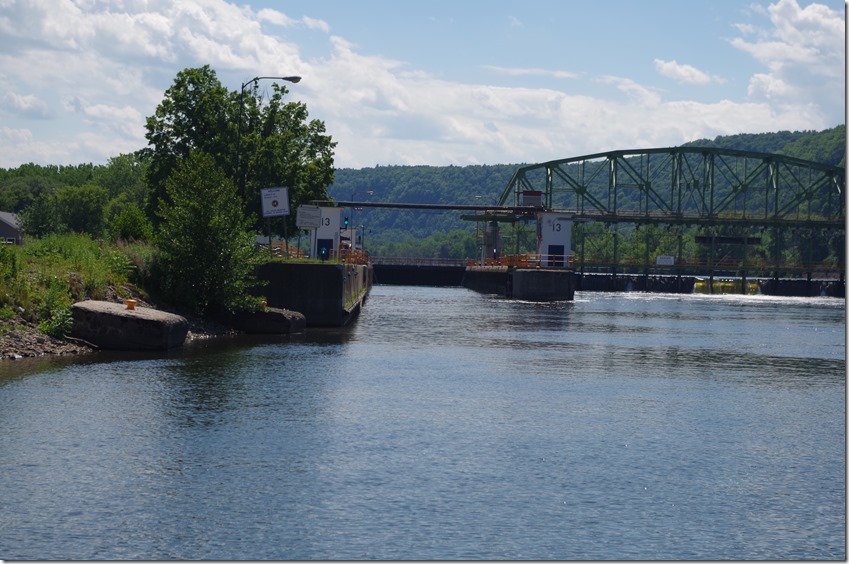 We entered lock E-15. The Fort Plain lock. It had a 8 foot lift and it had pipes and lines.  You see the line Bryce is holding? Well we both hold a line. One of us in the bow; the other on the stern.  When the lock master closes the gate and starts to fill up the lock with water it creates a whirlpool affect. Let me tell you… I have to hold on tight to that line. My arms might look like a guy with muscles by the time we are out of the Erie canal system.

Marc the Chief lock operator from lock 13 (Randall lock) came to lock 15 to visit with us. We learned a lot about locking and what all happens in the winter. They drain all the water that they can out of the Eire Locks to do maintenance on them.  We also learned that the complete operation and maintenance of the Erie Canal is the responsibility of the State of New York, rather than the Army Corp of Engineers like all other waterways in the US.  So the Erie Canal is quite unique in that respect.  New York has their own fleet of boats and barges to dredge the canal also.  They laughingly call them the New York Navy.  We were quite impressed by how well maintained the Erie Canal locks, dams and boats were. 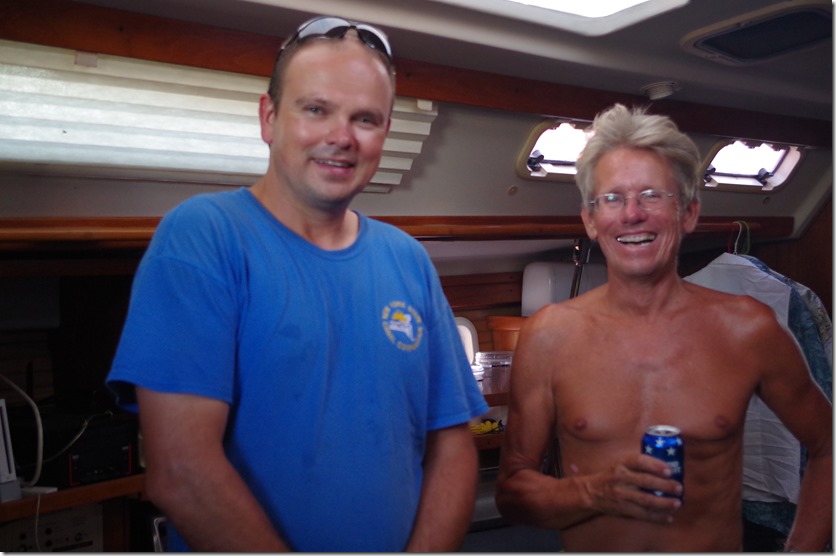 After Marc left we sat on the side of beauty and had a cup of coffee. The heat was finally dissipating for the evening.  George loved this spot, it was one of the few times he jumped off the boat.  He wanted to munch on the grass. 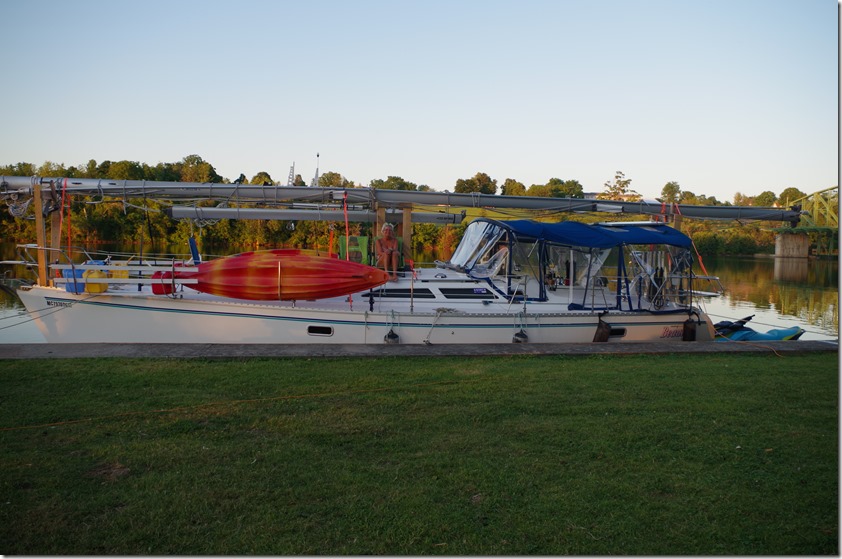 As always thank you for following us.