What a great day back in our own stomping grounds. We are, as most of you know, in Lake Erie. We still need to go back up the Detroit River and to the top of Lake St. Clair. So with that said, you are not done with us yet…LOL The water temp here in Lake Erie is so warm. I think I have done more swimming here then on the whole trip. OKAY….. so I don’t actually swim but I do putts around the boat ladder and float in my chair.  We really needed to provision for the rest of the trip home. Put-n-Bay has a super market we will go to.  I have had nothing to make for breakfast, so I have had to make mac & cheese.  Instead of using milk, I used coffee creamer. It was quite tasty. Kelly’s Island Had a restaurant we could jet-ski to.   Finally, after Bryce finished up with work, we decided to jet-ski over to West Bay Inn restaurant. We needed something other than Mac & Cheese…

Yep… this is me ready to enjoy my day… 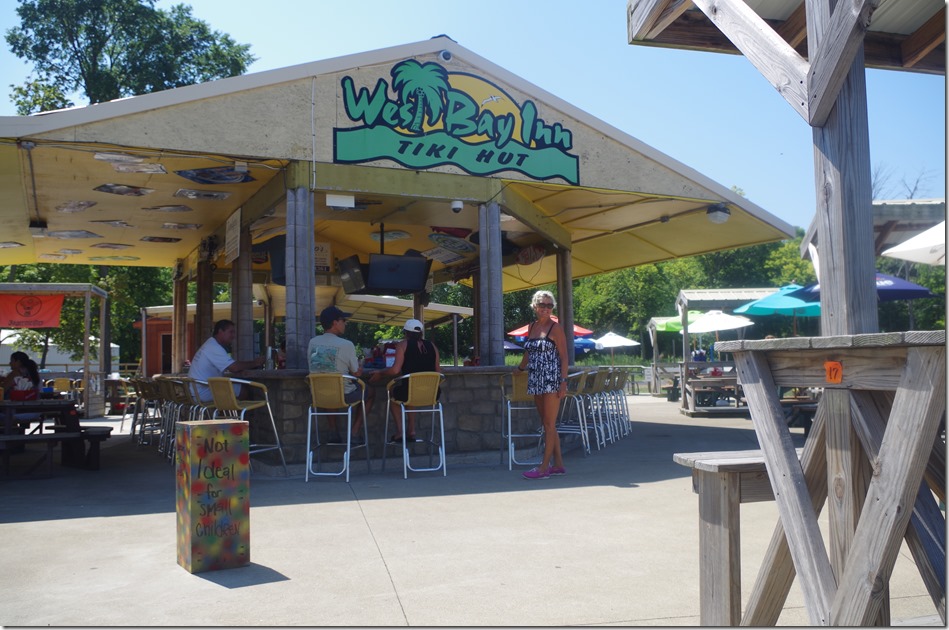 It is so neat that they have a nice place to dock up to.

Okay Bryce, put the camera away.  I ordered the coconut shrimp. They came with these tiny little balls deep fried.  So I tried them.  They were small pieces of pineapple breaded and deep fried. I don’t normally eat deep fried foods; but these were good.

We drove the jet-ski over to the beach to relax and enjoy our day before we head to Put-n-Bay.  As Bryce was putting out the anchor, I carried the umbrella and one chair up to shore. “Jane.. Jane is that you?” I heard some one ask.  I turned to see who it was and if they were even talking to me. LOL Well, I couldn’t believe it. There was  Ryan Kelly with a few of his buddies enjoying their day sitting in the water with a can of beer. So we joined them. It was really nice to visit with Ryan and his friends.

Ryan is between his friends. My apologies; neither Bryce or I remember their names. But they are great guys.    Happy anniversary to Jessica & Ryan

Ryan & Jessica have a really neat trailer-able boat “Knot a Call” it’s a 25 footer and it only drafts 2.5 feet of water. They are expecting there first little sailor to start joining them on their cruises.

Well it was getting time to sail over to Put-n-Bay.  We said our goodbyes and headed out. Tonight we will tie to a mooring ball.  It has been a while without using one or getting a slip and this will help using the water taxi to carry back food.