OM..Goodness, I really never realized how beautiful and clear the water is up here in Presque Isle. We stopped here on our last adventure to drop off Shawn and Jim Rathbun: Bryce’s sister and brother-in-law. We really liked what we saw and were looking forward to coming back. Yesterday we Kayaked the bay. If only the water was warmer; I could snorkel here.  This is a really neat place to stop. Not too many people/boaters know about Presque Isle. So if you are in the area you should stop in and visit the area. Oh yeah.. the restaurant at the marina gets a 5 star from us. I had Maui Maui for dinner and it was great.

The water is so clear.

This is me enjoying the Presque Isle Bay.  Winds were light.. Sun was shining. 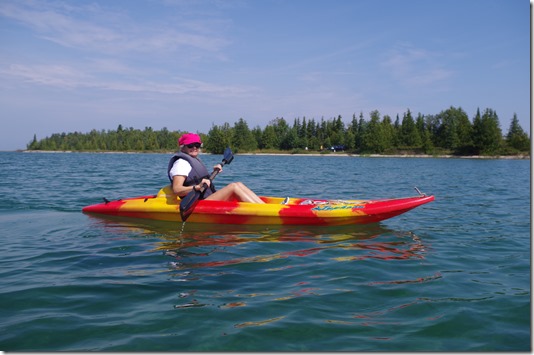 We decided to explore this point so I beached my kayak on the rocks. I believe this launch ramp that is open to the public.

We found a hidden pond between Lake Huron & The rocky point on the south side of the bay. 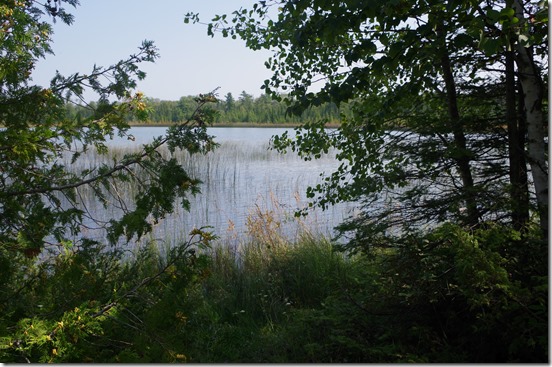 Presque Isle anchorage is one of the best on Lake Huron. From Alpena it is approximately 40 miles to this area. The bottom is sandy and water depth 8-14 feet. Crystal clear water.  Although not as clear as the Bahamas.

Bryce just had to drop in the jet-ski to see how his new hoist was working. Even with his hand in a cast nothing slows him down.

The winds are turning Northeasterly 25 mph ( Wednesday night), so we headed into the harbor and took a slip. It was a great decision. We were able to walk to the old light house and get some Fitbit steps in for me.  We took slip 16.  The docks and the whole marina is very clean and in good shape. They use channel 9 on the radio or phone is 989-595-3069.  No issue with water depth and it is crystal clear in the harbor also.

This is us Beauty is resting for the night.

We took a walk around the marina and then off to the lighthouse. The new lighthouse is a 123-foot tall and is the known as the tallest Lighthouse on  the Great Lakes but I couldn’t get to it to get a picture. This is a picture of the old lighthouse.  Due to the rocky shoals, there are numerous shipwrecks in the area even with two working lighthouses.

The Bronze Bell was taken from the old Lansing City Hall clock tower when the building was torn down in 1959…This is crazy, the bell weighs 3425 lb. It’s also 60% heavier than the Liberty Bell. It was built (cast) in 1896.

Bryce had to be put in irons because he is doing to much with his broken had and needed a time-out.

We headed back to the marina. I was getting hungry. We stopped and spoke with a all of the sail boaters before we headed back for the night.  We met a number of people here. 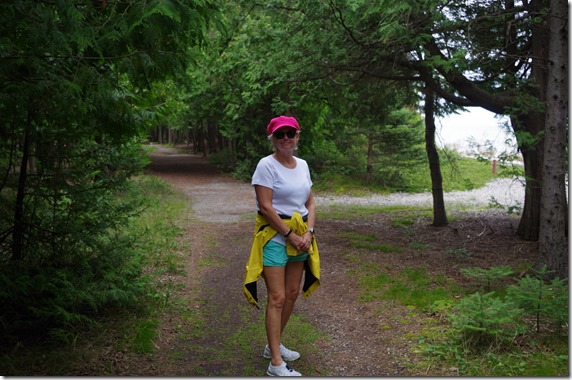 The following day we were getting ready to untie our lines when a guy walked up and started talking to us. Then his wife joined us too. They had noticed us anchoring out as they were leaving and sailing down to Harrisville. They noticed we had taken a slip for the night when they came back to fetch their car. Kirsten & JaneK are owners of a 36 Catalina with their dog Bailey. Boat name (AirBorne). 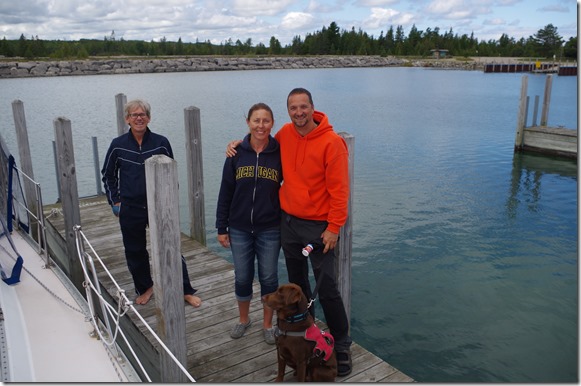 After we said our goodbyes we headed out into Lake Huron. Remember I had said that we had high winds that night? Well, even though the winds were lowering we had rollers again out of the east coming across Lake Huron from Canada.  We were just hoping that we had enough winds to keep our sails on bloom. That makes a sailboat very steady.

Nearly six hours later we motored into Hammond Harbor for the night. We anchored on the West side of the break wall. It was a great place to anchor for a few hours. Of course when night sets in and the winds start blowing again the anchor alarm goes off. Sure enough we have to pull up anchor and try to see our way into the docks in the dark.  We did fine but let me tell you it looked like a huge boulder but it was all seaweed.  Seaweed does not hold well when the winds come up.

The smiles before night falls….LOL 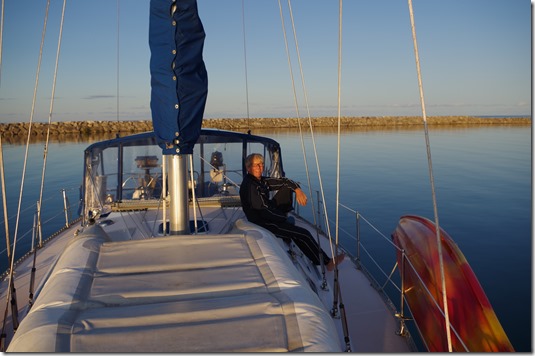 This is Hammond Harbor a great place for a slip and very nice people here. the phone: 989-938-6291 They also answer the radio on channel 9. They do have very cleans restrooms and diesel, pump-out, dog-run.

Thanks to you all for following us and reading about our journey,