We have had numerous requests for the conditions of our sail and our specific route from Marathon Florida to George Town.  On the charts, it appears to be a bit shallow.  However, we found quite the opposite.  The water was quite deep and only became shallow near shores.  In general, the water goes from deep to shallow quite slowly on the Banks

Our crossing of the Gulf Stream to the Bahamas Bank is shown below.  We sailed a comfortable crossing under a first reef.  The actual crossing to the edge of the banks was about 130 miles and it took about 15 hours.  It was all beam winds (and beam waves & swells) at about 15 knots.  We took a small jog around an 8.2 foot shallow, but in hindsight, this was probably not necessary.

The chart showed 18 feet as we crossed into the banks, but we noticed the actual depths remained over 100 feet in this region and the depths shallowed slowly.  Going across the banks, the depths were much deeper than charted.  We finally decided, the charted depths must indicate the shallowest areas, but the average depth is not actually apparent.  Near shore, the depths were closer, but still about 2 feet higher than charted even considering tide.

On the wind prediction below, I have drawn our route in red.  It predicts 15 knot winds for noon on Thursday the day we left.  This chart shows ideal wind conditions for a crossing of the Gulf Stream.  AS shown, we prefer south winds to blow in direction of the Gulf Stream current.  The Gulf Stream often flows over 2 mph along the Florida coast.  If the winds are the opposite direction (from the north), waves become uncomfortable because the winds oppose the current.

Wave predictions were 3-6 feet and that’s what we saw when we left.  These waves settled down over the next 15 hours of our crossing to the banks.  However, the waves were beam to and the winds were beam to.  This wind and wave direction makes the crossing very fast and very comfortable.  Our boat prefers beam seas and beam waves.  Our speeds varied from about 8 to 10.5 mph under a first reef.

On the flip side, we would never take a power boat across in these conditions.  Beam to waves on a bridge boat are extremely uncomfortable.  So power boaters require different crossing criteria than sail boaters.  For those that are unaware, in addition to about 30,000 miles on our sailboat, we have that many miles on our power boat. 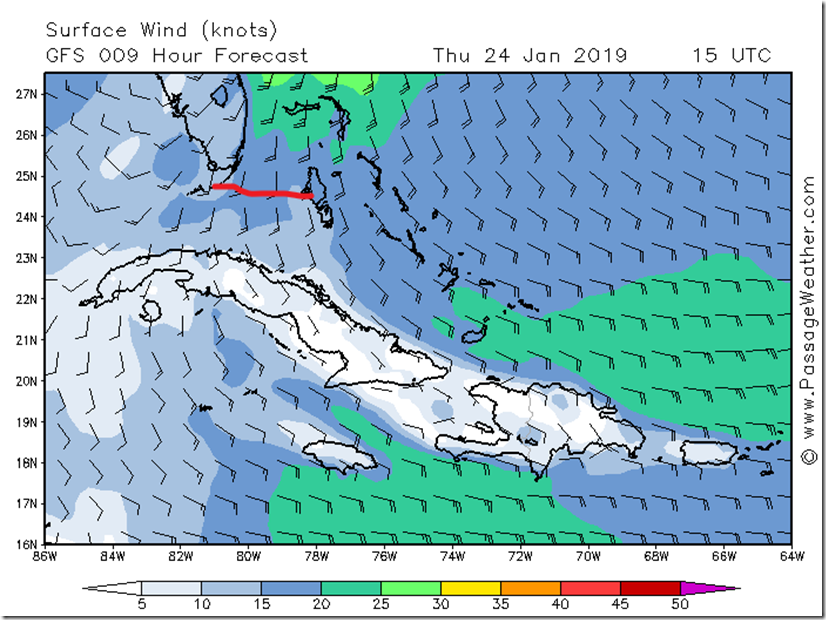 The wave predictions below show the waves are expected to be 1-2 meters on our route at noon the day we left.  We actually left our mooring ball just before noon.  These are the wave heights we saw when we left, but these waves settled quickly to probably 1-3 feet with maximum 6 foot swells.   The swells are not predicted on the wave charts.

The next day (Friday), after crossing the Gulf Stream, the winds switched direction 180 degrees and turned Northerly.  This wind switch was a key point in our decision process to sail the western shore of Andros.  These Northers over the next few days would propel us down the western shore of Andros.  And the island of Andros would shield us from the winds and waves while we were anchored.  So in spite of what people thought of our course, this was a well orchestrated cruise. 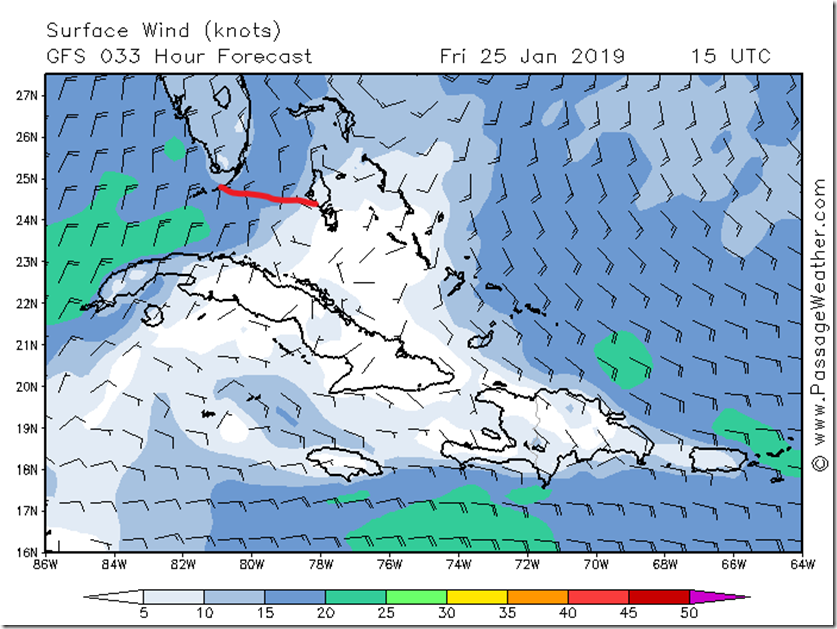 In addition to local wind and wave conditions, we look at the predictions for waves and winds on the wide Atlantic so we can get an idea of the swells that may be coming from 1000 miles away.  These swells are rarely indicated on the wave charts, so a vigilant sailor always looks at wave and wind conditions thousands of miles away.  This is particularly critical for power boaters, who often find the wave heights are higher than predicted and a different direction due to swells from 1000 miles away.

We also look at the pressure charts to see where the low pressure areas are and where they are going.  These are all factors we consider when making a crossing or any time we jump out into the ocean.  Its not that we can’t handle heavy seas, but we prefer to be comfortable.  We are always looking a week to 10 days in advance before any movement of the boat.

As an example, the wind chart below shows the winds on the day of our crossing and it shows the strong southerly winds in the North Atlantic.  These winds were also southerly and easterly on the day before.  We are most concerned about wide area winds and waves on the days leading up to our crossing because those conditions often determine the wave swell height and direction we will see from far away.

We rarely go out when the day before had very high winds and waves in a wide area that are directed to our intended route.  On Wednesday before we left, the waves were 6-12 feet.  However, these swells coming from the Atlantic would be tempered by the Bahama Banks because they were coming from the south east.  In the North Atlantic, the 35 knot winds are blowing from the south, so North Atlantic swells will not bother us.  Now if the winds had been northers in the North Atlantic, particularly in the days leading up to our crossing, it could cause uncomfortable swells on a crossing to Bimini. 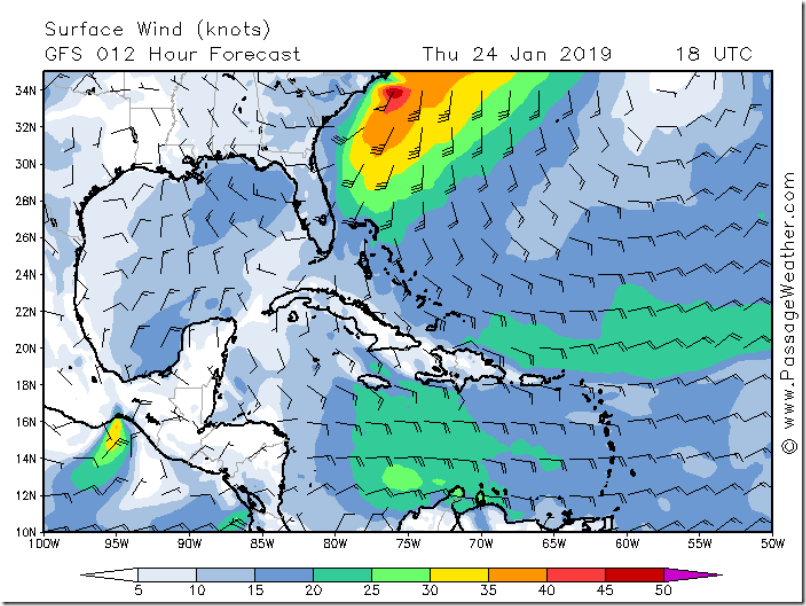 On the second night, we anchored at waypoint location 1460:  N 24 20.696’ W 78 12.821’  water depth was 8.6’ at low tide; charted depth was 5.9’.  Low tide was about 0.2 feet below zero.  We were shocked to see anchored closer to shore was the 150 foot boat Flamingo Explorer (10 foot draft).  The winds were North at about 15 knots, but we were protected from most waves by Andros and the shallow water.  This is one of the coolest things about the Bahama Banks.  Even in high winds, the waves can’t get very high because of the shallow water.  And the huge Atlantic swells only make it a short distance onto the banks.  So sailing the Bahama Banks are like sailing a gigantic shallow lake.

Looking at an overall map of our Andros route, After getting to the banks, we made our way down the western Shore of Andros.  The winds were north at 15-20 knots, out of the port quarter.  So the sailing was fabulous in the shallow waters of about 20 feet.  Charted depth was 8-11 feet.  So water depth was much deeper than the charts indicated.

After leaving our anchorage at 1465 on Sunday morning, the winds turned south, so we tacked to waypoint 1467 shown on the chart below. Again, the winds were about 15 knots, so another great sail.  This small jog due to winds on our nose lead us around some shallows at the bottom of Andros.  Although in better winds, this tack would not have been so far out.  Waypoint 1467 is: N 23 32.679’ W 78 07.650’ 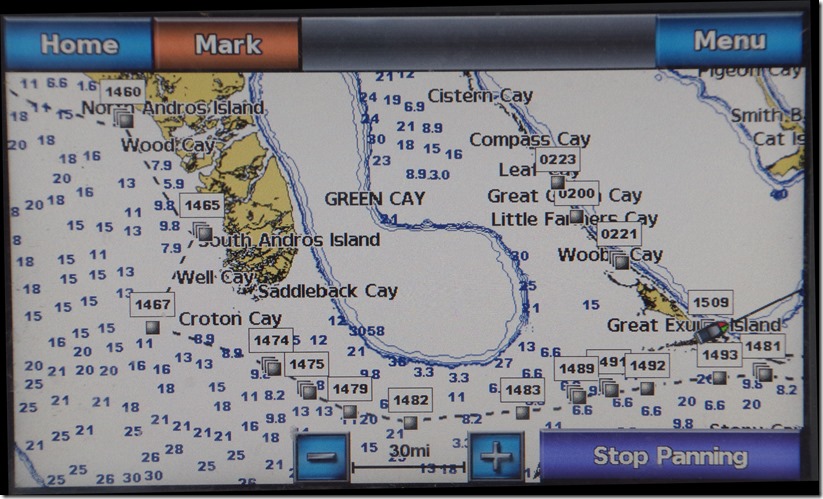 These Southerly winds lasted for Sunday, Monday and Tuesday.  The winds allowed us to sail all the way across the bottom of Andros below the Tongue of the Ocean all the way through Comers Channel as the wind chart shows below and the GPS map shows above.  Again, this was part of our carefully choreographed route that we had been planning prior to our leaving Marathon Florida.

At waypoint 1474 we had a soft grounding on what we think was a wreak.  It was too close to the shipping lane coming out of the Tongue of the Ocean to be a shallow.  However, heavy rain prevented us from seeing the bottom.  We were cruising under only headsail and motor through the reef for safety in case we ran into shallow water.  In 18 feet of water, the front depth gauge suddenly changed to 7.7 feet.  We released the Gen sheet and backed away and went a hundred yards north around it toward 1473.  After this, the rest of the trip was uneventful.  At waypoint 1479 the way-pointed depth is 17.7 feet.

We continued on out of the reef through the deeper waters below the Tongue of the Ocean.  The typical water depth was 26 feet between waypoint 1482 and 1483.  The south winds allowed us to sail till about 9 pm where we anchored Monday night near waypoint 1489.  We decided not to go on through the night into the shallows beyond 1489 as we did not know what to expect.   Particularly since we had no moon and we were not on a sailing line.  It was a very pleasant anchorage with barely any waves in 24 feet of water.   Winds were light, below 10 knots.

Since this area near 1489 seemed so shallow, we place the GPS waypoint 1489 near the charted depth 8.2 feet.  This was deeper than the 6.6 foot areas around it.  We were surprised to see that this whole area was no less than 25 feet deep!!  We are not sure what is going on with charted depth here, because in the daytime, we were unable to see any shallows visually.

We cruised through the next area below and noticed water depth was quite deep.  We dodged any charted shallow areas and I think minimum depth we saw was about 16 feet through the area shown in the chart below to 1494 at the entrance to Comer Channel. 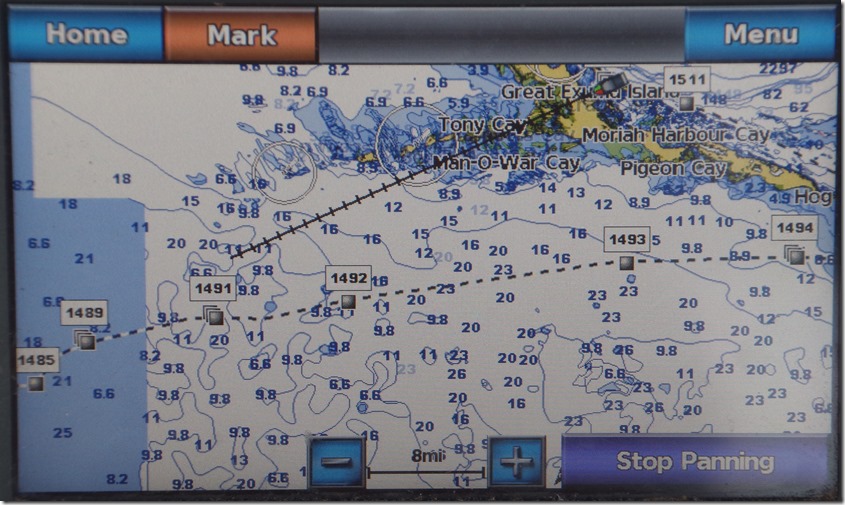 The final path through Comer Channel all the way to George Town is shown below.  We came through Comer Channel around White Cay point at high tide.  The minimum depth we saw was about 9  feet.  We followed the sailing line.  It could be the depth may be deeper off the sailing line.  An east-south-east wind blew us through this area all the way to 1497.  At which point the winds turned north-east, we dropped sails and ploughed through the waves on our nose.  We dropped anchor at 11 pm in the protection of the harbor. 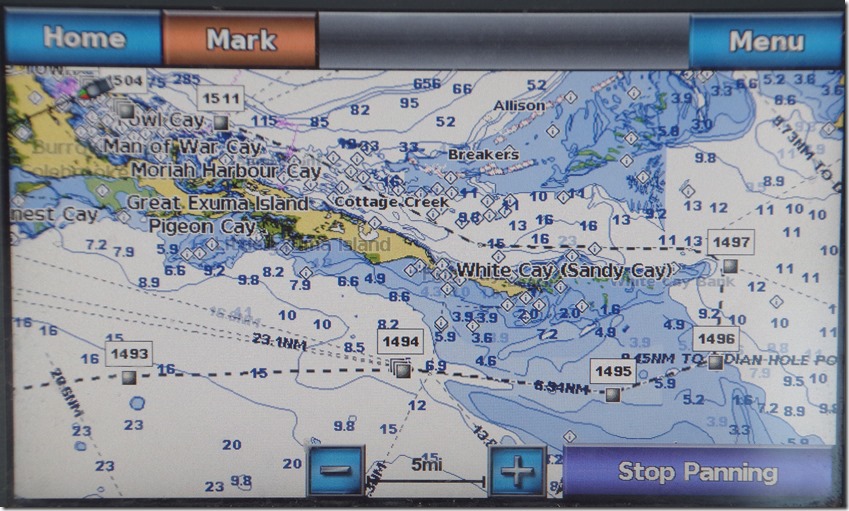