A week in George Town

Well, we have left George Town. But while we were in George Town we picked up a hitchhiker all the ways from Michigan. Her name is Sheila she is Bryce’s sister. It is really nice to enjoy her company. While in George Town we took a exploration hike along the Atlantic side of Stocking Island. It was so beautiful.

This is Sheila and Bryce such a great sibling love…. 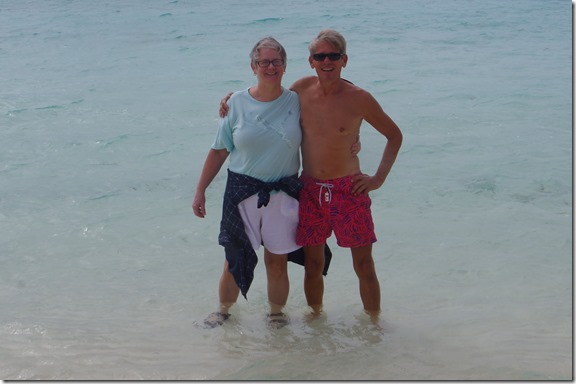 We followed a well marked path to the East side of Stocking Island.  The trail markers were a variety of things hung from trees and poles like this.

It was such a nice area the path looked so tropical.  Small palm trees and bushes lined the well worn path.

Sheila & Jane went off to explore the shore.  The winds on the Atlantic side stirred up the waves.

Small fish swam in all the little tide pools. We saw little plants growing in them along with other sea creatures.

Bryce found this cute shell in one of the tide pools.

I found a bench

and relaxed for a spell.

What am I? I move along the ocean on the hard rocky coral.

It imbeds itself into this dry area of the coral. You can see the white that surrounds it after it dies.  It does its job of building the reefs.

Bryce found a part of a keel of a boat. Its where the prop shaft goes though the hull.  The boat did not last long after loosing this!

I love this picture he is so focused on something.. 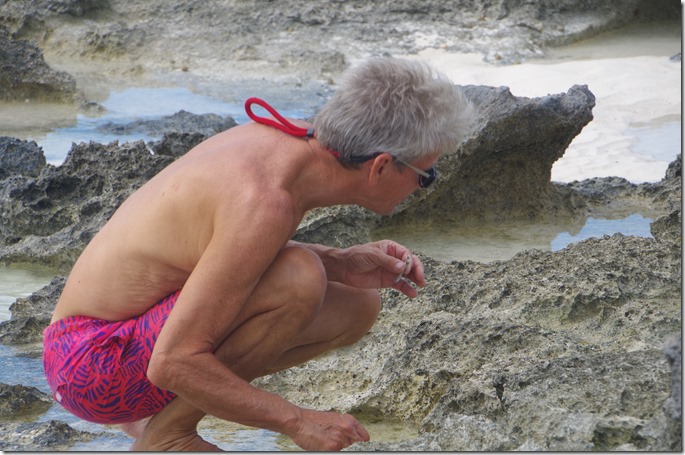 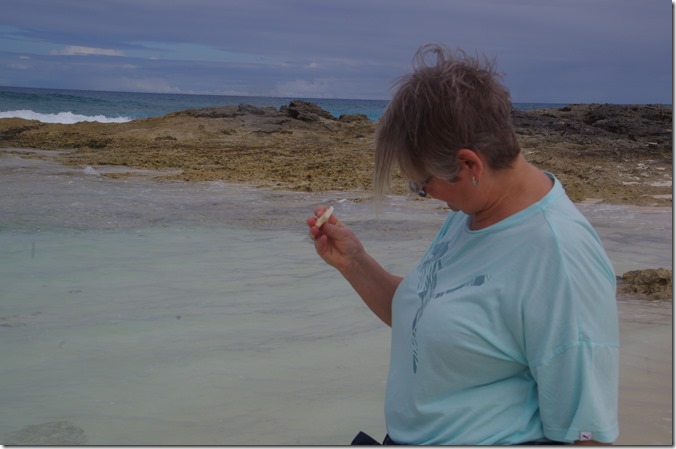 Look at that wave… It’s going to break along the rocky reef barrier.

We need surf boards or body boards. How much fun that would be.  These off shore swells often originate 1000 miles away. 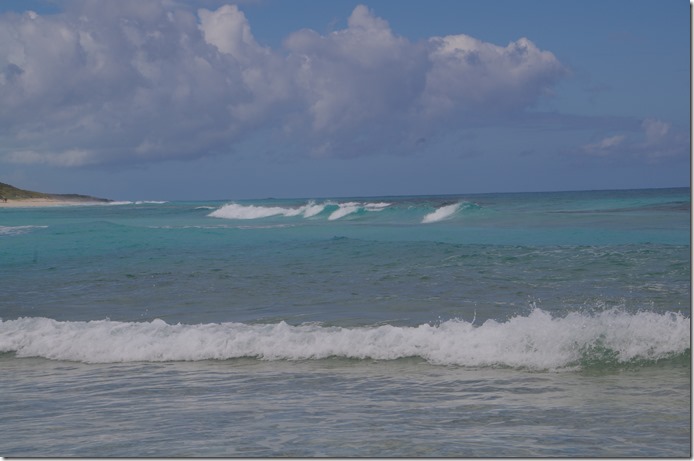 This is such a cute Stone Crab. We found this little guy on our way back to the path.  Just kind of strolling the beach.

After we arrived back to the boat, Bryce thought we were leaving right a away and didn’t tie the dingy very well.  And it floated away. Thanks goodness we had the jet-ski.

A while later we took Sheila up to show her Chat-Chill.  This is a small tiki-hut bar and grill. 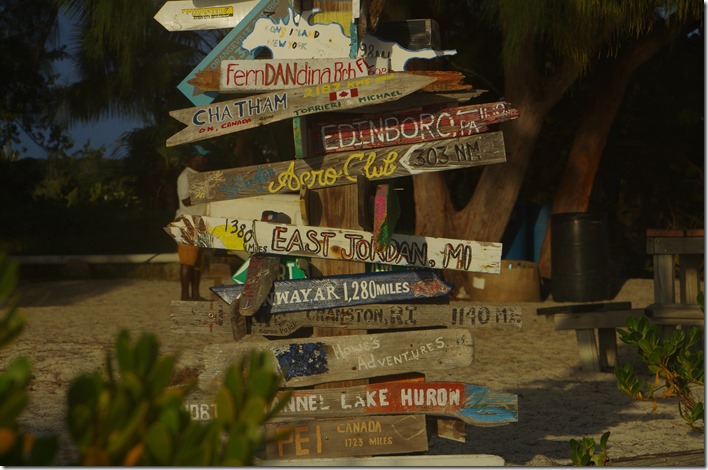 The Bar at Chat & Chill collect t-shirts from all over the world. 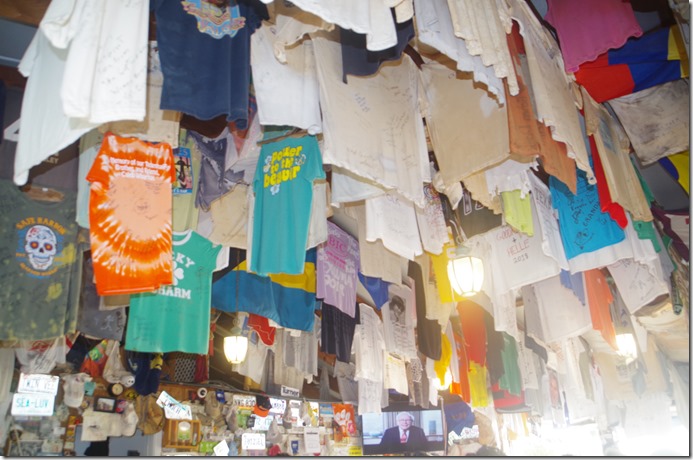 George watch out; dad is petting another cat.  There were three of these kitties roaming the beach. 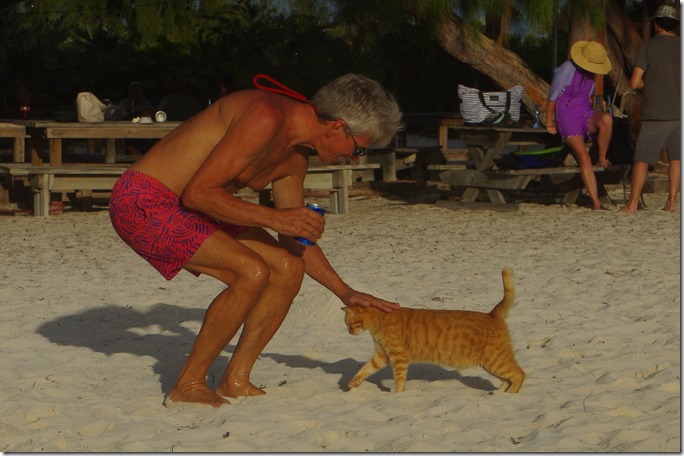 My BFF.. she is okay standing in the water as long as the stingrays are not around.

Two water taxis came in to carry people back to George Town.  These are tourists from George Town that are out exploring. 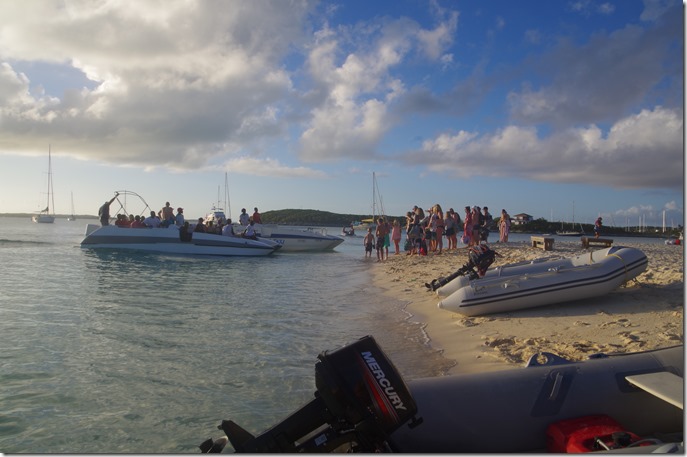 Sunset came and we packed our stuff up and headed back to beauty. What a great day.

Thanks for following our blog!