There is no real dockages for dinghy’s and it is all touristy. But the one thing for sure, the people are friendly.  We took a small tour for about two hours in a mini van with two local sisters.  During our Tour we were educated on the Bahamas life style and a little history.  Did you know that that in 1973 on July 10th after 325 years of being underneath the British rules the Bahamian gained their independence.  However, they remain a Commonwealth of the UK. We also learned that most of the government buildings are color coded. Pink is Government, Yellow is for school, and Green is environmental.   But home owners can decide on their own home color. The minimum wage here is only $5.00 an hour.  So, be kind and tip for services.

We had a great day sailing from Norman’s Cay to Nassau wing on wing.  No motor sound for 45 miles.  Finally had a chance to really use the Whisker pole.  For those of you that don’t know, the whisker pole is the horizontal extendable aluminum pole between the mast and the gen sheet on the head sail.

As we came into Nassau I noticed this unusual home. I think it is a home I noticed a lamp in the window.  I just learned that this was the home they used in 1965 with Sean Connery in 007 James Bond in Thunderball. I do believe it was said this is the home where 007 drives a boat into the house.

We also passed the Atlantis Adventures on our way into Nassau. It is on what they call Paradise Island

We took anchorage near the beach and near where the Cruise ships tie up.  We were anchored of Junkanoo anchorage near the red buoy 6. Every night we sat on the deck watching the Cruise ships leave and in the morning they arrive one by one.  We have seen 6 huge cruise ships at a time come in and dock.   It is fun to see how they maneuver. This one is Allure of the Sea. She is 1180 feet long by X 198 feet wide and she drafts 30.5 feet of water.  She stands 4 times as tall as our sailboat at about 240 feet. She is a huge ship.  Think aircraft carrier size.

Shortly after we anchored, we got visitors from Cordylia II. Louis and Hannah with their two little sailors. What a great family they are. They told us to talk to the manager of Senor Frog for Dingy docking. 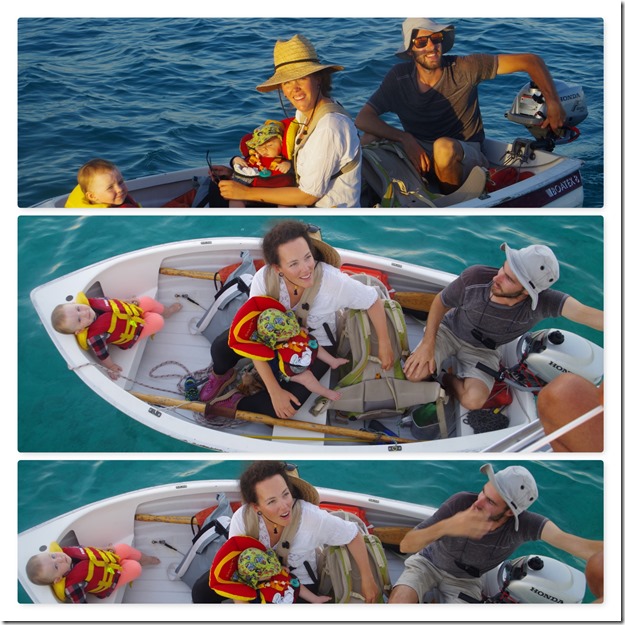 Sheila and I spent the day out while Bryce was working.  We had a nice time..  My day with Sheila was awesome.  We had lunch and drinks and we both bought a new dress. Sheila mighty pretty in this wooden dress LOL 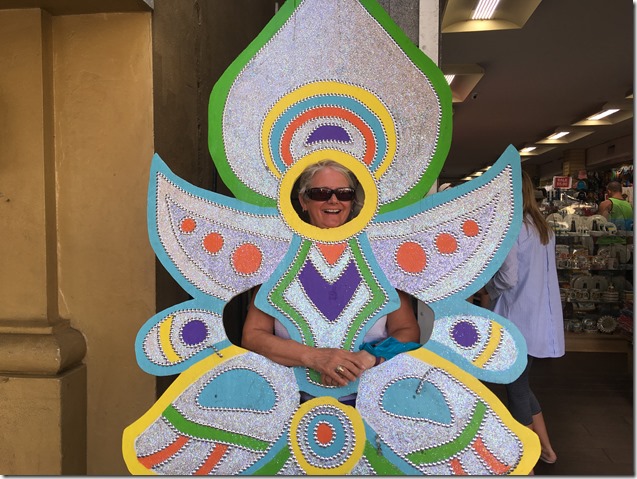 Our anchorage is all but desirable. We have good holding in the sand. The winds have been SE to E. The sounds of sirens, truck with air breaks and just cars blowing horns never stops! We will make the best of it.  Below we watched a Disney boat leave at night.  All ships disappeared at night to go to the next destination.  Then a fresh set of ships started arriving at 6 am the next morning.

On Paradise Island at Atlantis you can stay in the Michael Jackson Suite which is known as the Bridge Suite.  In this picture, you can see what looks like a bridge connecting two towers together however, it is not. That is the Bridge Suite.  The cost for one night is $25,000 with a four night minimum.  For a measly $100,000, you can sleep where MJ slept.

On our tour they took us to the Rum Cake factory.  You really didn’t get to see much of anything. But they wanted you to buy a cake.  We did not because we are not that much of a cake eaters. Okay, Sheila would laugh at that comment considering I made 3 cakes while she was with us. LOL  Bryce loves cakes, but not a fan of rum cakes.

66 Stairs is a very pretty area to explore. It is known as the Queen Staircase because in the 19th century, it was named after Queen Victoria. She was the Queen of the United Kingdom of Great Britain and Ireland. It was craved out of solid limestone rock between  1793 & 1794 by slaves. We walked to the top and There are all kinds of venders to buy things from and a Fort that was shaped like a ship.

These are the two sisters, Nikki and Tashi who took us on a tour. It cost 30 dollars for two hours per person. 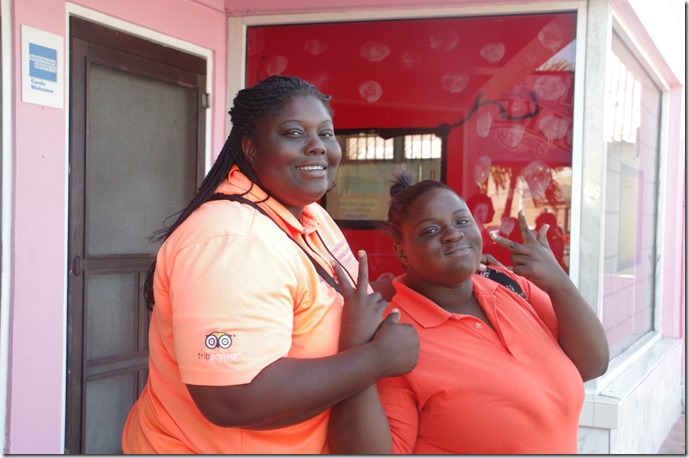 We are presently anchored in the Eleuthera Islands.  You can find our position at https://trackmytour.com/2p4qC 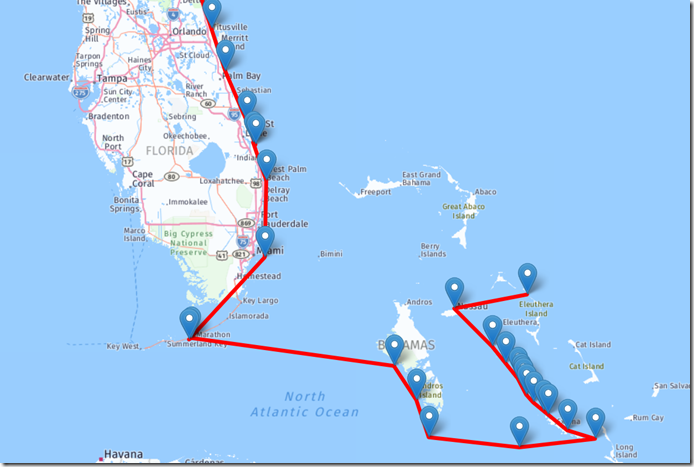 Thanks for following us!