We pulled up anchor with 20 miles to our last lock on the Tenn-Tom. But it was another foggy morning here and we wanted to get the anchor up and be on our way due to a tow headed our way and we were tucked behind a red buoy. We decided not to go around the turn ahead of us the fog was very thick. Bryce and the captain were in contact with each other. The captain on the tow was so helpful he gave a rundown on the where abouts of other vessels. We could just see his barges coming out of the fog on the outer side of the curve. we waited for him to pass and put Beauty back into gear.

As we made our turn around the corner we saw two power boats anchored in the receding fog. 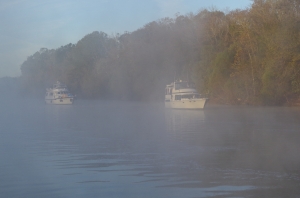 The fog did eventally burn off and the view became beautiful once again. 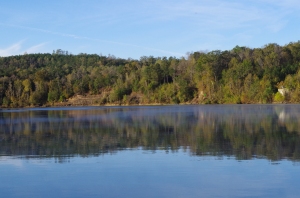 I really don’t know if you can see, but this is the first home we have seen with Christmas wreaths on their front doors (deck). 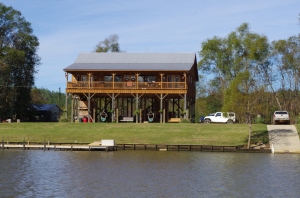 This poor boat by the name of (Grace) looks like it was ran over by something. 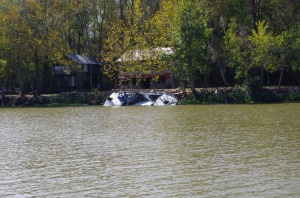 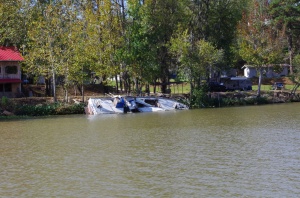 Time to Celebrate to the last lock on the Tenn-Tom. We are very happy as I stated in our last blog we are getting our mast back up on Thursday.👏🏽 Bryce noticed some other boaters were so happy that this was their last lock, they autograft the bollard. No, I did not, LOL 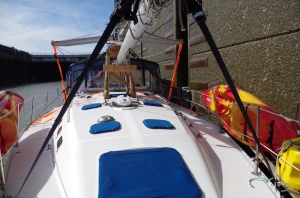 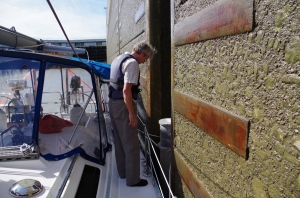 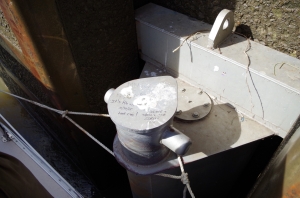 we could see the water flowing over the dam as we motored out of the lock.  Apparently the heavy rain we had the past week was still tricking down. 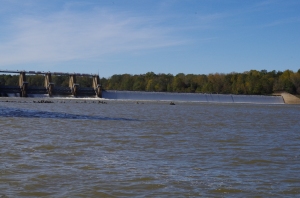 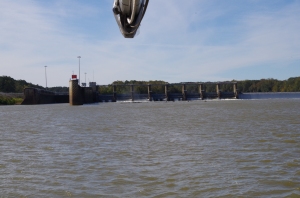 Prior to searching for our nightly anchorage we passed by some sandy beaches. Apparently some of these are used by locals during the summer.

The cliffs are pretty too.

Bryce thought it was time to take the knot out of the loop and make it once again a dock line now that the locks are done till the Erie Canal. 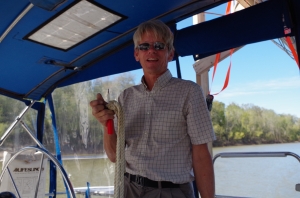 I can tell we are getting more southernly the trees are still green. Now if only the temperatures would warm up a bit more. I feel like we are still in Michigan; at night it often drops to the thirties and forties. 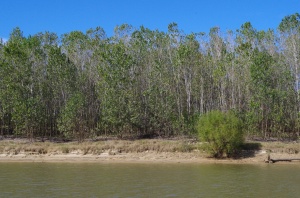 Papper mills must be in the area we saw several areas of cut trees. This must be the industrial area on the river. Apparently this is a power plant on one side and lumber on the other side. I thought the tire around the poles was a great bumper for the tows when they dock up. We could see the sprinkler system spraying the lumber, presumably so it wouldn’t start a spontaneous combustion fire. 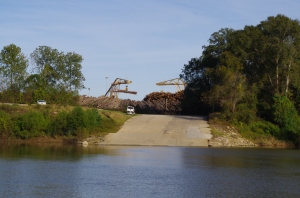 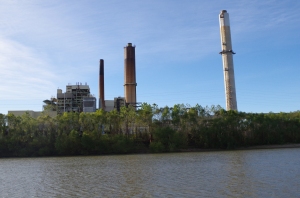 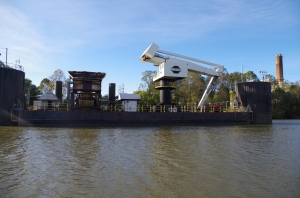 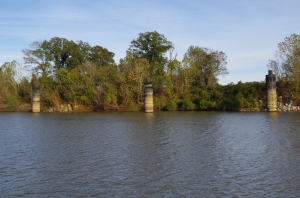 We found this anchorage for the night protected by a buoy. As we prepared for a spaghetti dinner we were passed by this tow & barge.  After we anchor on the river, we like to see a tow go by just to see how it is going to affect us during the night.

After settling in near a sandy beach, we toasted with a shot of Goldschlager to our success of making it through the 28 locks. We watched the sunset; what a great night.