Five broke loose at 4 AM on Sunday.  Two days later on Tuesday, she was found floating upright; none the worse for wear.  And she took on no water.  Just like the small lost dog that walked 30 miles to find his master, Five survived two nights alone on the raging Atlantic 30 miles off Hilton Head Island to make her way home.

A Shrimp boat Captain named Captain Skip Toomer found her floating tens of miles off shore.  Captain Skip kindly took Five in tow and seeing the seas building, hoisted her on board to keep Five safe.  He realized there was probably no one on board Five because the crossover tube was clamped for towing. 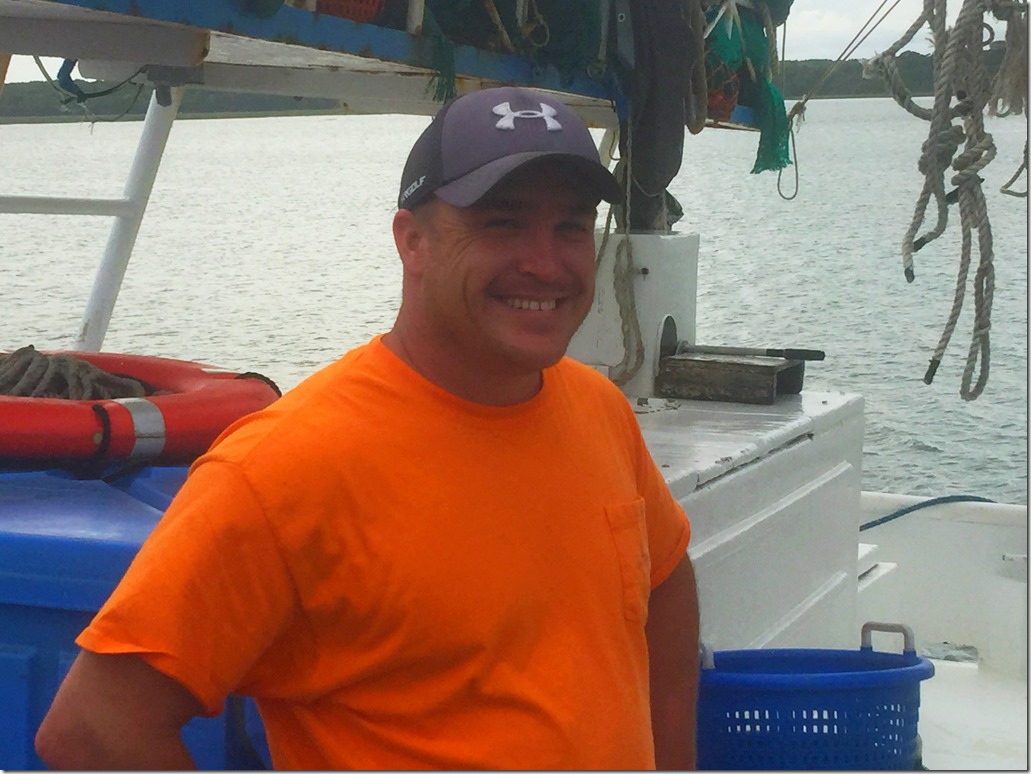 Captain Skip contacted a DNR officer Jay Leary in Beaufort, South Carolina to find the owner.  Jay contacted the Coast Guard.  The Coast Guard found our telephone numbers in their log file from our conversation.  However, two of the numbers were swapped in the three digits following the area code.  So Jay searched the web for area codes and amazingly enough realized the mistake in the swapped digits and called us at 9 PM Wednesday night with the news.

You can see Five on the bow of Captain Skip’s boat. 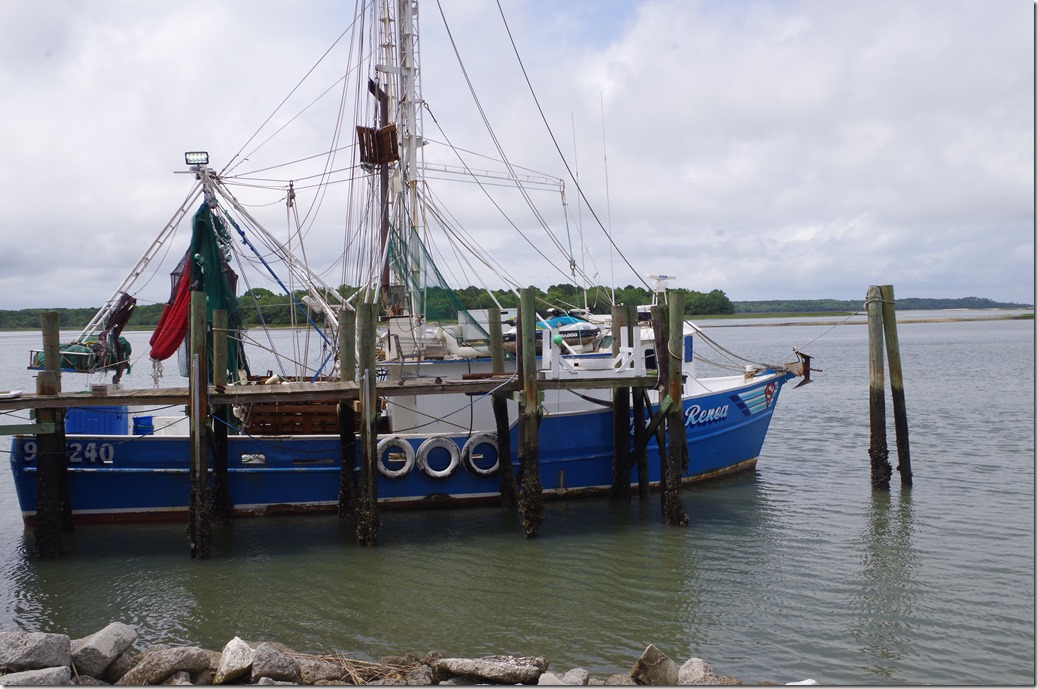 This incredible sequence of events and the combined effort of a two amazing individuals; Captain Skip Toomer and Jay Leary resulted in a happy reunion of Five and her crew on Friday afternoon. Reunited and it feels so good. ( As the song goes.)  The smile has not gone away. We rented a car to go down to Hudson’s on the dock to pick her up.  Bryce drove her back to Charleston.  If you have a chance, stop by “Hudson’s on the Docks” and have a bite to eat.  The staff was quite helpful as we explained our ordeal. And the shrimp was great. 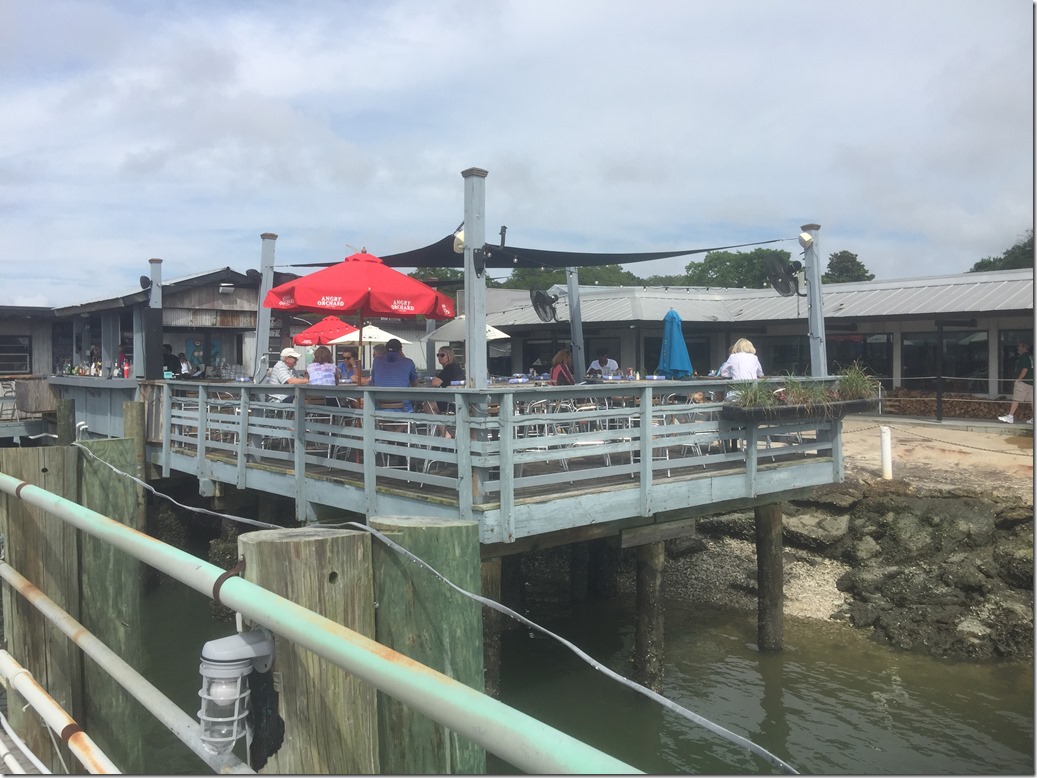 Captain Skip made a harness of lines to take Five off his Shrimp boat. She has a dirty butt. LOL  After dropping Five back into the water,  Bryce climbed on and checked for water in the bilge.  He checked the engine oil for any sign of water.  These two checks told him that Five never flipped over in the two days she was missing.  He then fired Five’s motor up and it purred as normal. 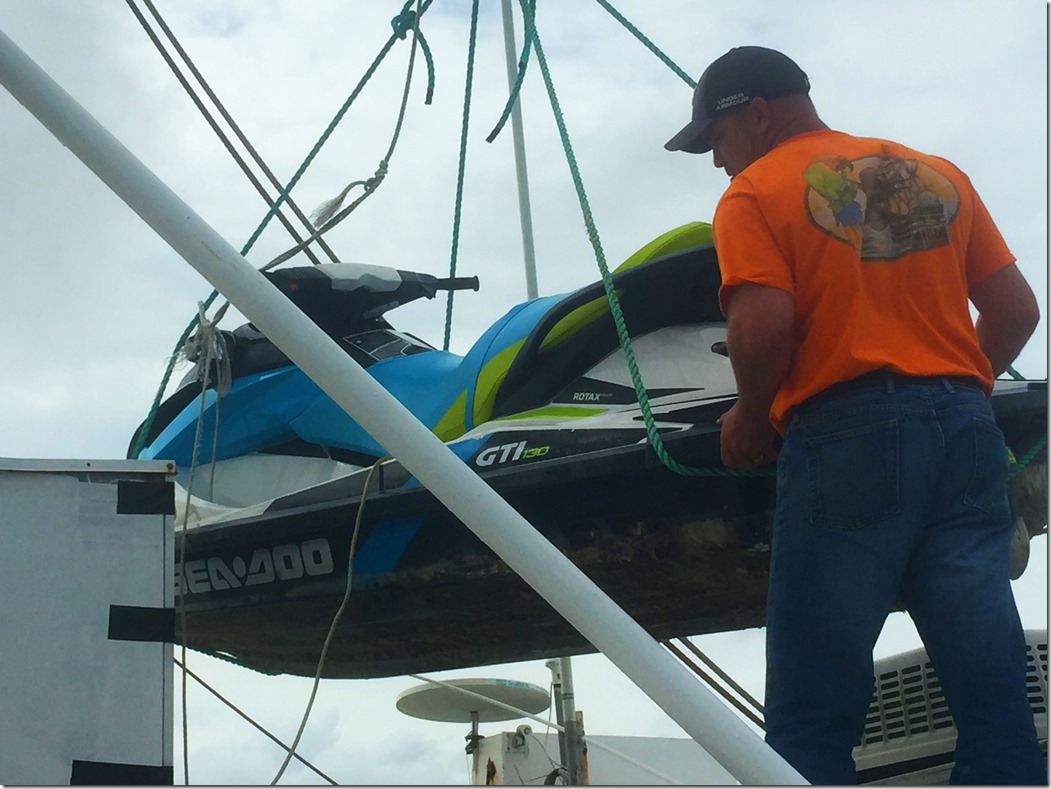 The two guy got to to a floating dock at the Hudson’s On the bay Restaurant where Captain keeps his boat.  Bryce loaded up supplies in Five.  He said his good byes to Skip and shoved off. 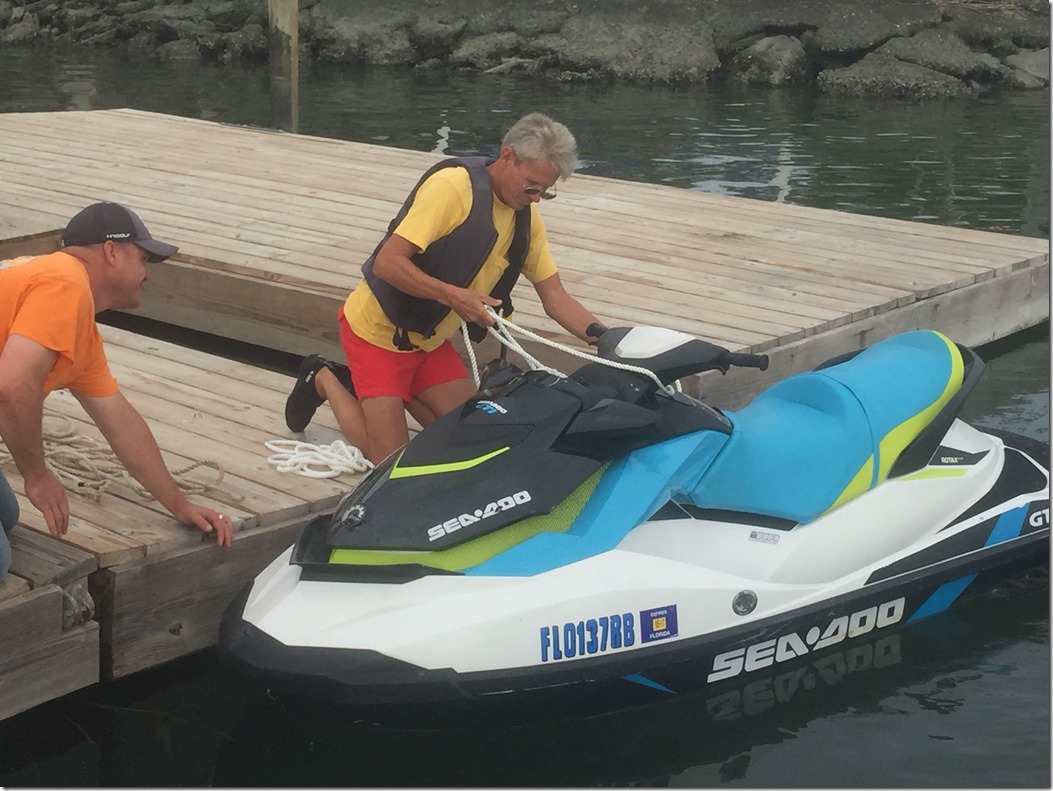 I left the dock shortly after in the car.  A few hours later, I reached the marina. I looked at find my iPhone and noticed Bryce was about 30 miles away.   Just seconds later my phone rang at nearly 8:30 P.M.  “Jane I am nearly out of gas!” There were no gas stations near by.  It was just too dark to bring Five any further.  Bryce had found a launch ramp just off 174 and docked Five there for the night.  I routed the directions to the dock using my Phone and it took me right to him.  I took a large chain and we locked Five to the dock.  I brought Bryce back to Beauty at Charleston with me.    This morning we went back with the gas cans and 5-Alive got her breakfast of unleaded. 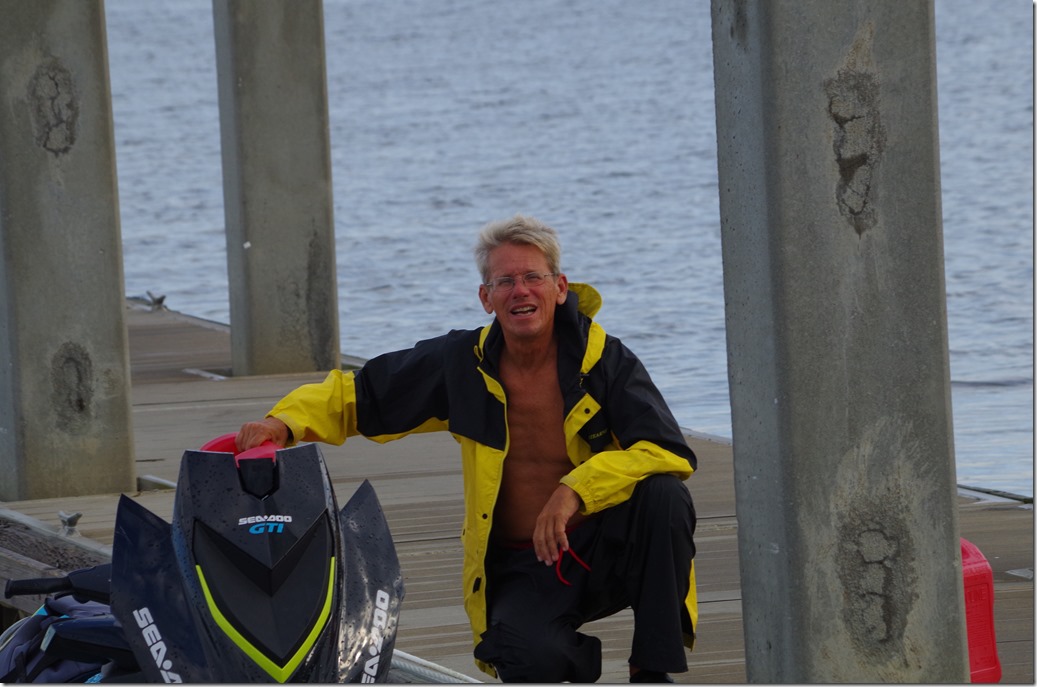 Bryce pulling into the marina with 5-Alive

I got to say, I would love to hear this type of story on the news rather than the constant line of murders and plunder.  “Small jet ski on the ocean gets rescued by a Shrimp boat, Captain and crew”.  I know it was quite the story for us!!  Thanks again Captain Skip!! 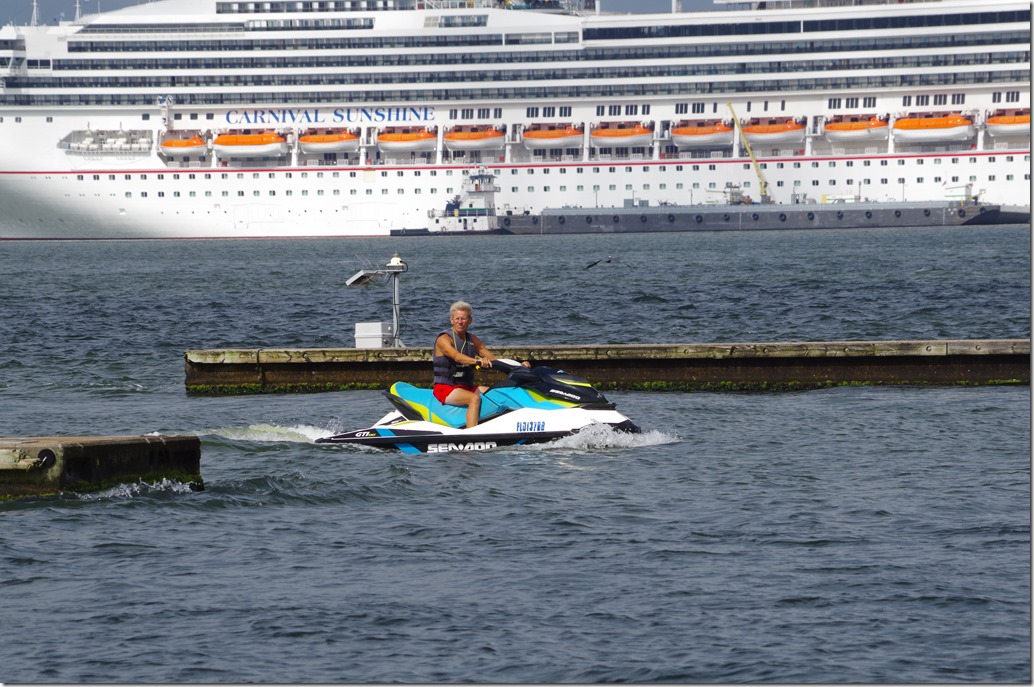 Once again Thank you for following our blog.

9 thoughts on “Five is ALIVE!!, Found floating in the Atlantic after 2 Days”