After spending two nights in Little Falls it was time to head out.  The forecasters were forecasting rain for the day. I was hoping that it would hold off.    Although it was hazy, it was a beautiful morning.  Little Falls city docks  was very clean. They offered nice clean showers to their guest. We meet a couple ridding a tandem bike from Massachusetts to Iowa.   It would be interesting to do that, but my fanny would not allow it. I keep trying new seats, but no luck; so I will stick with sailing. The City docks apparently allows bikers put up their tents for a night.  I have to say. They peddle faster then our sailboat. The do between 50-100 miles a day. They average 10 MPH. We do 5 MPH. LOL 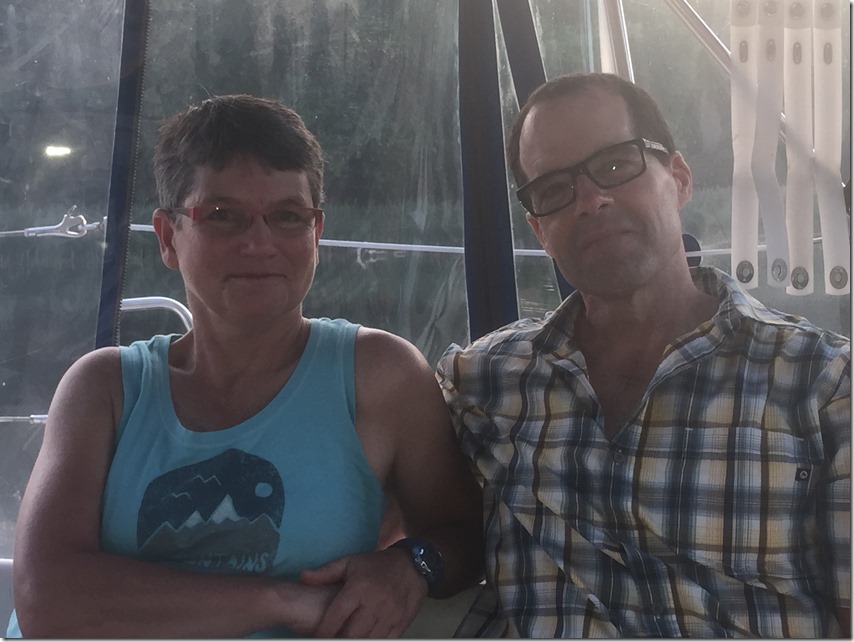 I waved goodbye to the docks are we drove away. It doesn’t look like much but you can fit 7-10 good sizes boats there.  And the town is a short walk away.  The Blue tug here is the Gov Roosevelt. Built in 1901.  It was originally steam, but later converted to diesel. It has exposed rocker arms on the diesel engine. 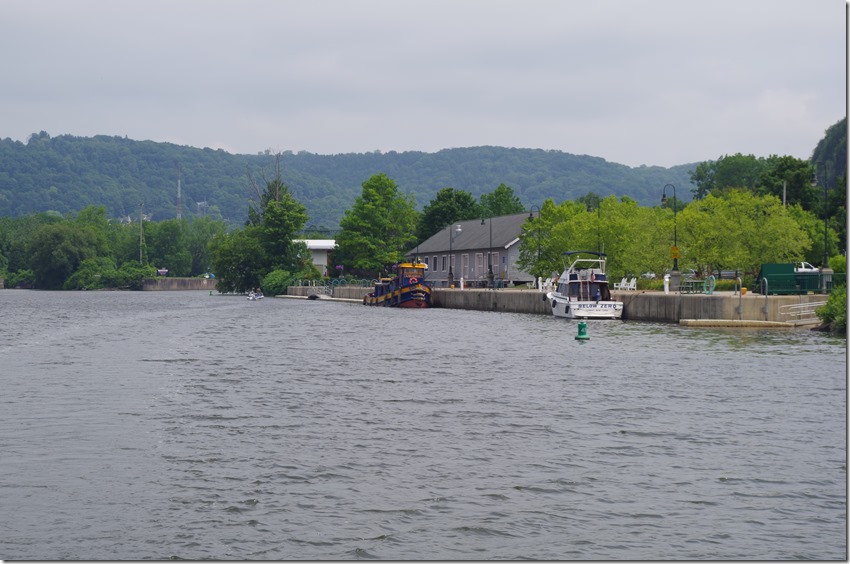 We traveled up the canal and noticed they were unloading a barge.  It was full of dredging from the Erie Canal.

It was only 4 miles up the canal we ran into lock 18 (Herkimer). It is amazing that when you spot a lock; that is all there is. You either turn around or lock up.

You can also take a Erie Canal cruise while exploring the canal system.  Might be kinda cool for those without a boat.

I like how friendly people are. They always wave and smile.  But I need to draw your attention to the bumpers. I like them; they are so neat looking.   Many of these tugs are incredibly old, but still used by the Canal System. One tug was built in 1901 (Gov Roosevelt) and retired in the 90s. It still runs as a historical boat. These blue boats are for canal maintenance. 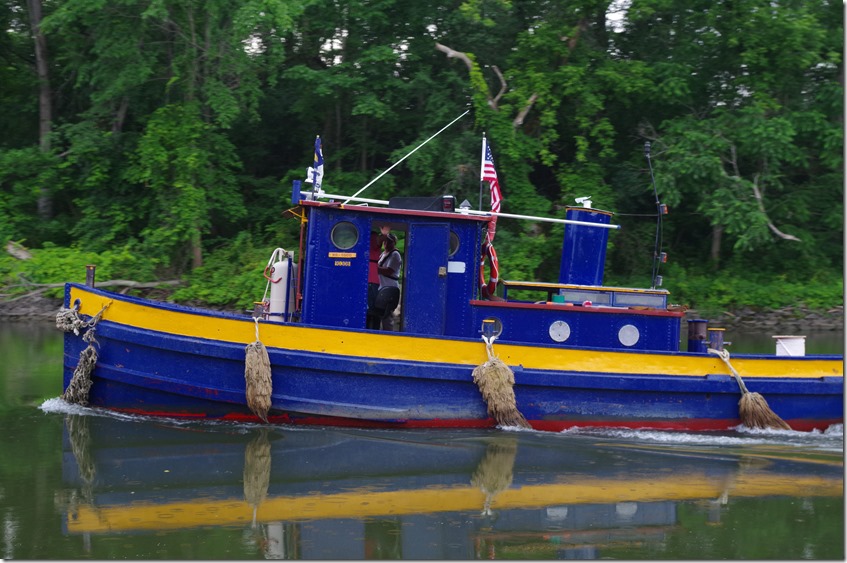 A few miles later we stopped, fueled up and pumped out and we are all set for a while. As we approached lock 19 (Frankfort), we decided to stop for the night.  The rain had begun. When we came up on this sign we didn’t know what to expect.  But as we turned the corner, there was an over head railroad bridge and lock 19 with hardly any wiggle room for the boat.  If you are a boater and are reading this you should wait to pass under the railroad bridge until the lock operator opens the lock.  Just in case someone is locking down. 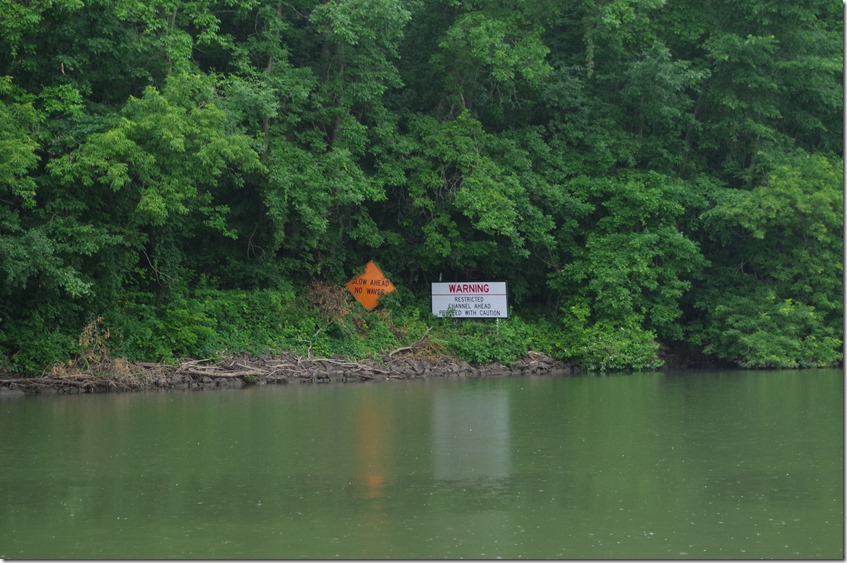 This is a view from behind. Sorry I am having camera (lens) issues.  My zoom lens has bit the dust. The bow of the boat is already heading into the lock.

Because of my inabilities to swim well, I always wear my life jacket. It is under my rain coat.  In the Mississippi, life jackets are mandatory in the locks.  Not in the Erie. We pulled up next to the wall right lock 19 (Frankfort).  It was nearing 5:30 and we didn’t have enough time to get to lock 20 (Whitesboro).

The following day we headed up to lock 20 (Whitesboro).  All these pipes are used for dredging the canal

On this side of the locks, there is a spillway for water overflow next to the north wall.

I have to laugh this is another straightaway like on the Dismal Swamp.

In some areas you will find places to stop and have lunch or dinner while you are cruising.  It is a 1 dollar a foot to tie up for the night. 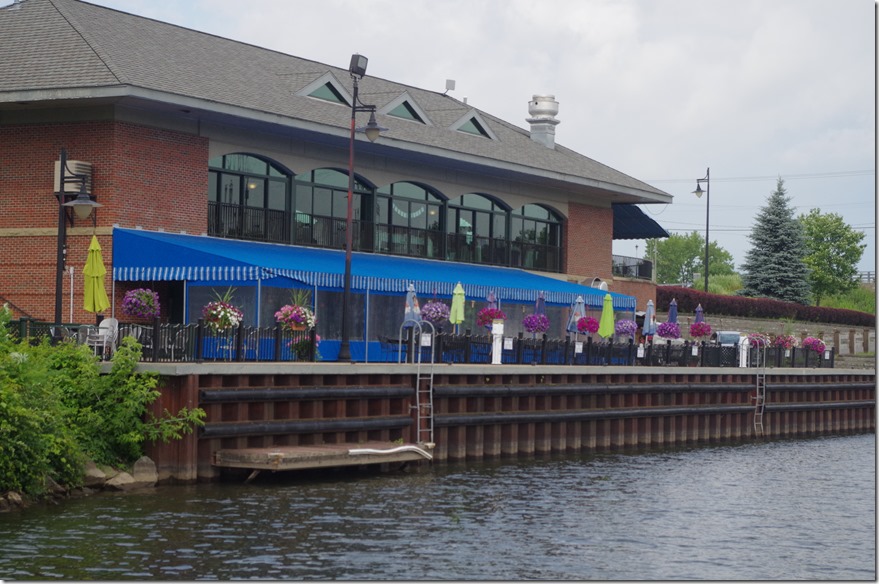 So many different ways to to see the water flow in and out of the canal.

We knew this time we would be sharing the lock with two other power boaters. We were a mile a head of them so we told the lock operator when we contacted him on the VHF that we didn’t mind waiting for them.  As we approached the lock we fought gusty winds from behind. It took us a few times to reach our lines on the wall to hold on too.  We finally got settled in.  We waited for the powerboats to join us. The wind was really gusty. The wind grabbed the first powerboat, a 40 foot cruiser and turned them sideways in the lock. Now these locks are not that big.  Bryce tied his line off the springer.  The women was yelling at her husband who couldn’t hear her.   “I have to let go I can’t hold on any more”  her voice trembled in fear.  “We are going to hit the sailboat.  Go… Go turn us around.. get us out of here” her voice pleaded.  But her husband was trying to push the stern of his boat off the other wall.  Bryce was sitting off the back of Beauty  holding their boat off with his feet.  They finally turned around and headed back out of the lock.

Wait… crap they are headed back in.  I need an extra shot of Goldschlager for this. LOL.. I closed my eyes and said a prayer. This time they made it in were able to grab there lines. The next power boat took the east wall. I think he was the smartest of all. The wind blew him right to his lines. Lucky stiff. The doors closed and we were all  being lifted up. Bryce and I took a deep breath.  The lock operator  was just opening the doors when we heard the women screaming again. I couldn’t help but laugh… Her dog tried to abandon ship.

Dark clouds are over their heads.  I sure hope their day gets better.

Here is an interesting fact. Lock 21 (New London) is the start of the locks going down instead of up. We must be coming to the other side of the mountains. This didn’t even look like a lock to me.  But after we pulled closer, I could see the doors of the lock.

Lock 22 (Sylvan Beach) was just a mile away. They were quite close.  We ended staying two nights over the weekend here at Sylvan Beach to wait out the rain storms. Today (Monday) we will head a cross Oneida Lake to Brewerton New York.

As always Thank You for following us.